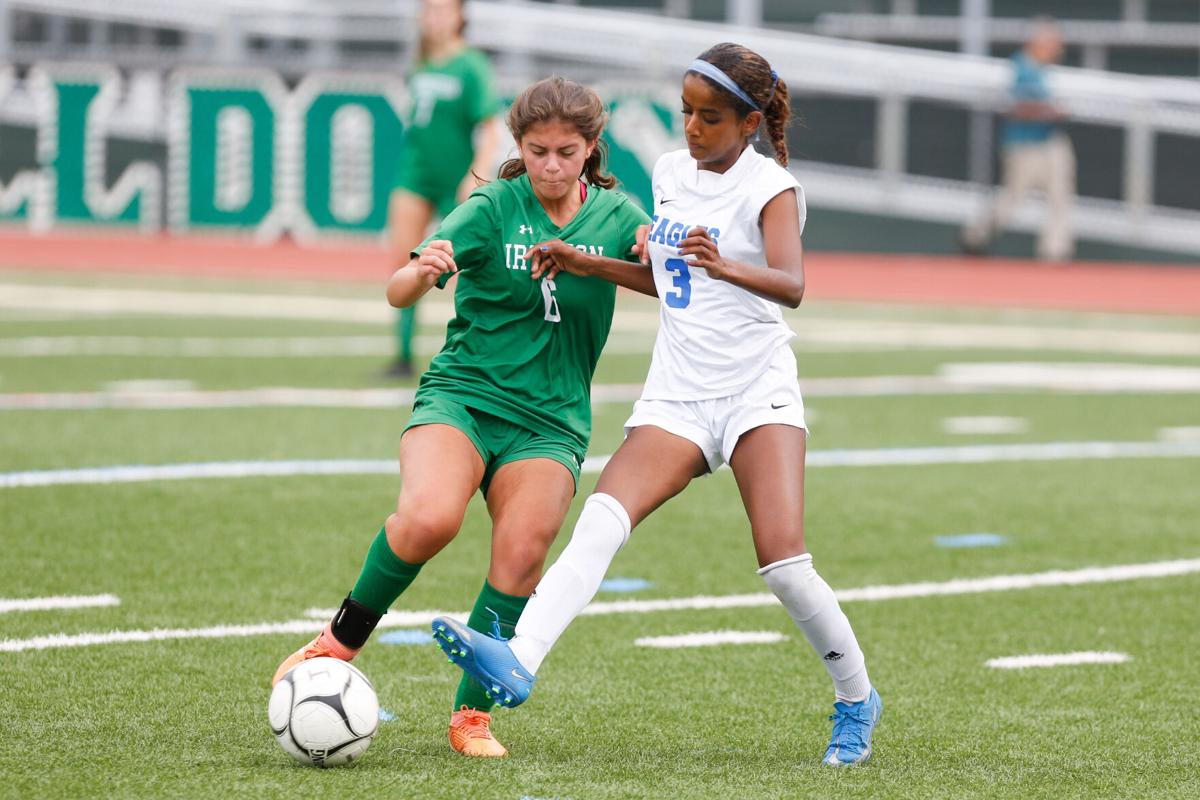 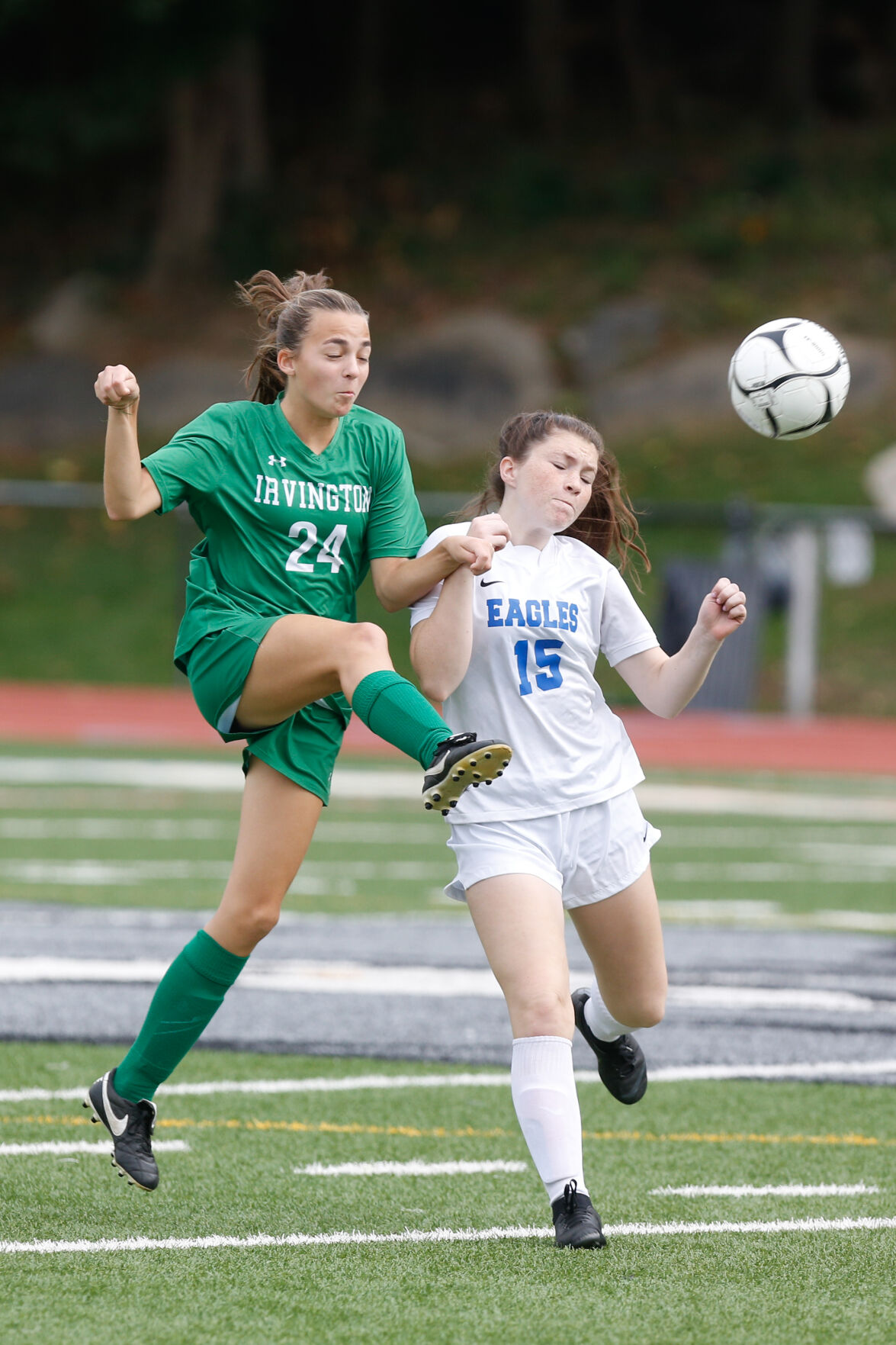 Irvington has had a memorable season and garnered the third seed in the Section 1 Class B playoffs. The Bulldogs will host the winner between sixth-seeded Hastings and No. 11 Valhalla in the quarterfinals on Monday, Oct. 25. Hastings and Valhalla squared off Oct. 18, in the first round.

“We have the talent to make a strong impact in sectionals but need to remain present and just take one game at a time,” Irvington coach Patrick DiBenedetto said. “While we are playing quality soccer, there is always more work to do. Every team competing wants the same thing. We need to continue to work hard, stay connected, and enjoy the game."

“The team was maintaining solid possession and goal driven in the last two games leading into sectionals,” DiBenedetto said.

Behind a pair of goals from Kaitlyn Krieger, Irvington topped host Hastings 5-1 in a league game on Oct. 14.

Niki DeNardo and Alyson Raimondo tallied a goal and an assist apiece for the Bulldogs. Amanda Raimondo scored the other goal. Claire Frielander, Sofia Rosenblatt, and Allie Cloutman passed for an assist each. Sara Gavagan made eight saves in net.

Irvington then went on to cruise past visiting Dobbs Ferry 6-0 in another league contest on Oct. 16.

DeNardo, who has a team-high 13 goals and 15 assists on the season, led the way with a goal and two assists. Addie Dring, Krieger, Elise Harcsar, Olivia DeNardo, and Gavagan scored a goal each. Rosenblatt dished out two assists while Keira Nyarady and Amanda Berry had one assist apiece. Gavagan and Dring combined for three saves.

Cameryn Bell made 12 saves in net for the Eagles.

Dobbs Ferry battled to a 0-0 tie with Edgemont on Oct. 14. The Eagles received the No. 13 seed in the Class B sectionals and travel to fourth-seeded Pleasantville for the opening round this Friday, Oct. 22.

Ardsley concluded its season with a 4-1 loss to Pelham on Oct. 13 and 6-1 defeat at the hands of Eastchester on Oct. 16. Sofia Finnerty scored the lone goal against Eastchester.

Irvington received the top seed in the Class B sectionals and netted a first-round bye. The Bulldogs will host the winner of eighth-seeded Edgemont and No. 9 Albertus Magnus in the quarterfinals this Saturday, Oct. 23.

Isaiah Boyles had an assist while Liam Sawian stopped three shots in net for the Bulldogs.

Irvington concluded the regular season with a big 2-1 win over visiting Bronxville, the No. 3 seed in the Class B sectionals, on Oct. 14.

“It was a great test for us against a really good league team,” Irvington coach Bernie Keating said. “Each time we play we learn a little bit more about our players and our team, and hopefully we can use these experiences to get better as a unit.”

Boyles got the Bulldogs out to the early 1-0 lead with a goal in the first 10 minutes of the game on a cross from Arjan Delija.

Bowring made it 2-0 in the second half with Delija getting the assist again as he sent ahead a perfect through ball. The Broncos were able to cut it to a one-goal game but couldn’t find the equalizer.

“The Bronxville game was a good battle,” Keating said. “Both teams fought really hard and had good chances to score. I believe that we built the lead by finding good open pockets of space on the field and making the most of our chances.”

Sawian made eight saves to preserve the win for the Bulldogs.

Hastings defeated visiting Dobbs Ferry 2-0 on Oct. 15 with Camilo Granada-Cossio scoring both goals for the Yellow Jackets. Zeke Manly had one assist.

The Yellow Jackets received the No. 12 seed in the Class B sectionals and were scheduled to travel to fifth-seeded Briarcliff for the first round on Oct. 21.

The Eagles netted the No. 11 seed in Class B and were scheduled to travel to No. 6 Croton-Harmon for a first-round game on Oct. 21.

The Panthers received the No. 16 seed in Class A and were scheduled to host No. 17 Hendrick Hudson in a Class A outbracket game on Oct. 20.