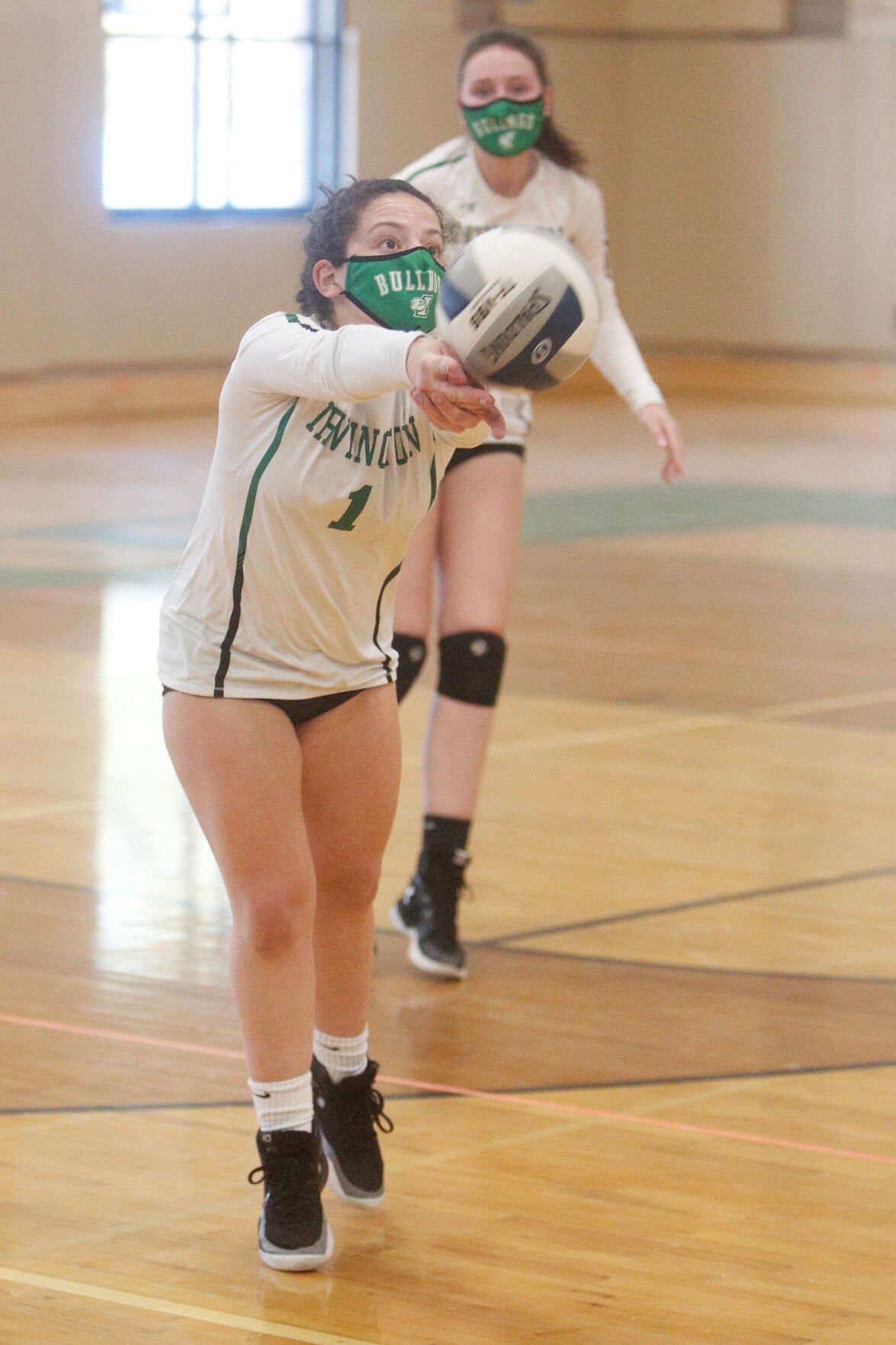 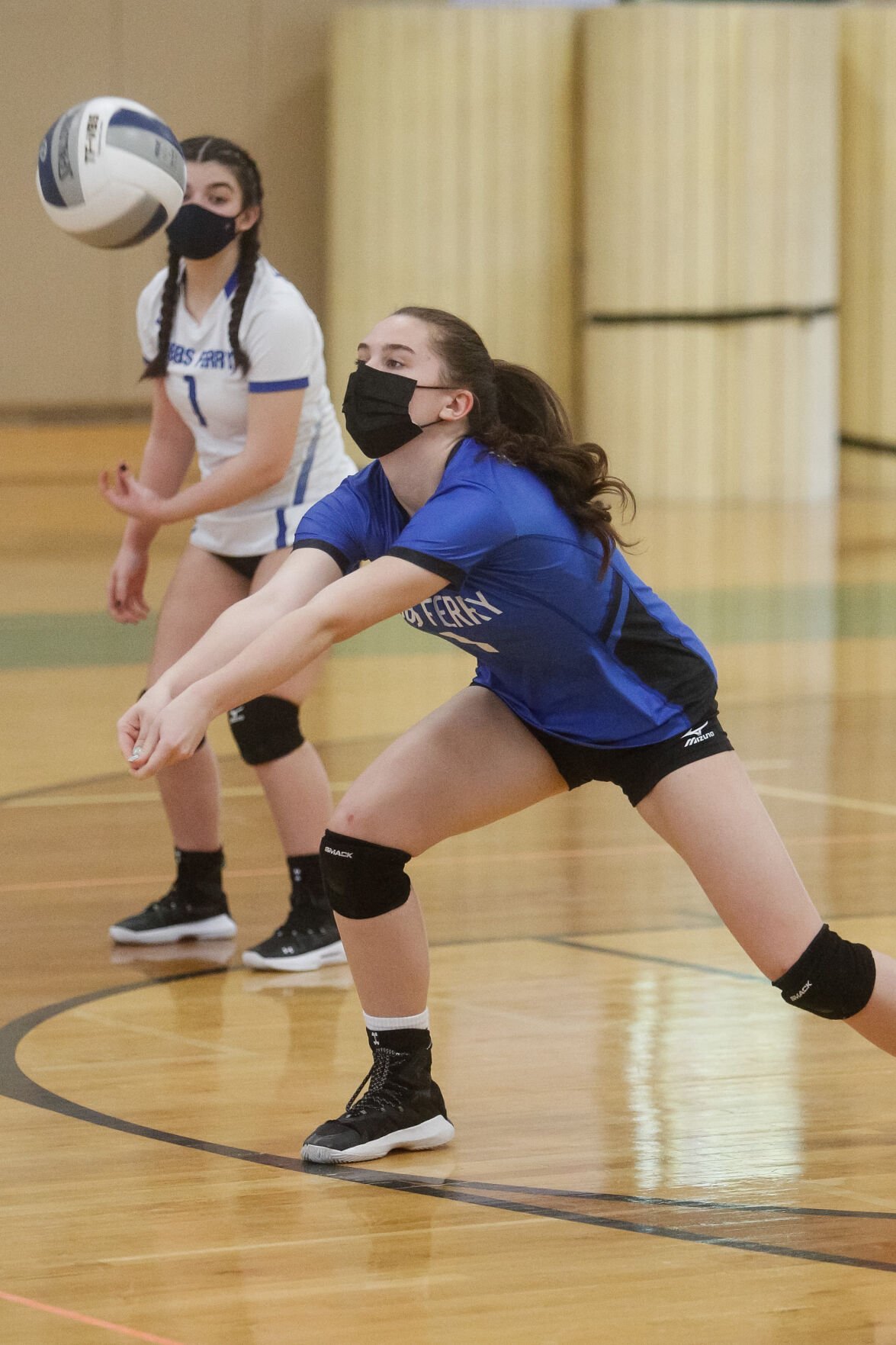 Dobbs Ferry’s Liberty McCormack had 12 kills and 21 digs against Irvington. 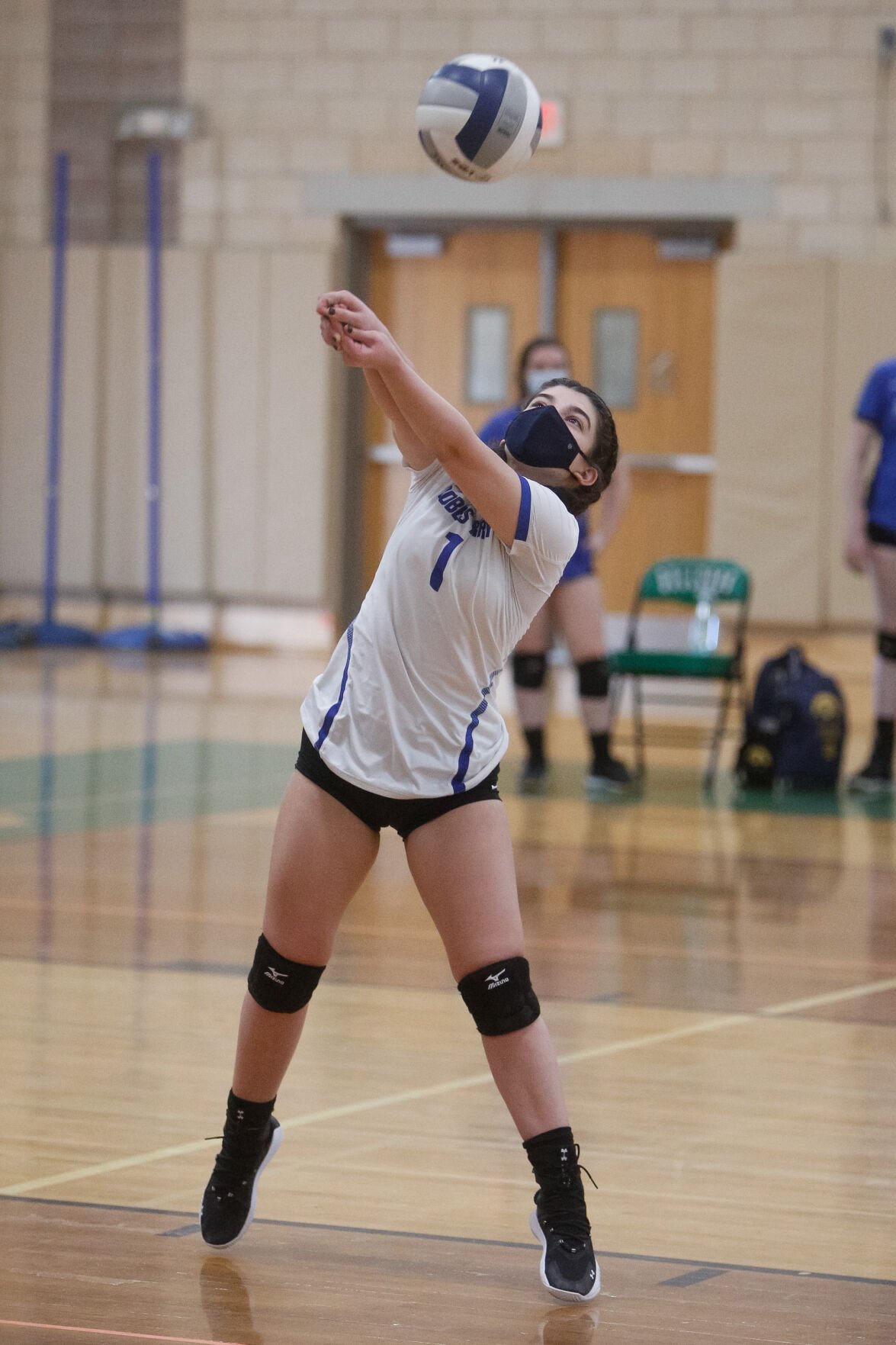 Dobbs Ferry’s Liberty McCormack had 12 kills and 21 digs against Irvington.

Dobbs Ferry avenged a pair of three-set losses to Irvington, upsetting the host Bulldogs in four sets on April 20 in the quarterfinals of the Southern Westchester Small Schools sectional playoffs.

Tuesday’s first set was tightly contested, with Dobbs Ferry leading 22-17 after miscommunication on the Irvington side allowed the ball to fall to the floor. The Bulldogs battled back and, after a return by Sydney Birkhahn, pulled to within a point at 22-21. The teams split the next four points, leaving Dobbs Ferry with a 24-23 lead. During an extended rally, Birkhahn’s return was ruled to have gone outside of the net antenna, giving the Eagles the decisive point.

The second set was a wild affair. Dobbs Ferry led 24-21, but the Bulldogs scored the next three points to level the contest at 24-24. A service error by Irvington put the Eagles at set point at 25-24, but Dobbs Ferry followed with a service error of their own to knot the set at 25-25. A Birkhahn ace gave Irvington a 26-25 advantage. A Dobbs Ferry hitting error ended the second set.

An ace by Liberty McCormack gave the Eagles a 23-18 lead in the third set. A hitting error by the Bulldogs was followed by a kill by Dobbs Ferry’s Talia Reith off of a set by Anabel Patino that gave the visitors the third set.

Dobbs Ferry pulled away for the fourth-set win and the match victory. Leading 19-17, the Eagles picked up a point on an Irvington hitting error, which was followed by an ace by Dobbs Ferry’s Clare Geratz. McCormack then sent a Patino pass to the floor for 22-17 lead. Irvington called a timeout. After a Bulldogs point, McCormack again sent the ball to the floor in the Irvington half of the court, this one off a pass by Kayla Halvorsen. The Eagles’ Colleen Sweeting followed with a block that brought the Eagles to match point at 24-18. Irvington staved off defeat for a point before McCormack ended the match, converting a feed from Halvorsen.

McCormack led Dobbs Ferry with 12 kills and 21 digs. The Eagles also received nine kills and three digs from Reith; six kills, 14 digs, and 10 aces from Geratz; 17 assists and seven digs from Halvorsen; and five kills from Sweeting. Irvington was paced by 10 kills from Amanda Gilbert and 28 assists from Birkhahn.

ARDSLEY received 21 kills from Rory McNerney and posted a 25-8, 25-17, and 25-20 sweep of sixth-seeded and visiting Edgemont on April 20 in a Southern Westchester Small Schools tournament quarterfinal.

The third-seeded Panthers advanced to the semifinals against second-seeded Rye Neck on April 22. Rye Neck, a four-set winner over 10th-seeded Valhalla in the quarterfinals, hosted Ardsley.

Ardsley dominated the first set against Edgemont, the final two points of the 17-point win coming on a McNerney kill off of a Morgan Fodiman set, followed by a Madison Gordon ace.

The second set was not as one-sided as the opener, although Ardsley was in control throughout. Leading 21-14, Isabella Miller’s spike was followed by a Fodiman ace that put the Panthers up 23-14. Edgemont scored three of the next four points before a Gordon kill off a pass by Fodiman ended the second set.

During the third set, McNerney recorded three kills that brought the Panthers to set and match point at 24-20 — the last kill giving the senior 1,000 kills for her career. The match ended with a hitting error by Edgemont.

McNerney added two aces and 17 digs in the win. Ardsley also received 14 kills, six aces, and two digs from Megan Bruno, as well as eight kills, three aces, and eight digs from Gordon. Lexie Meltzer had an ace to go along with 24 digs and an assist for Ardsley, which also picked up three kills and four digs from Miller. Fodiman ended the afternoon with 40 assists, two aces, and a dozen digs.

HASTINGS, the eighth seed in the Southern Westchester Small Schools field, was awarded a forfeit win on April 19 over ninth-seeded Tuckahoe, who bowed out of the tournament because of Covid protocol. The Yellow Jackets then fell in three sets at top-seeded Blind Brook the next evening in a quarterfinal-round match. The Trojans advanced by scores of 25-21, 25-18, and 25-9.

A tip by Melissa Nadler brought the Jackets to within 21-17 in the first set and started a run during which Hastings won five of eight points to close to 24-21. Blind Brook, though, closed out the opening set with a block.

Blind Brook moved out to a commanding 19-12 advantage in the second set before Hastings rallied to 20-17. The Trojans settled down, though, and pulled away for the seven-point victory.

The top-seeded Trojans then left little doubt in the third set, cruising to the 16-point win.