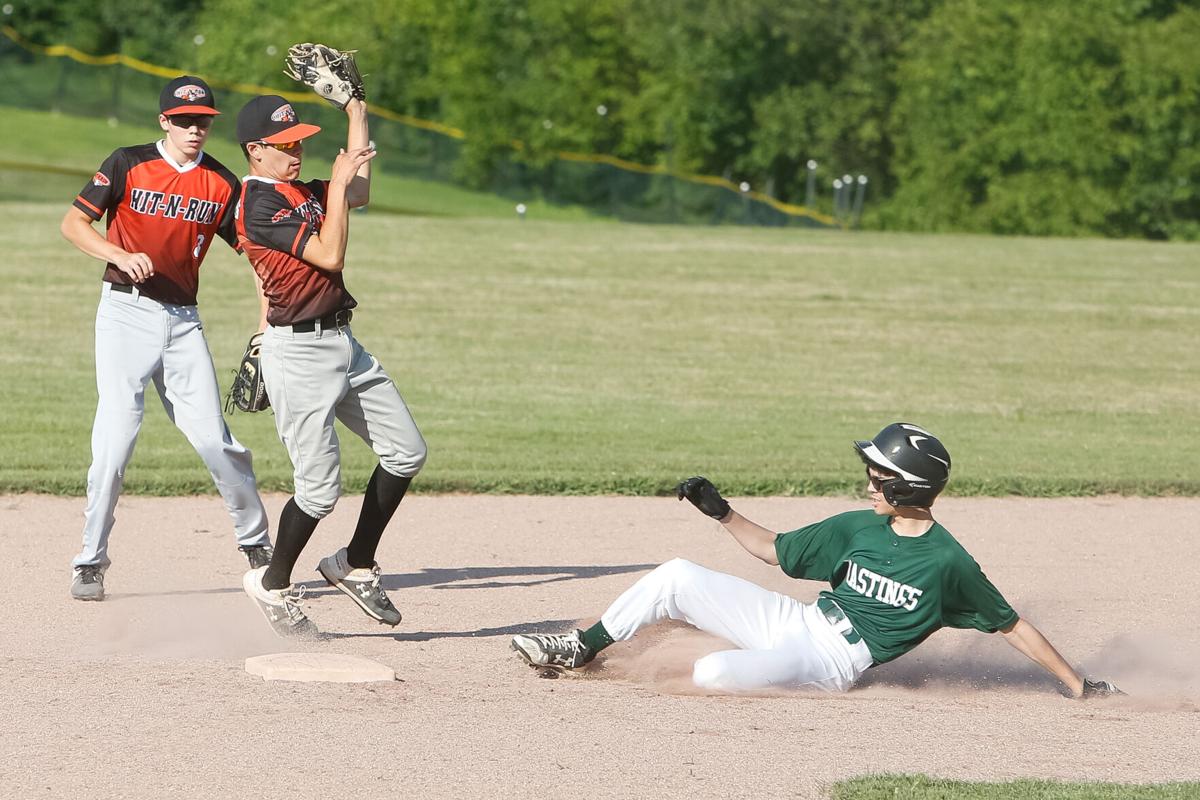 Brandon Harding of Hastings slides into second base against Hit-N-Run. 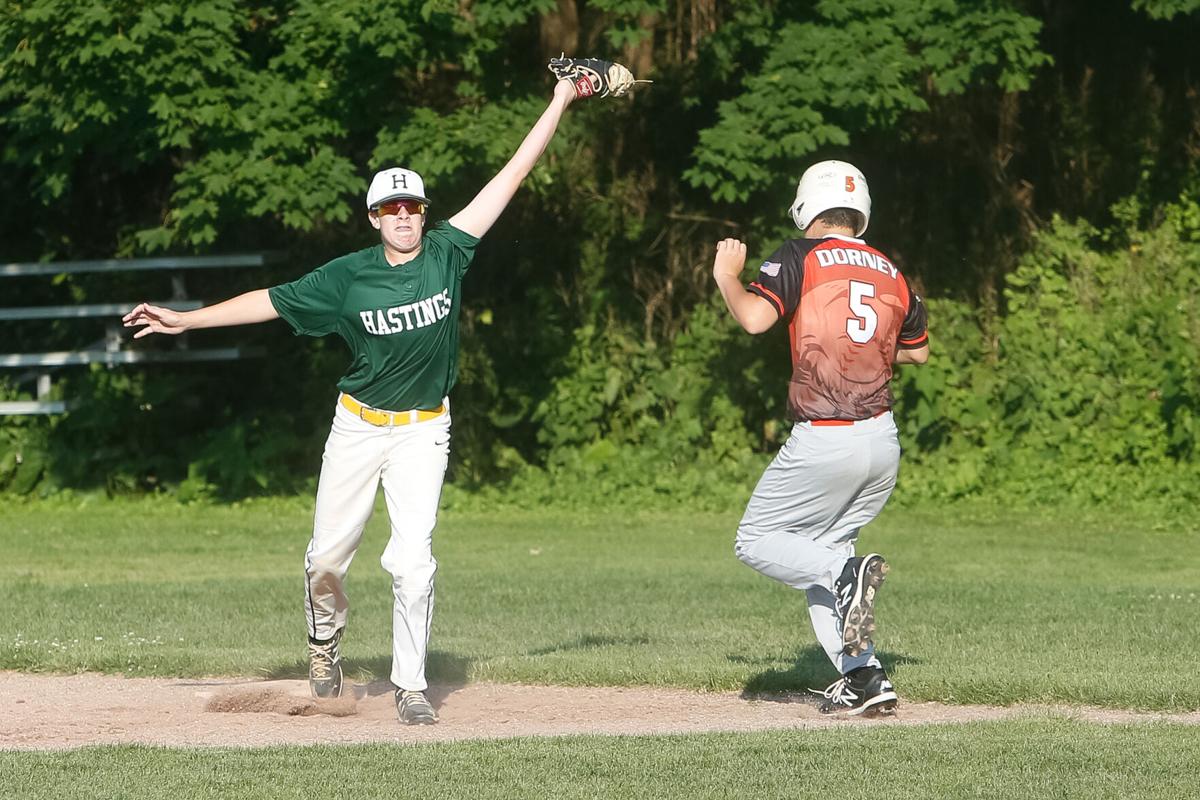 Jake Schulman of Hastings catches the ball at first base against Hit-N-Run.

Brandon Harding of Hastings slides into second base against Hit-N-Run.

Jake Schulman of Hastings catches the ball at first base against Hit-N-Run.

The Hastings 14U Yellow Jackets stretched their season-opening winning streak to five games this past week before succumbing to White Plains’ Hit-N-Run Academy, 4-1, on July 21 at White Plains High School.

Until that defeat, the Yellow Jackets’ formula for success had been dominant pitching and outstanding defense.

The stretch began on Monday, July 13, when Hastings travelled to Eastchester’s Saggese Field to take on Tuckahoe/Eastchester Baseball (TEB). Three Hastings pitchers combined for the shutout on their way to a 10-0 win.

Will Brody opened with three scoreless innings and was followed on the mound by James Constantine, who went two frames and struck out five. Jake Schulman then came on to toss the last two scoreless stanzas.

On Wednesday, July 15, Hastings returned home to the Burke Estate to face the New Rochelle Knights and came away with a 12-2 win.

Luke Ciszewski won his second game of the season, pitching four innings and not allowing an earned run.

Meanwhile, the Hastings bats shined in this one, with big hits coming from Erik Ghalib and Constantine.

Dominick Moore reached base twice when hit by pitches in the victory over New Rochelle.

The perfection continued last Friday, July 17, with a 6-1 victory over the talented White Plains Hit-N-Run Academy team at the Burke Estate.

Keith Capuano got his first start on the hill and did not disappoint, going five innings and giving up only one run. Capuano helped himself with two hits and scored twice.

Brandon Harding flashed the leather, making two outstanding catches in centerfield and throwing a runner out at the plate.

“Our pitchers are throwing strikes and our defense has been stellar so far,” 14U manager Steve Schulman said. “Whenever we need to make a big defensive play, we seem to make one.”

The 14U Yellow Jackets continued their unblemished streak with a 5-0 blanking of the Putnam Valley Wild at the Burke Estate on July 19.

Hastings 14U now stands at 5-1 on the season in the Greater Hudson Valley Baseball League (GHVBL).

Sherman Park got off to a quick start thanks to a bases-loaded double by Aiden Menendez in the top of the first inning that gave the visitors a 2-0 lead. However, with Sherman Park runners on second and third and just one out, Ardsley’s Jackson Kaye struck out the next batter before catcher Justin Wachen picked off the runner on third to end the threat.

Ardsley took command of the game in the third inning. Charlie Zirlin started things off with a single. After a walk and a hit by pitch, Ardsley had the bases loaded with just one out. Sherman Park’s pitcher then walked the next three batters to give Saw Mill Tavern a 3-2 lead.

Kaye then ripped a line drive single to centerfield to make it 4-2.  Jake Tucker followed with a walk to push across another run to make it 5-2.  After a strikeout, Josh Lukin singled to centerfield, knocking in two runs to give Ardsley a comfortable 7-2 lead.

Ardsley continued its domination in the home half of the fourth inning. After two walks and a single by Sam Levi loaded the bases, Leo Blank grounded into a fielder’s choice that scored Max Grachan to make the score 8-2.  Wachen followed with a long single to right field, scoring Parker Small and Blank to make it 10-2. A Justin Paley double then scored Wachen.

Kaye followed with a single to left, scoring Paley and bringing the tally to 12-2.

After walks to Tucker and Lukin and a groundout by Will Hargreaves, Zirlin’s single to centerfield plated Kaye and Tucker to make it 14-2. Grachan then smashed a double to the left centerfield wall that sent Lukin and Zirlin home with Ardsley’s final two runs.

After struggling a little in the first inning, Kaye settled down and pitched a stellar 3 2/3 innings, giving up two runs on just one hit while striking out six.

At the plate, Wachen knocked in three runs, while Paley, Kaye, Lukin, Zirlin, Grachan, and Blank each had two RBI.