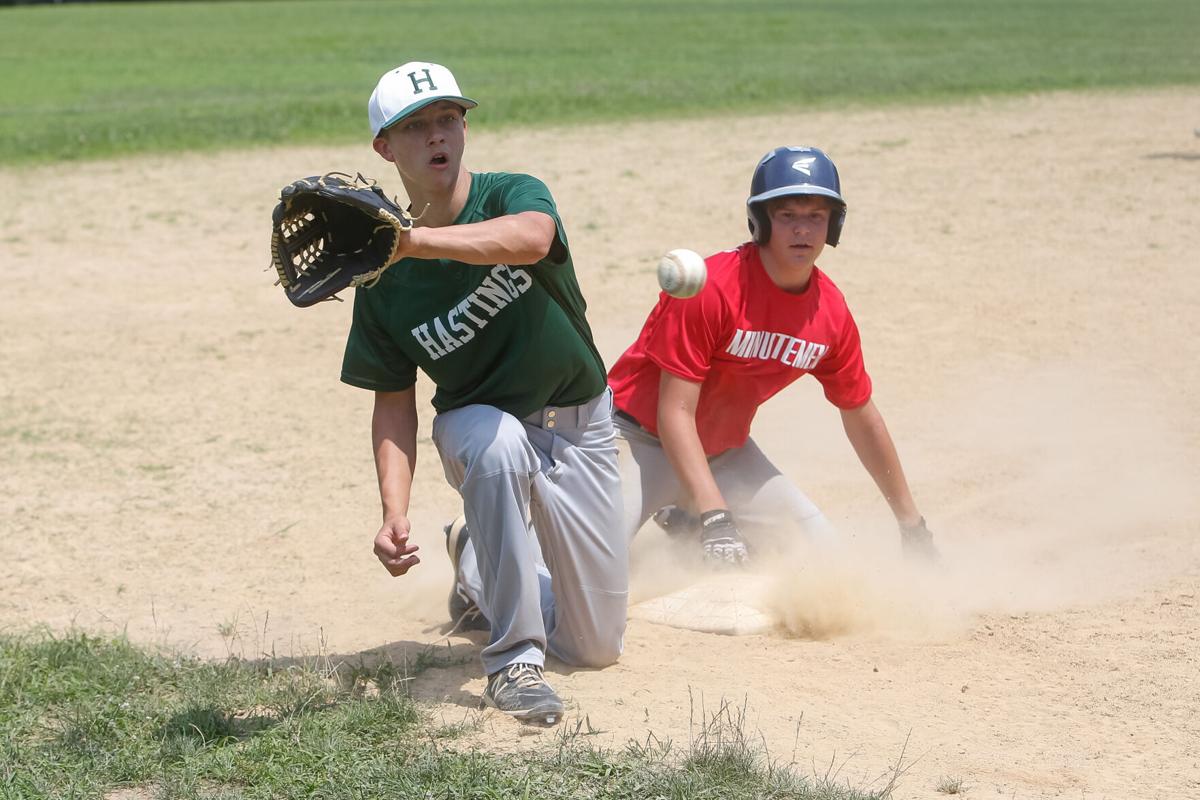 Hastings’ Kevin Dosin awaits a throw at third against the Peekskill Minutemen. 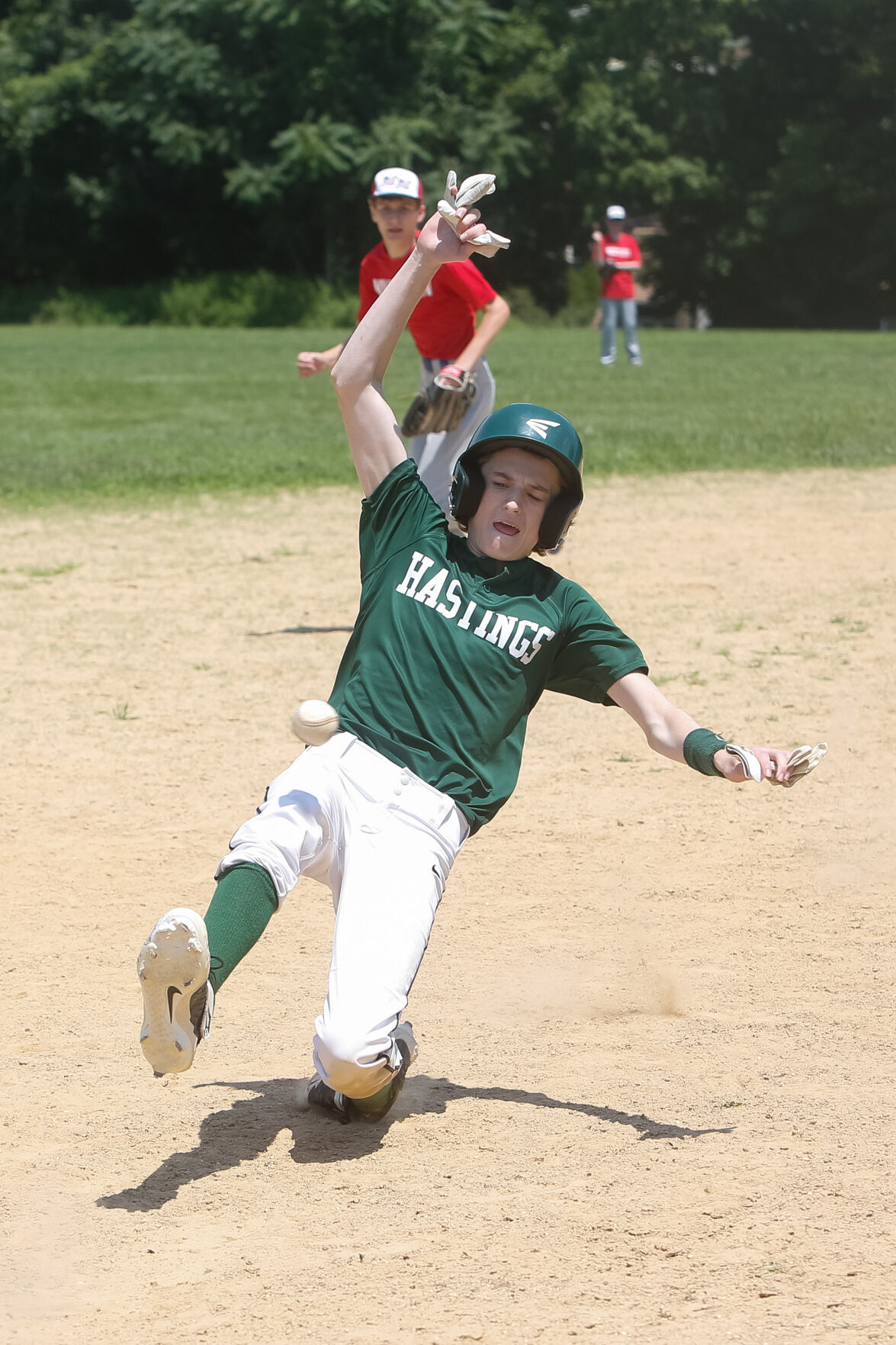 Hastings’ Hunter Mitchell attempts to beat a throw to third against the Peekskill Minutemen.

Hastings’ Kevin Dosin awaits a throw at third against the Peekskill Minutemen.

Hastings’ Hunter Mitchell attempts to beat a throw to third against the Peekskill Minutemen.

The Hastings 14U Yellow Jackets improved their overall record to 7-1 in the Greater Hudson Valley Baseball League with a pair of wins this past week, downing the Westchester Bulldogs, 3-1, on July 22 and notching a 4-1 victory three days later against the Putnam Valley Wild.

The win over the Bulldogs at the Burke Estate was a classic pitchers’ duel with both hurlers posting zeroes on the scoreboard for the first four innings. For Hastings, it was ace Keith Capuano controlling the strike zone and the game. Capuano ended up pitching 6 1/3 innings, giving up only one run.

In the fifth inning, Hastings broke through with two big runs. Jason Nadler had a big two-out hit, driving in the rally.

The Bulldogs answered with one run in the top of the sixth. However, in the bottom of the frame, Hastings tacked on one more run, making it 3-1 and setting up a dramatic seventh inning.

The Bulldogs quickly got two on and, with one out, James Constantine was called in from the Hastings bullpen to shut the door. After one walk to load the bases, Constantine struck out the next two swinging to save the victory.

“James came into a real tough spot and got the job done,” Hastings manager Steve Schulman said. “This was big-time save.”

Next up for the Yellow Jackets was a road trip to Putnam County. Again, the game would be tight.

Holding a slim 2-1 lead heading into the seventh inning, Hastings’ bats tacked on two important insurance runs. The rally included a bunt base hit by Luke Ciszewski, a sacrifice fly RBI by Brandon Harding, and three straight, two-out hits by Jake Schulman, Erik Ghalib, and Lucas DeJesus that plated the final run in the hard-fought 4-1 victory.

“We are having a blast getting to play baseball, and each game is just another chance for us to improve,” Yellow Jackets bench coach Peter Ciszewski said.

Meanwhile, the Hastings 16U season continued with the team, coached by David Dosin and assisted by his son Brian and Peter Ciszewski, going 2-0-1 to move into second place in the B Division. The team’s current record is 4-3-2.

“I came out of retirement to coach this year because the kids were not able to play baseball in the spring due to Covid-19,” the elder Dosin said. “I asked Brian, ‘What do you think?’ And he said, ‘Let’s do it.’ I sent out an email and received overwhelming support for a team. We have many safety protocols in place, such as mask wearing if you cannot social distance, hand wipes for players and equipment, and hand sanitizer available.”

On July 22, the 16U team traveled to Yonkers to face the AYYA Rebels. The game was called in the sixth inning due to lightning and approaching storms with Hastings leading 7-4, but because the inning could not be completed the game reverted to the fifth inning when the game was tied 4-4.

Jake Ciszewski pitched five innings for Hastings and settled for the tie. At the plate, Hastings was led by Tyler Ossen and Leo Belsky, who each went 2-for-3 with a triple.

Hastings was able to take a 2-1 lead after the first inning, but the Rebels came back scoring three runs in the second inning and took a 4-2 lead. The score remained 4-2 until the fifth inning when Ossen hit a triple and scored on Kevin Dosin’s sacrifice fly to cut the lead to 4-3. Belsky hit another triple and scored on Frankie Kowal’s single to even the score at 4-4.

In the sixth inning before the game was called, Hastings scored three runs on hits by Anthony Puoti, Ollie Fuchs, and Patrick Walsh.

On July 23, Hastings hosted the Shrub Oak Storm at the Burke Estate. Hastings was led by a strong pitching performance from Dosin, who pitched five solid innings for the victory. The Storm took a 3-1 lead into sixth inning when the Hastings bats came alive. Hastings scored nine runs in the sixth inning and batted around to take a commanding 10-1 lead into the final inning.

Ossen started the sixth inning with a single and advanced to second base on a single by Dosin. Kowal then walked to load the bases.

Ossen scored on a sacrifice fly by Evan Kaki Haram, cutting the Storm’s lead to 3-2. Belsky came to the plate and launched a rocket to right centerfield to score two more runs, giving Hastings a 4-3 advantage. Hastings went on to score six more runs in the inning on hits by Andrew Dzubak, Puoti, Hunter Mitchell, and Connor Noyes.

Kaki Haram came on to close out the game and earn a save.

On July 25, Hastings hosted the Peekskill Minutemen at the Burke Estate and, behind strong pitching performances by Belsky and Ossen, earned a 14-4 victory.

Dosin began the first-inning rally with a double. Kowal and Kaki Haram walked to load the bases. Dosin then scored on a walk issued to Belsky.

A single by Dzubak scored Kowal and Belsky before Kaki Haram came across on Mitchell’s sacrifice fly.

“It’s great to be out on the field playing ball — we have great kids and they seem to be having fun” David Dosin said.

The Ardsley Saw Mill Tavern Juniors 14U team combined timely hitting, stellar defense, and clutch pitching to come away with a 13-9 victory over the Elmsford Bulldogs in a District 20 matchup at East Rumbrook Park on July 28.

Elmsford got on the board first in the bottom of the first inning.  After a leadoff walk, shortstop Justin Paley turned a line drive up the middle into an unassisted double play. But then, after a single up the middle, Elmsford's Rene Pineda launched a bomb to right centerfield for a double, scoring the runner to make it 1-0.

Elmsford's lead wouldn't last long. In the top of the second, Ardsley quickly loaded the bases thanks to walks to Parker Small and Ryan Tucker and a single by Sammy Kaye.  Leo Blank grounded into a fielder's choice at second, scoring Small, but a wild throw to first allowed Tucker to score as well, giving Ardsley a 2-1 lead.  After a strikeout, Justin Wachen followed with a line drive single to left, scoring Blank.  Jackson Kaye walked and then Jake Tucker rocketed a double to deep left centerfield plating Wachen and Kaye and giving Ardsley a 5-1 lead.

Ardsley built on their lead in the following frame. Max Grachan led off the third with a single to left field. Small followed with a walk. After a strikeout, Sammy Kaye walked to load the bases. Blank then also drew a walk on a 3-2 count, to score Grachan.

Paley, Justin Wachen, and Kaye followed with successive singles that scored three runs and gave Ardsley a 9-1 advantage.  Jake Tucker then hit another monster shot to centerfield that was caught but was deep enough to allow Paley to tag up and score from third to make the score 10-1.

Elmsford fought back. Helped by three Ardsley errors, Elmsford rallied for six runs in the bottom of third, to close the gap to 10-7.

Things got even more dicey for Ardsley in the fourth inning. After a leadoff single and two walks, Elmsford's Zach Phillips roped a single to centerfield to make the score 10-8 with still no outs and the bases loaded.  Having moved from shortstop to pitcher, Paley got out of the jam by inducing a popup and a double-play grounder.

Ardsley bounced right back in the top of the fifth. Blank led off with a walk, and then stole second. After a strikeout, Blank scored on a groundball to second by Justin Wachen that was misplayed by the fielder, making the score 11-8. Jackson Kaye walked, and then after Wachen and Kaye executed a double steal, Jake Tucker was intentionally walked to load the bases for Charlie Zirlin, who came through with a clutch single down the left field line scoring Wachen to make the score 12-8.

Grachan followed with another hard grounder down the third base line. The Elmsford third baseman made a nifty play and was able to get the out at third, but Jackson Kaye was able to score on the play to give Ardsley a 13-8 lead.

Elmsford scored once in the bottom of the sixth.

“I was really proud of the boys,” Ardsley manager Mark Wachen said. “It was a true team effort with everyone contributing. And when things got close at the end, they stayed focused and showed tremendous grit to hold on for the win.”

Jake Tucker, Justin Wachen, and Blank each had three RBIs.