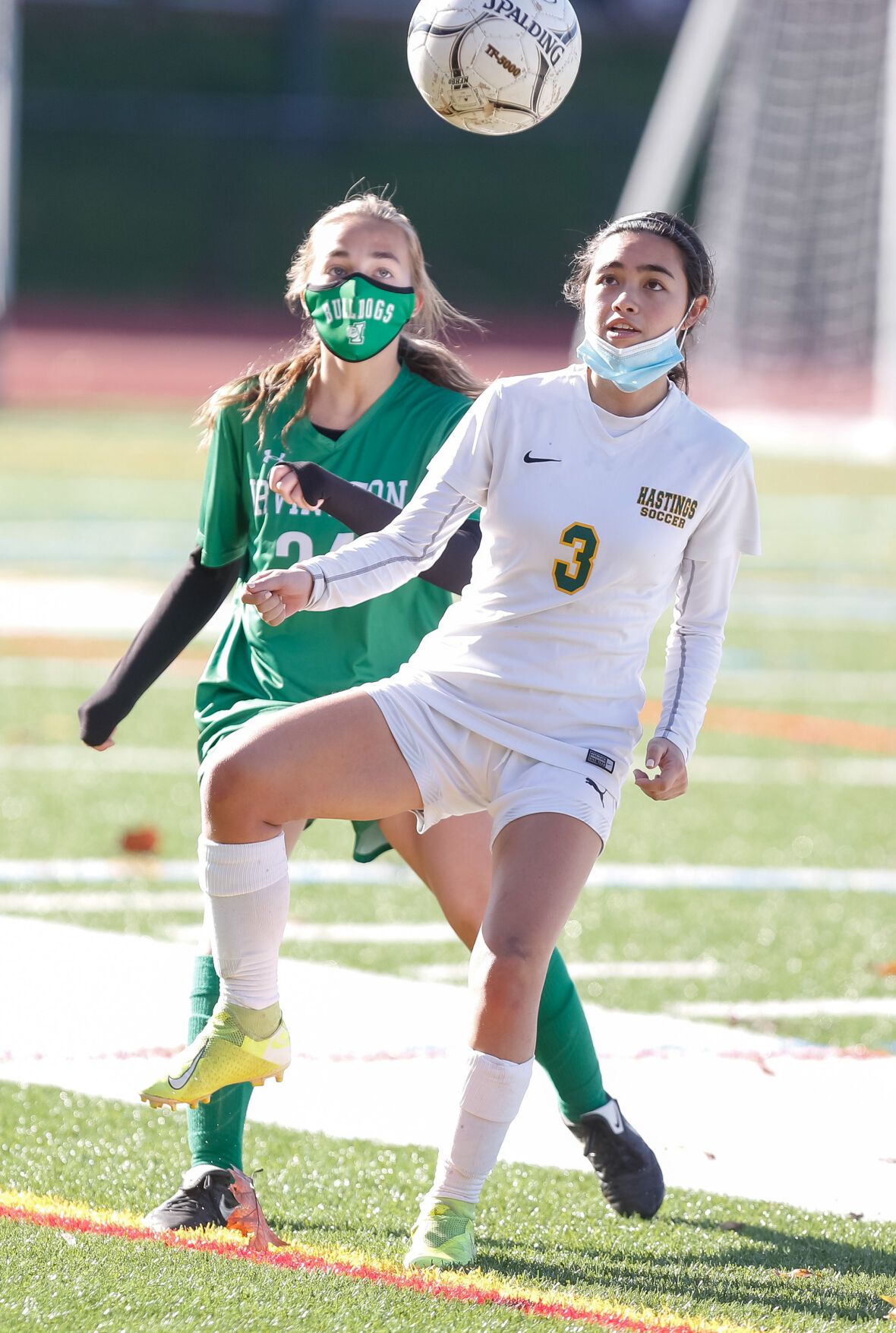 Hastings' Nia Platt tries to settle the ball while fending off Irvington's Amanda Berry on Nov. 14. 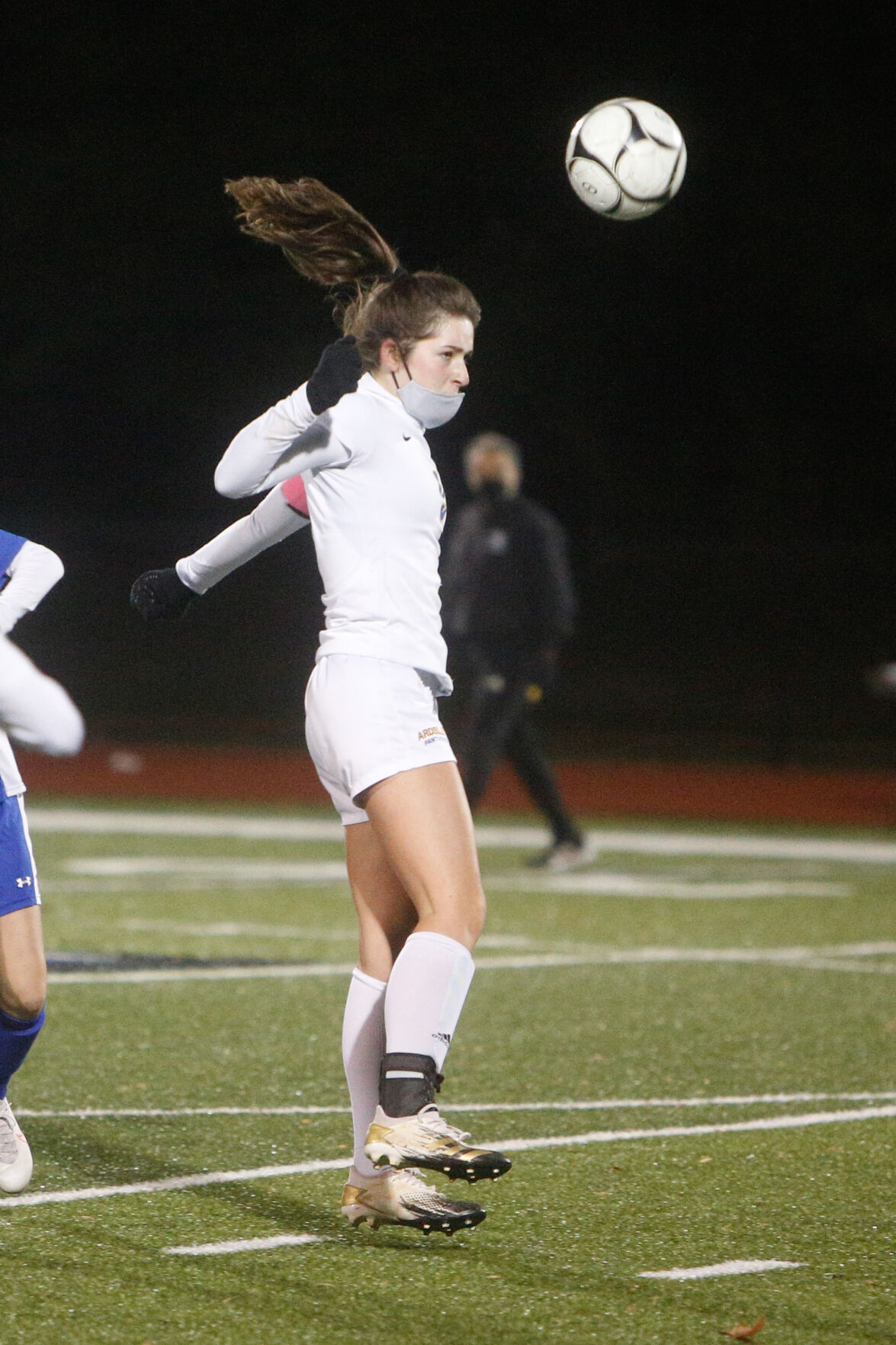 Ardsley's Emily Fitzsimmons heads the ball against Edgemont on Nov. 17. 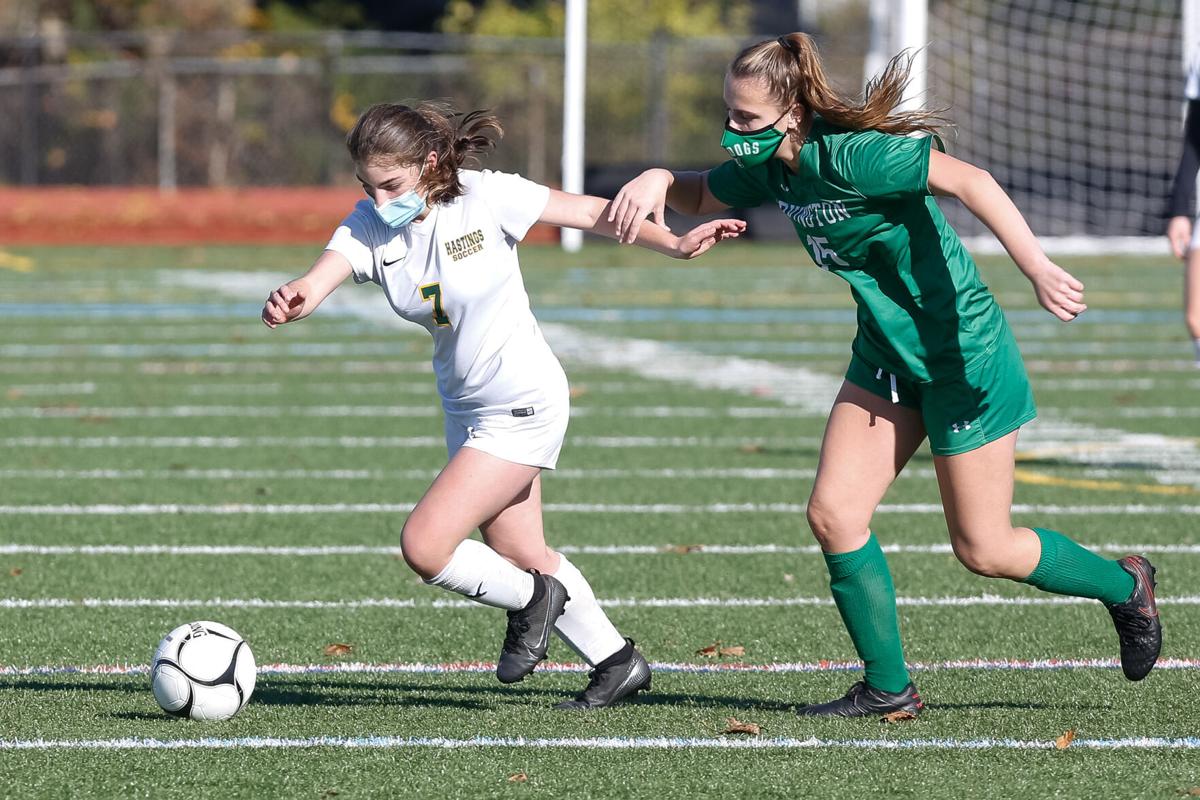 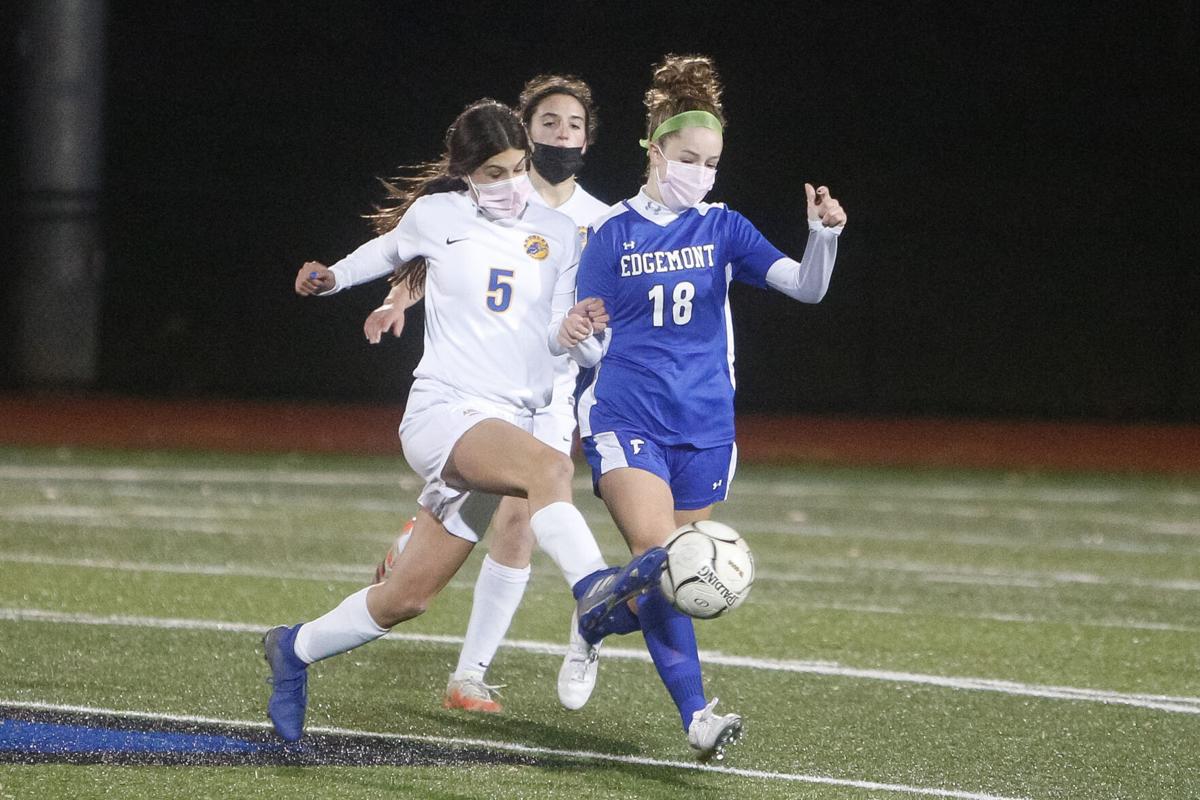 Ardsley's Christina Fatato vies for possession against Edgemont on Nov. 17.

Hastings' Nia Platt tries to settle the ball while fending off Irvington's Amanda Berry on Nov. 14.

Ardsley's Emily Fitzsimmons heads the ball against Edgemont on Nov. 17.

Ardsley's Christina Fatato vies for possession against Edgemont on Nov. 17.

In Southern Westchester tournament first-round action on Nov. 17, Ardsley advanced to the quarterfinals of the large schools’ bracket, while Dobbs Ferry joined Irvington in the quarters of the small schools’ division. Irvington, the fifth seed, received a first-round bye.

Hastings, the 10th seed in the small schools’ tourney, was the lone Rivertowns’ team to lose, suffering a 2-0 opening-round defeat at seventh-seeded Blind Brook.

ARDSLEY, the ninth seed in the large schools’ tournament, downed host eighth-seeded Edgemont, 1-0, on a goal midway through the first half by Sofia Finnerty. Emily Reece made eight saves for Ardsley. Ardsley was slated to tangle with top-seeded Scarsdale on the road yesterday (Nov. 19, after press time) in the quarterfinals.

On Nov. 13, Leah Rifas buried a 30-yard direct kick with 31:17 left in the second half for Ardsley, which battled Horace Greeley through a pair of scoreless 10-minute overtimes before settling for a 1-1 draw in Chappaqua.

Rifas’s kick was headed toward the upper right-hand corner of the cage when Quakers keeper Kaylin Genda leaped up and put a hand on it. However, she was unable to stop it from deflecting off her hand and into the cage.

Ramsey Edson had scored in the first half to give Greeley a 1-0 lead. Sydney Mikesell assisted on the tally.

Reece made 10 saves in goal for Ardsley, while Genda made five in the second half and overtime periods. In the first half, Ellie Handwerger made three stops for the Quakers.

The Panthers closed out the regular season the next day at home, dropping a 3-0 decision to visiting Horace Greeley.

Flora Glantz had two goals for the Quakers, while Hallie Rackoff added one tally. In the first half, Handwerger made five saves in goal for Greeley, while Genda made four saves in the second half.

“We let in a goal in the first half off a deflection, but being down 1-0 at the half was OK,” Larkin said. “We came out flat in the second half and gave up two goals in the first 5 minutes.”

He continued, “We had some chances to get on the scoreboard but could not find the net. Nicole Lawrence and Brooke Lonergan had great games out wide for us, but we did not take advantage of some great crosses they made.”

DOBBS FERRY, the sixth seed in the small schools’ division, defeated visiting 11th-seeded Valhalla, 2-0. Abby Ward and Kayla Halvorsen had the goals for the Eagles, who received three saves in goal from Julia Schwabe. Dobbs Ferry was scheduled to meet third-seeded Bronxville on the road on Nov. 19.

On Nov. 12, Dobbs Ferry fell to Bronxville, 6-0, at Springhurst Elementary School. Bronxville received two goals from Ashley Toal, a goal and two assists from Maeve Sullivan, a goal and an assist from Lily Jebejian, and goals from Alex Doukas and Molly Krestinski. Millie Koenig made five saves for the Broncos, while Schwabe made seven stops for Dobbs Ferry.

Blind Brook ended HASTINGS’ season on Nov. 17 as Jordyn Erenfryd tallied both of the Trojan goals. Blind Brook squared off with top-seeded Pleasantville in a quarterfinal on Nov. 19.

On Nov. 14, Hastings and host Irvington closed out their regular seasons with a 1-1 draw. Hastings’s Nia Platt and Irvington’s Sadie van der Spuy traded goals in the overtime.

“It was a back-and-forth game,” Irvington head coach Pat DiBenedetto said. “We found ourselves getting stuck on the attacking third with little to show on the shot board. Our defense played consistent, knocking out threats.”

Micaela Ross had an assist for Hastings.

“The girls finished the regular season with a really strong performance against a strong Irvington team,” Hastings head coach Kirk Bamford said. “All the players stepped up with a solid competitive performance. The game was a fantastic contest and will serve as a great preparation for the upcoming playoffs.”

On Nov. 13, Hastings traveled to Pelham and fell to the host Pelicans, 3-0, at Glover Field. Amelia Koff, Ellie Soderberg, and Katie Bratone scored for Pelham.