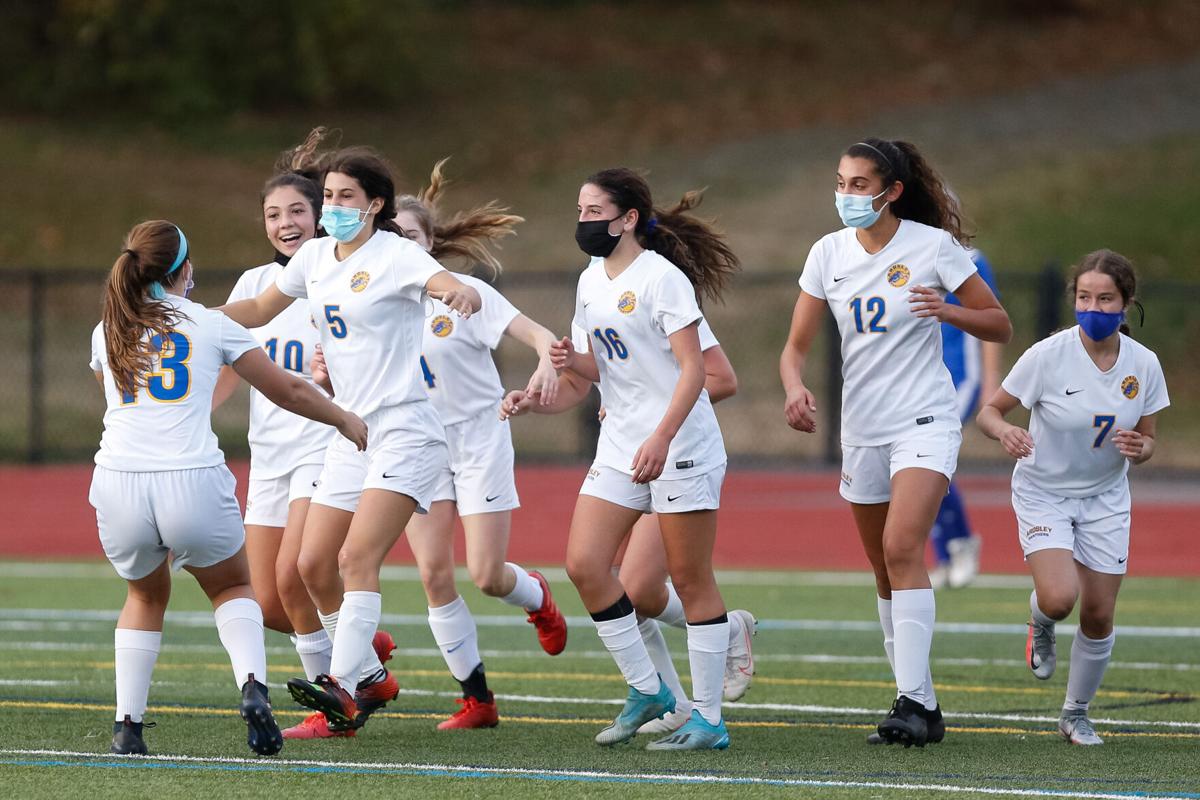 Christina Fatato of Ardsley celebrates her goal against Edgemont. 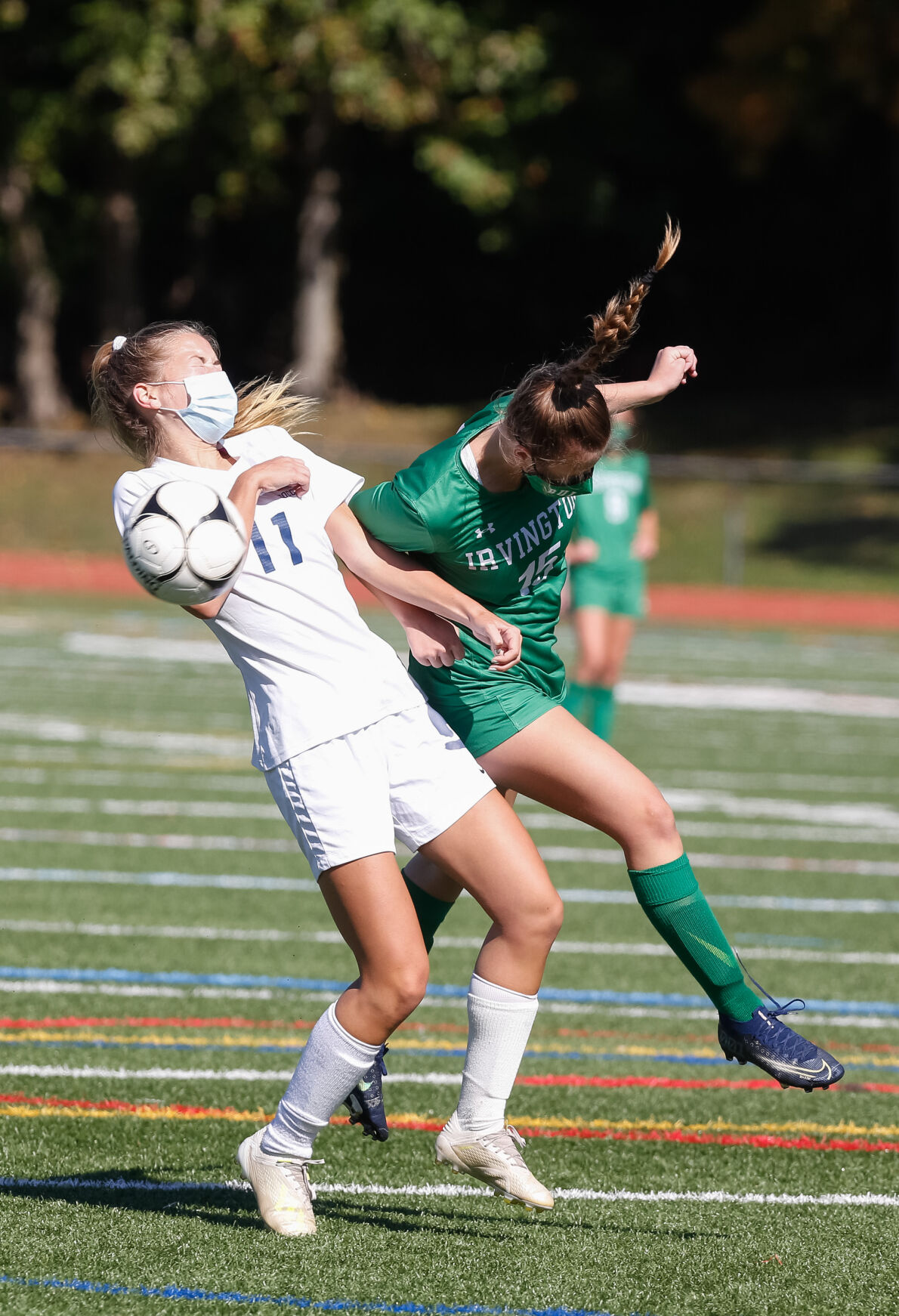 Claire Friedlander of Irvington heads the ball against Briarcliff. 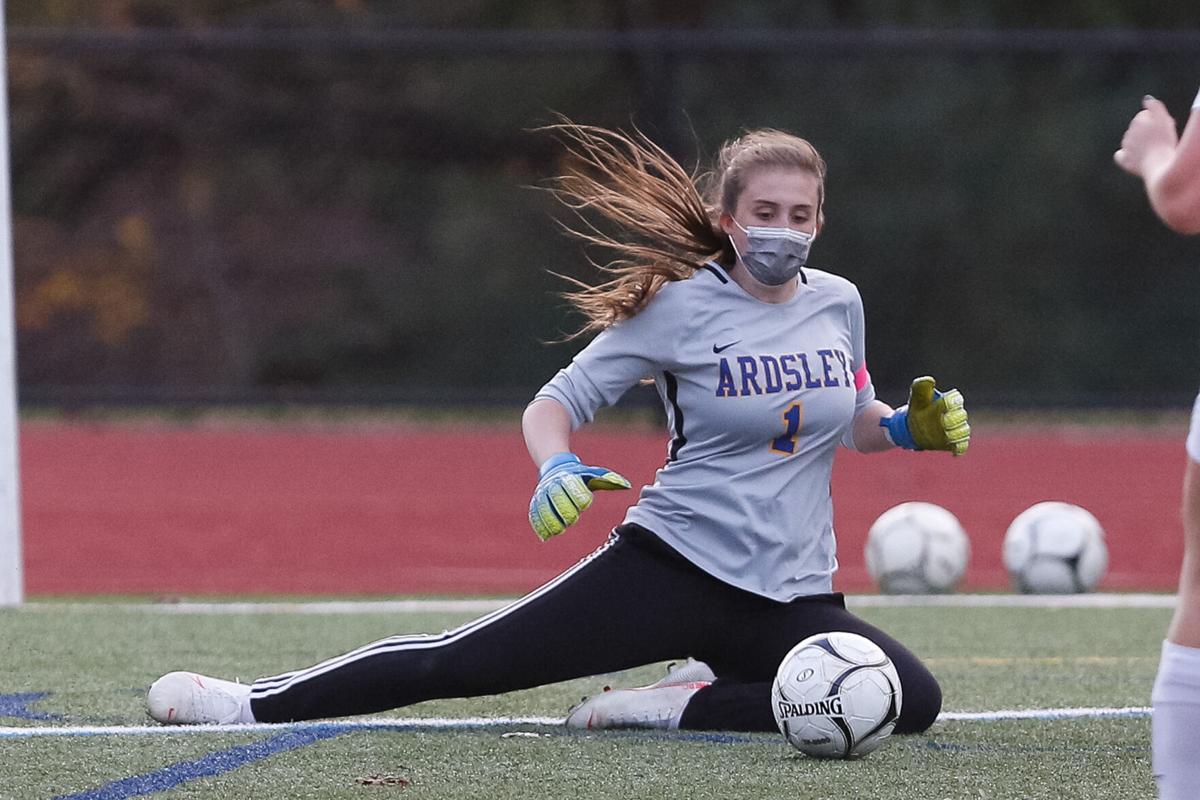 Emily Reece of Ardsley blocks the ball against Edgemont.

Christina Fatato of Ardsley celebrates her goal against Edgemont.

Claire Friedlander of Irvington heads the ball against Briarcliff.

Emily Reece of Ardsley blocks the ball against Edgemont.

Christina Fatato and Daniela Spiniello each scored goals while keeper Emily Reece recorded eight saves as visiting Ardsley played to a 2-2 draw at Edgemont on Oct. 19.

Alex Kahn and Daphne Ballas had the goals for Edgemont, while Izzy Boodell assisted on both tallies. In goal, Juliet Agoglia was credited with a dozen saves for Edgemont.

“We went up 1-0 on a goal by Christina just before halftime,” Ardsley head coach P.J. Larkin said. “They tied it 1-1 and then we went back up 2-1 on a goal by Daniela. She hit a half volley from 30-plus yards out to give us that lead with about 5 minutes left.”

Ballas knotted the game for Edgemont with 15 seconds remaining in regulation time.

DOBBS FERRY and HASTINGS matched up for a high-scoring affair that ended in a 4-4 draw at the Burke Estate on Oct. 15.

The host Yellow Jackets trailed 2-1 at the intermission, and then rallied for a tie after the break.

Erin Hogan scored twice for Dobbs Ferry, while Abby Ward and Kayla Halvorsen each tallied once. Anna Fernandez had two goals for Hastings, which also received one apiece from Raina Stevens and Micaela Ross.

Ward also had an assist for the Eagles, while Ava Nelson, Lois Heitler, and Tess Humphries each had a helper for the Yellow Jackets.

In goal, Julia Schwabe was credited with 10 saves for Dobbs Ferry, while Sabine Hinkaty turned aside a dozen shots for Hastings.

“A free-flowing game with both teams intent on attacking play,” Dobbs Ferry head coach Graham Smith said. “For this game, we changed our system of play to better suit our personnel, and though we had a few shaky periods on the defensive end, our ball movement and fast counter-attack style show tremendous promise.”

He continued, “After a dominant first half the score was only 2-1 in our favor, but we had already hit the post four times. Hastings adjusted well and controlled the first 20 minutes of the second-half scoring three times, but a further tweak brought back control of the game and we scored twice to tie the game in the last 15 minutes.”

Smith added, “I am especially proud of the late comeback, where the players raised their intensity level and focus. We have work to do defensively, but it is easily corrected. The offense now looks very dynamic.”

HASTINGS’ Anna Fernandez converted two penalty kicks while teammate Micaela Ross scored once to pace the host Yellow Jackets to a 3-2 victory over Westlake on Oct. 19. Sabine Hinkaty made five saves in goal  for Hastings.

“The game was a hard-fought contest where the girls did a great job at keeping themselves in the game and in front with their competitive edge,” Hastings head coach Kirk Bamford said.

Maeve Sheehan and Jennifer Straface had the goals for Westlake, which received eight saves in goal from Catherine Cavazzini.

IRVINGTON fell to visiting Briarcliff, 1-0, on Oct. 17. Ashleigh Fortunate had the lone goal.

He continued, “Despite the hard work of the seniors and their teammates, opportunities were left unfinished and as near misses. The result of the game was an incomplete picture of what could have been. We are progressing. Runs and shots are developing. I know good things are on the way.”

Bronxville 3, Dobbs Ferry 0 (Oct. 20): The host Broncos picked up a pair of goals by Lily Jebejian and one from Kiki Tormey. Millie Koenig had three saves in goal for Bronxville, while Julia Schwabe recorded four for Dobbs Ferry.