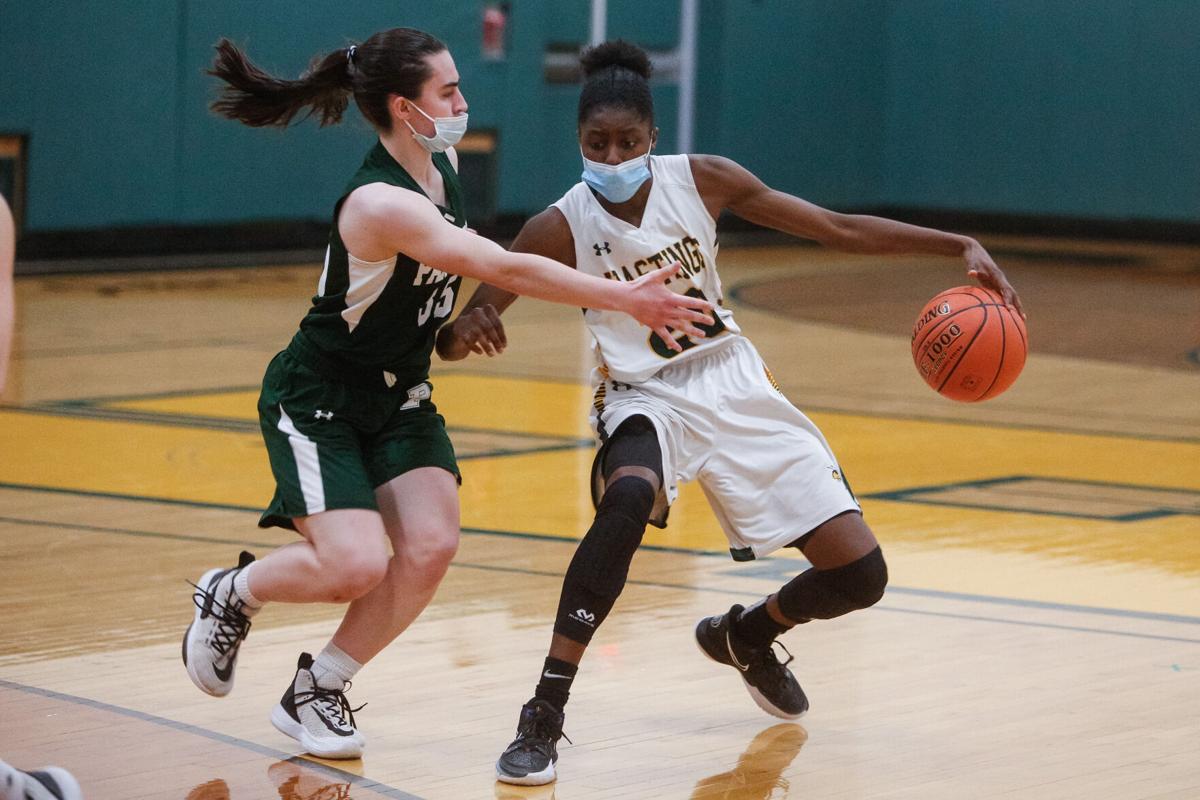 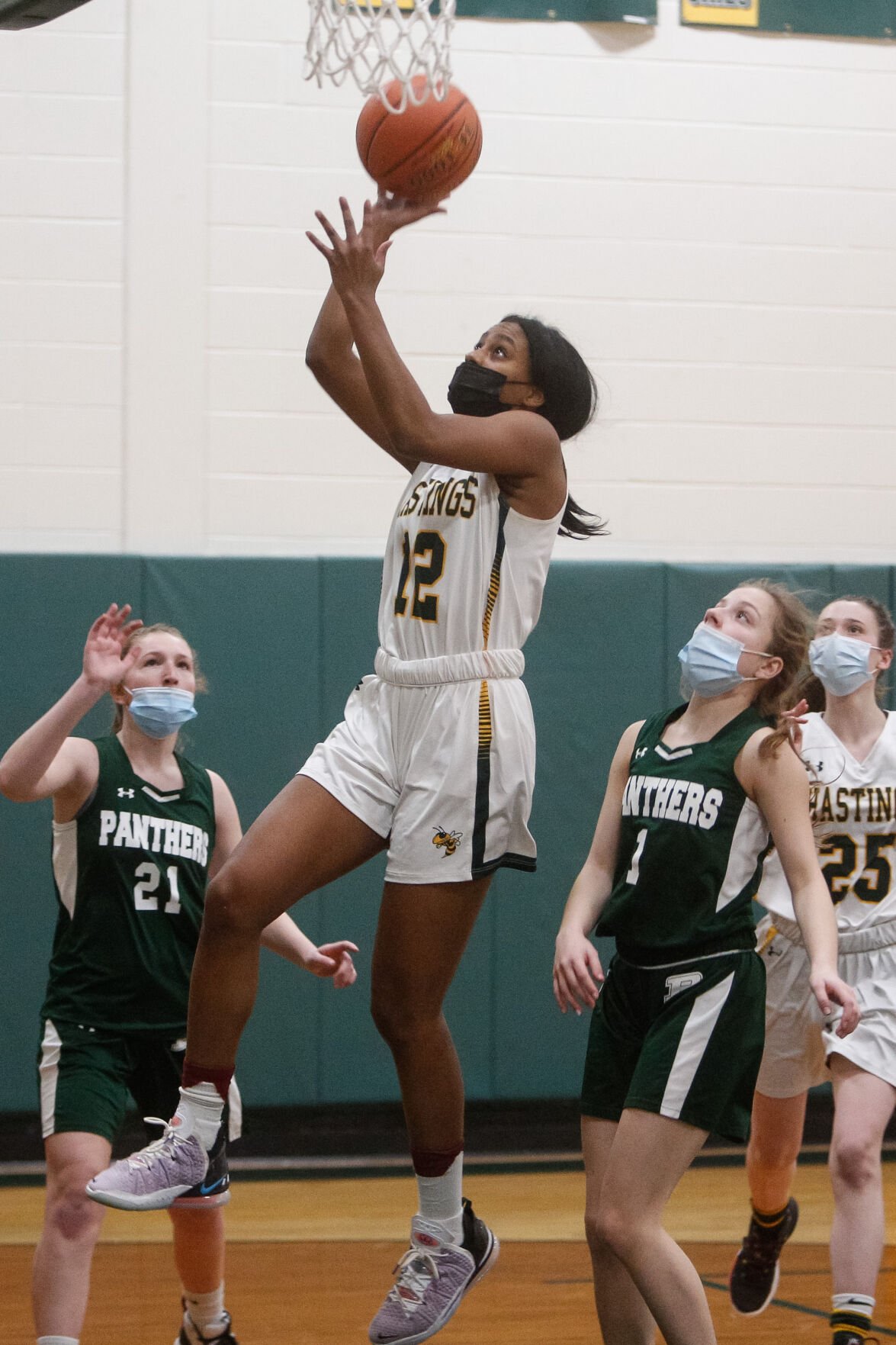 Hastings’ Paige Martin had 22 points and seven rebounds against Pleasantville. 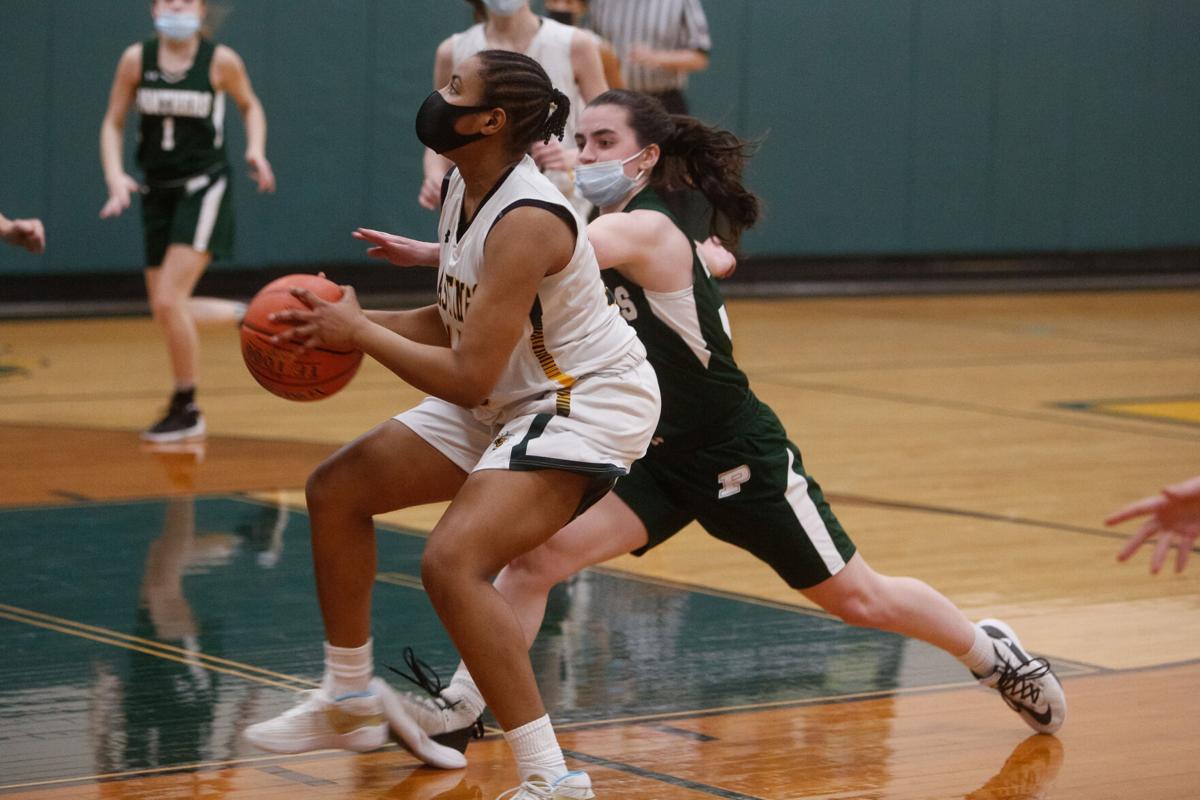 Hastings’ Violet Bowen-Rink had 10 points and four rebounds against Pleasantville. 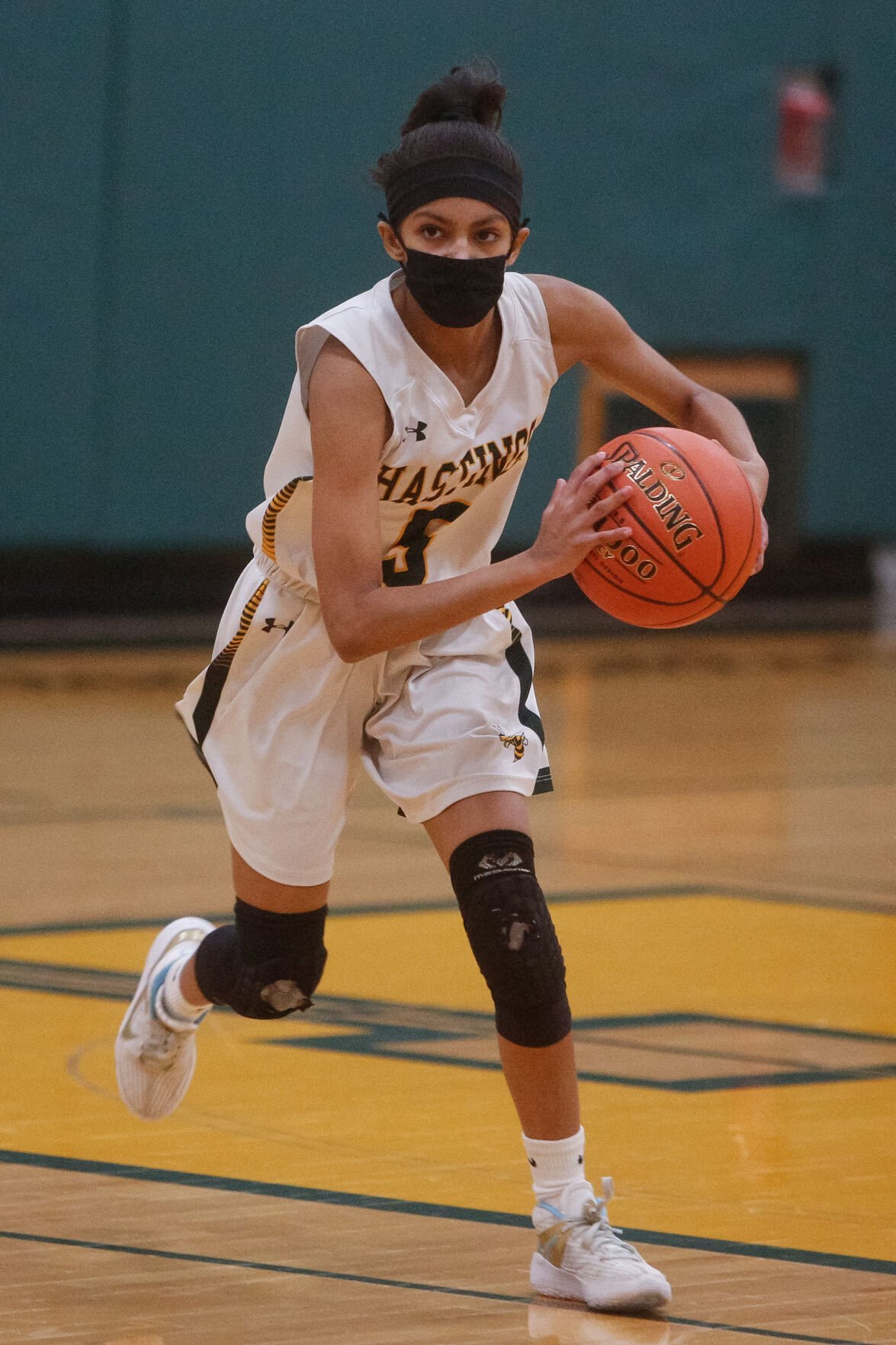 Hastings’ Paige Martin had 22 points and seven rebounds against Pleasantville.

Hastings’ Violet Bowen-Rink had 10 points and four rebounds against Pleasantville.

HASTINGS bolted out to a 17-point lead in the first quarter and staved off a late surge by second-seeded and visiting Pleasantville to post a 68-52 win in the Southern Westchester Group 3 championship game on March 13.

“The girls’ focus was to play together as long as we could,” Hastings first-year head coach Patrick Theodule said. “I told them if you want to be a great team, we need to have an identity [and] ours is defense. All season long that was the concentration — teams would have to deal with the pressure we bring.”

The top-seeded Yellow Jackets led 21-4 with 1 minute remaining in the first period after a Melannie Daley trey. At quarter’s end, Daley had 13 points and Hastings held a 21-6 edge. The Jackets extended their advantage to 36-16 at the intermission and led 51-34 heading into the final period.

Pleasantville pulled to within 60-48 with 2 minutes left to play. Hastings’ Lindsay Drozd then drained a long trey as the shot clock expired to increase the lead to 63-48 and end the Panthers’ hopes of a comeback.

After a Pleasantville hoop, Drozd converted an offensive rebound into a bucket before Daley scored in transition to increase the Jackets’ lead to 67-50.

The win ended Hastings’ season at 9-1.

Hastings advanced to the championship game with a 54-31 semifinal win over visiting fourth-seeded Bronxville on March 11.

By the midpoint of the first quarter, the Jackets led 9-2 on their way to a 30-11 advantage at the intermission.

Dobbs Ferry captured the Southern Westchester Group 4 championship on March 11 with a 76-45 rout of visiting and fourth-seeded Woodlands.

The third-seeded Eagles took command of the game with a second-quarter run. Trailing 18-17 after one period, Dobbs Ferry opened the second stanza with an 18-foot jumper from Erin Hogan, followed by a trey by Taylor Broccoli for a 22-18 lead.

Talia Reith then connected on a right-side jumper, which was followed by a Woodlands hoop for a 26-20 Eagles lead. In a span of 15 seconds, Julia Schwabe finished a strong inside move and Kayla Halvorsen converted a steal into a layup to extend that lead to 30-20. From there, the Eagles pulled away.

“After a slow start, we took control of the game,” Dobbs Ferry head coach Stephanie Mills said. “Kayla and Julia took over the game.”

At the break, Dobbs Ferry led 36-27. To start the second half, the Eagles held Woodlands scoreless for the opening 3:35, and tacked on nine points to increase their advantage to 45-30. By the end of the third quarter, Dobbs Ferry led 55-32.

Off the bench, Grace Healy had eight points for the Eagles (6-6), who won their final five games of the season and six of their last seven after starting the schedule with five successive losses.

On March 10, Dobbs Ferry dispatched host and second-seeded Blind Brook, 61-37, in a semifinal.

After a sluggish start, the Eagles took over the game with a 17-7 lead after one quarter and a 36-17 lead at the intermission. The Eagles’ advantage ballooned to 54-24 after three periods.

“We had a bit of a slow start, then picked it up,” Mills said. “We controlled the game the rest of the way. Julia and Kayla took over and we did a great job on the defensive boards.”

Schwabe had 23 points and pulled down 17 rebounds, while Halvorsen added 21 points and dished out six assists. Broccoli chipped in with seven points.

In a Southern Westchester Group 2 quarterfinal on March 10, third-seeded and host ARDSLEY could not overcome the Pelham defense — or their own poor shooting — and fell to the sixth-seeded Pelicans, 44-32.

After Leah Rifas tied the game at 12-12 for Ardsley in the second quarter, Pelham scored the next four points to take a 16-12 lead and never looked back. The Pelicans led 27-21 at the break and 36-24 heading into the final period.

“Credit to Pelham, they came out and took the win,” Ardsley head coach Nick Resavy said. “We struggled offensively and at times on the defensive end as well. That starts with me, and we’ll be ready to go next season.”

He added, “We took a step forward this year, winning the league for the first time since 2015, and that’s something our team should be proud of. I know they are hungry to win the section next year, and I’m excited about it.”

IRVINGTON’s season ended with a last-second 53-51 loss at second-seeded Pleasantville in a Southern Westchester Group 3 semifinal on March 11. Though the third-seeded Bulldogs led most of the way, they were unable to shake the Panthers.

A pair of Grace Thybulle free throws with 19 seconds remaining in the fourth quarter forged a 51-51 tie for the Bulldogs.

Pleasantville, after a pair of timeouts, appeared on their way to running out of time when Jenna McAllister was fouled on a desperation 15-foot, off-balance jumper with 1 second on the clock. McAllister then sank both of her foul shots for the Panthers’ two-point lead.

After a timeout to advance the ball to the front court, Irvington’s last gasp was a 25-footer from Thybulle that missed its mark.

“Very tough way to end,” Irvington head coach Gina Maher said. “Pleasantville was a very scrappy team and played hard — they have been playing together since fourth grade and work very well as a team. It was a good game that played out until the last second. I am proud of how hard my girls played.”

Irvington led 15-13 after one quarter and held a 29-20 advantage at the intermission. However, the Bulldogs were sloppy on offense, leaving the door open for the Panthers, who cut the Irvington lead to 39-37 after three periods.

With 5:15 remaining, Pleasantville led 43-41 before Aine Cleary tied it for Irvington with a right-side jumper. A Julia O’Reilly trey gave the home team a 46-43 advantage, but the Bulldogs responded with a pair of Thybulle free throws and a Katie LeBuhn put-back to grab a 47-46 lead with 2:38 to play.

The Panthers answered with a five-point run to take a 51-47 lead with a little more than a minute to play. Cleary’s jumper cut that lead to 51-49 with 50 seconds left.

It was the final Irvington game for seniors Thybulle, Cleary, and Kate Hanna. Thybulle paced Irvington with 22 points, while LeBuhn added 17.

“It is going to be hard saying goodbye to all my seniors,” Maher said. “Grace, Aine Cleary, and Kate Hanna have grown into exceptional leaders and have all given incredible effort and time to our program. They have shown the younger players what it means to ‘Hold the Rope.’”

The coach added, “We are a family and it is always with mixed feelings that we send our children off to college. We will miss them, but know they are headed to new and wonderful adventures and will hopefully always come back home.”