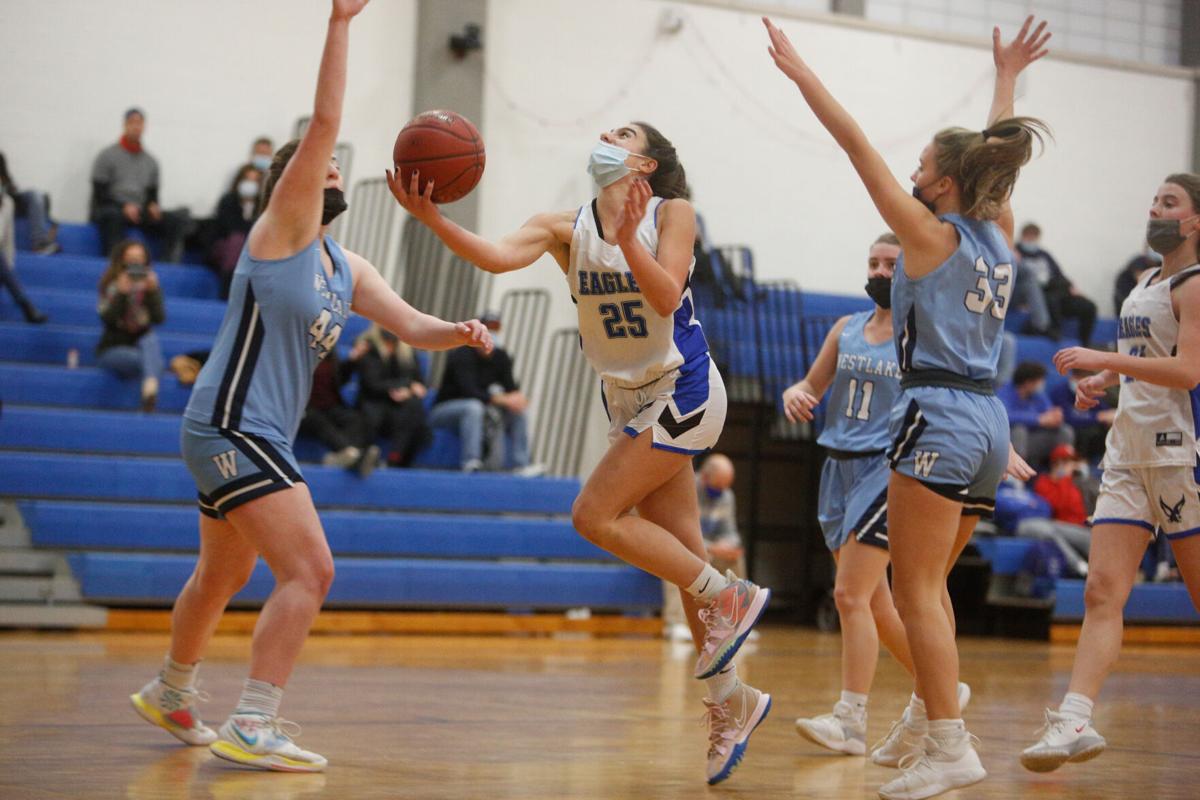 Dobbs Ferry’s Talia Reith puts up a shot against Westlake. 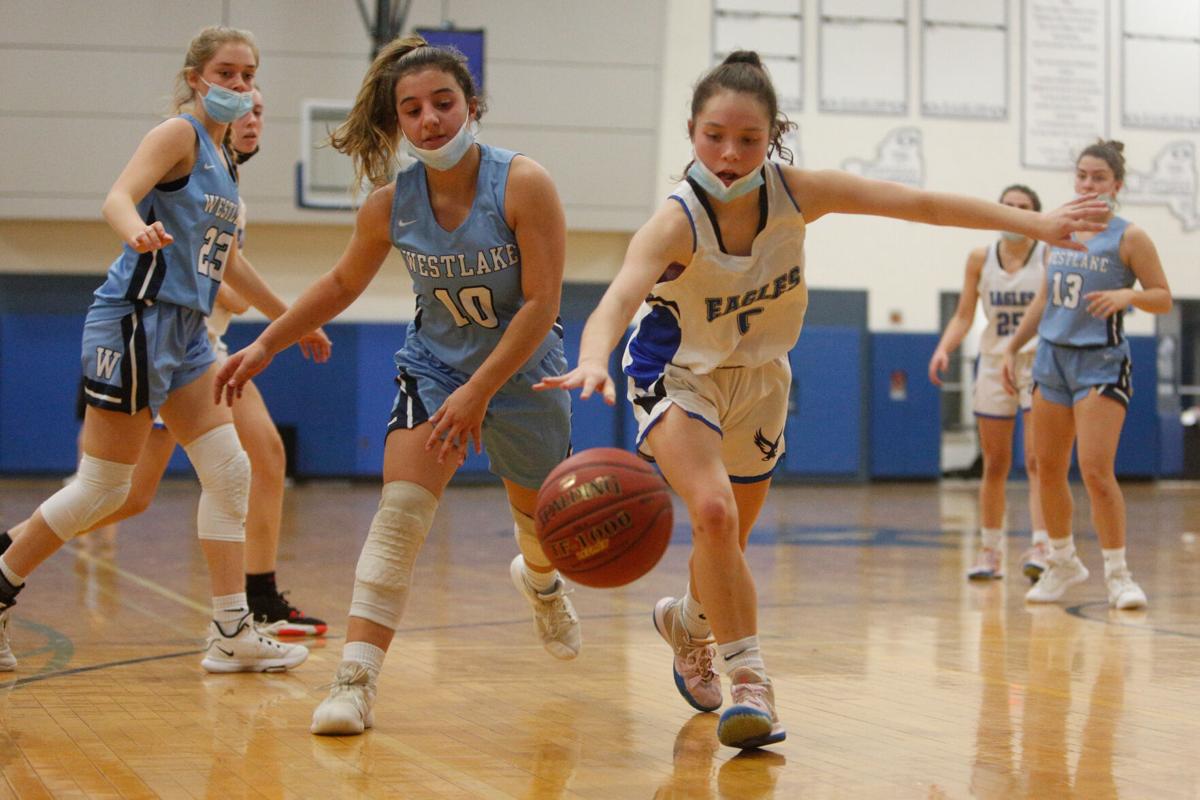 Dobbs Ferry’s Taylor Broccoli vies for the ball against Westlake

Dobbs Ferry’s Talia Reith puts up a shot against Westlake.

Dobbs Ferry’s Taylor Broccoli vies for the ball against Westlake

Heading into the locker room at halftime on Dec. 20 at home against Westlake, Dobbs Ferry varsity coach Kasey Grisanti felt pretty good about the way her Eagles were playing.

After trailing by as many as nine points in the first quarter, Dobbs Ferry had rallied back in the second quarter to tie it up and only trailed by two at the half, 29-27.

Despite the momentum shift and the home crowd cheering them on, that was as close as the Eagles would get. It was Westlake with the hot hand in the third quarter as the Wildcats opened up a 17-point lead and finished it off for a 54-45 victory over the Eagles.

“We came out really strong in the first half and we just fell asleep in the third quarter — that quarter killed us,” Dobbs Ferry coach Kasey Grisanti said. “We came out aggressively and played hard [in the first half]. I don’t know what happened in that third quarter. Westlake is a good team and we just didn’t get out to their shooters. They were hitting shots, and we weren’t. We woke back up in the fourth, but it wasn’t enough.”

Dobbs Ferry fell behind by nine points in the first quarter, trailing 16-7. But the Eagles scored five of the last eight points to cut the lead down to 19-12 at the end of the quarter.

The Eagles carried the momentum over into the second quarter as Talia Reith hit a pair of three-pointers, and Taylor Broccoli also connected from downtown. Jacqueline O’Connor then scored to tie it up at 27-27 before Westlake was able to score the last points of the half.

Any thoughts of victory were dashed in the third quarter as Westlake turned the momentum around. The Wildcats went on a 15-1 run to open up a 47-30 lead and never looked back. Allie Castellone led the way for the Wildcats, as she led all scorers with 20 points while teammate ToniAnn Mastracchio added 14.

Dobbs Ferry rallied back once again as the Eagles cut the lead to seven points, but Westlake held on for the win.

“That is one thing about this team — they never give up,” Grisanti said. “They may have spurts where they go quiet, but they don’t give up until the end. They keep fighting to the last second.”

“Those three are our biggest threats offensively and we need them to be on for the whole game,” Grisanti said of O’Connor, Reith, and Broccoli. “They all know their roles now and they need to step up to fill them. They have it in them and I know they want it and it will come.”

With the loss Dobbs Ferry fell to 2-5 overall on the season as the Eagles head into the holiday break before returning to action on the road on Dec. 29 at Brewster.

“We’re struggling, we’ve got some things to work on over the break. But I think when we come back we’re going to put it together,” Grisanti said. “Once we get there, we’re going to be a tough team.”

Dobbs Ferry also competed in the Pearl River Tournament over the weekend as the Eagles took on Suffern in the consolation game on Dec. 18 and suffered a 48-36 setback. O’Connor (14 points, seven steals) and Broccoli (eight points, six steals) led the Eagles. Broccoli was named to the all-tournament team.

In the first round of the tournament Dobbs Ferry suffered a 46-37 loss to Clarkstown South. Kayla Albert and Broccoli totaled 14 and 13 points, respectively.

Hastings continued to roll as the Yellow Jackets defeated a pair of large schools to win the 41st annual Rich Korn Tournament at North Rockland.

With the two wins Hastings remained undefeated as the Yellow Jackets are off to a 5-0 start on the season.

In the championship game on Saturday, Dec. 18, Hastings had to take on the hosts from North Rockland, one of the largest Class AA schools in Section 1. It was Violet Bowen-Rink with the hot hand for Hastings as she scored 23 points to lead the Yellow Jackets to a 53-45 victory.

Katie Drozd also had a big game as she finished with 16 points, while Paige Martin was in double figures with 10 points. Jillian Pena added four points.

The first-round game was a nail-biter before Hastings prevailed with a 49-44 overtime victory over Monroe-Woodbury, a large Class AA school from Section 9.

Martin led the way for the Yellow Jackets with 16 points, while Drozd also had another big game with 15 points. Luisa Scioscia and Alexa Magaro had six points apiece. Bowen-Rink added five points.

Irvington had one game last week as the Bulldogs traveled to Westlake on Thursday, Dec. 16, and came home with a 42-30 victory.

Anders Knapp was the leading scorer for Irvington, finishing with 12 points, and Alyson Raimondo was also in double figures for the Bulldogs with 10 points. Katie Lebuhn had a big game off the boards as she pulled in 13 rebounds, and Claire Friedlander was also strong on the boards as she finished with 10 rebounds.

Ardsley went on the road and endured its first loss, a 61-49 defeat at the hands of Tappan Zee on Wednesday, Dec. 15.