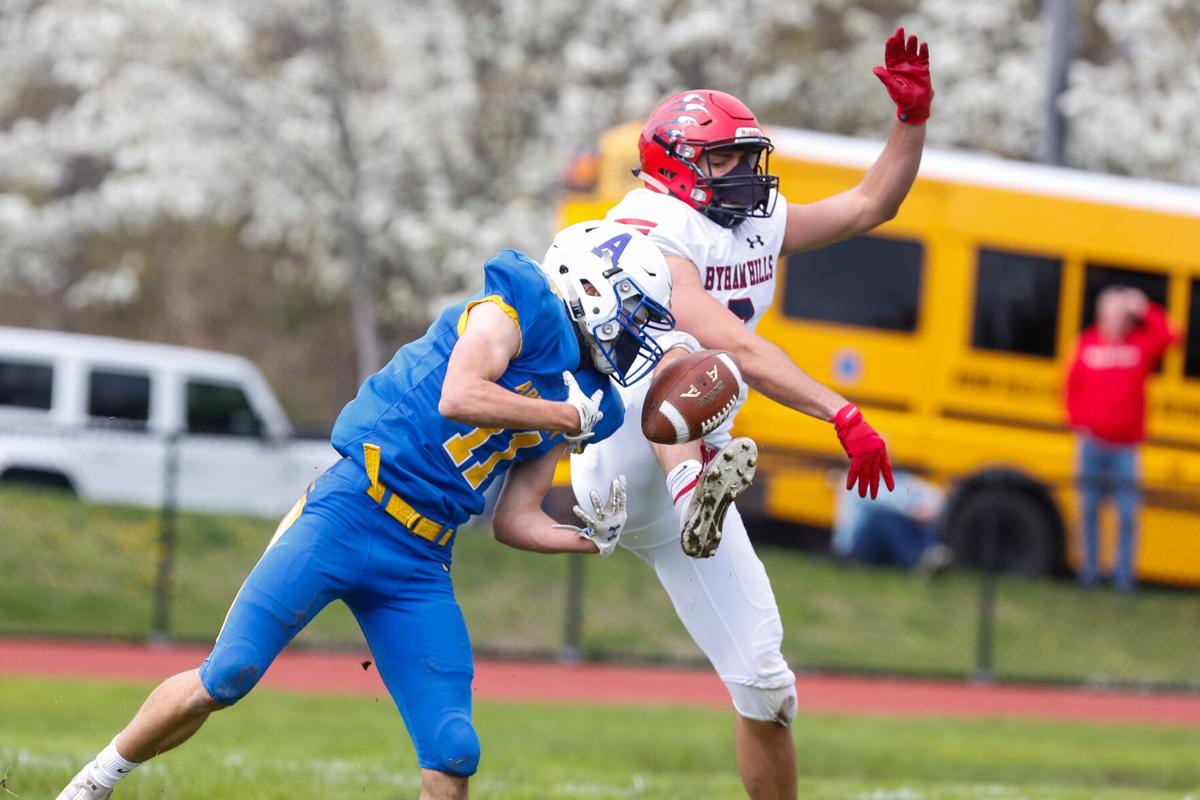 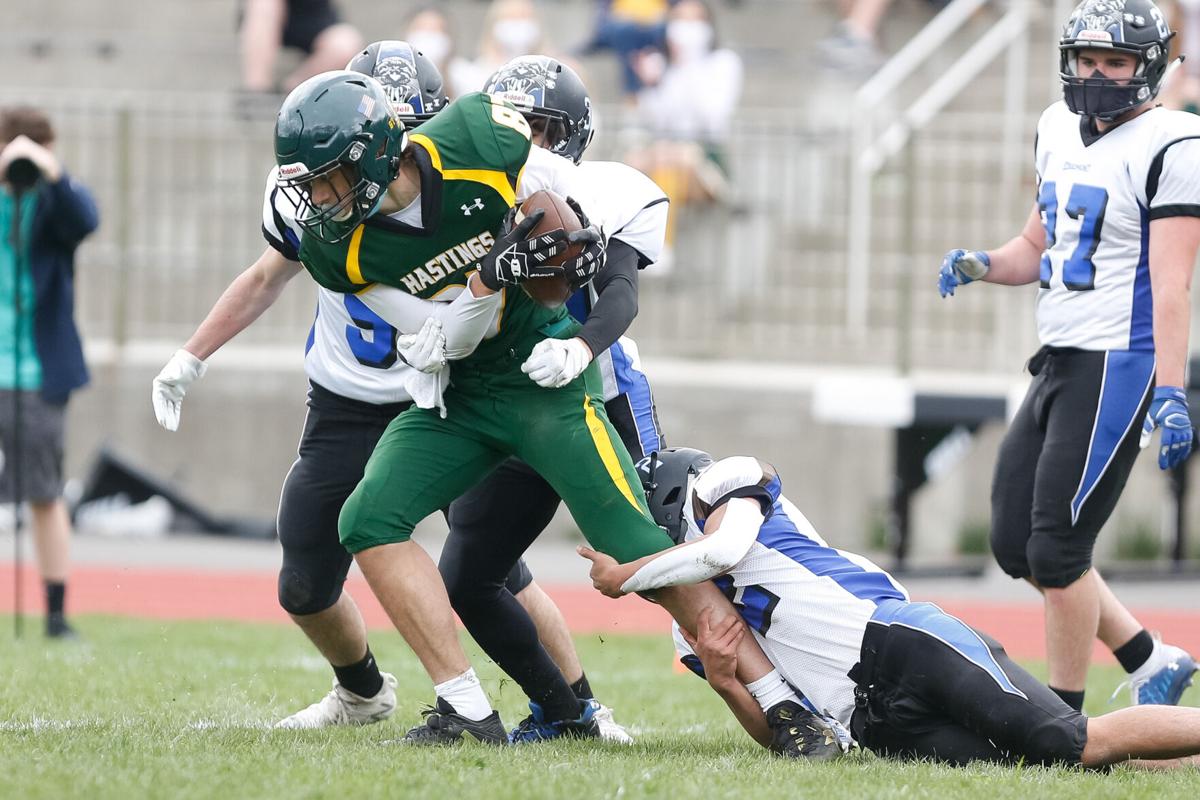 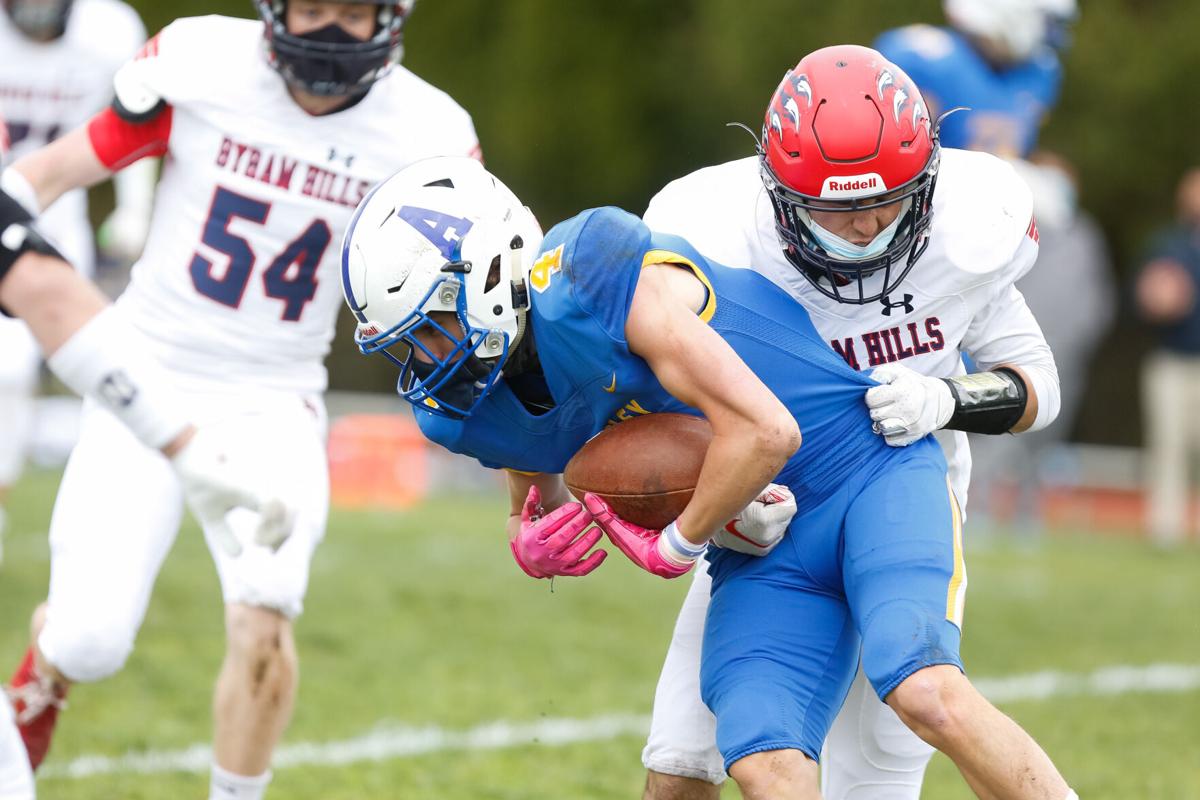 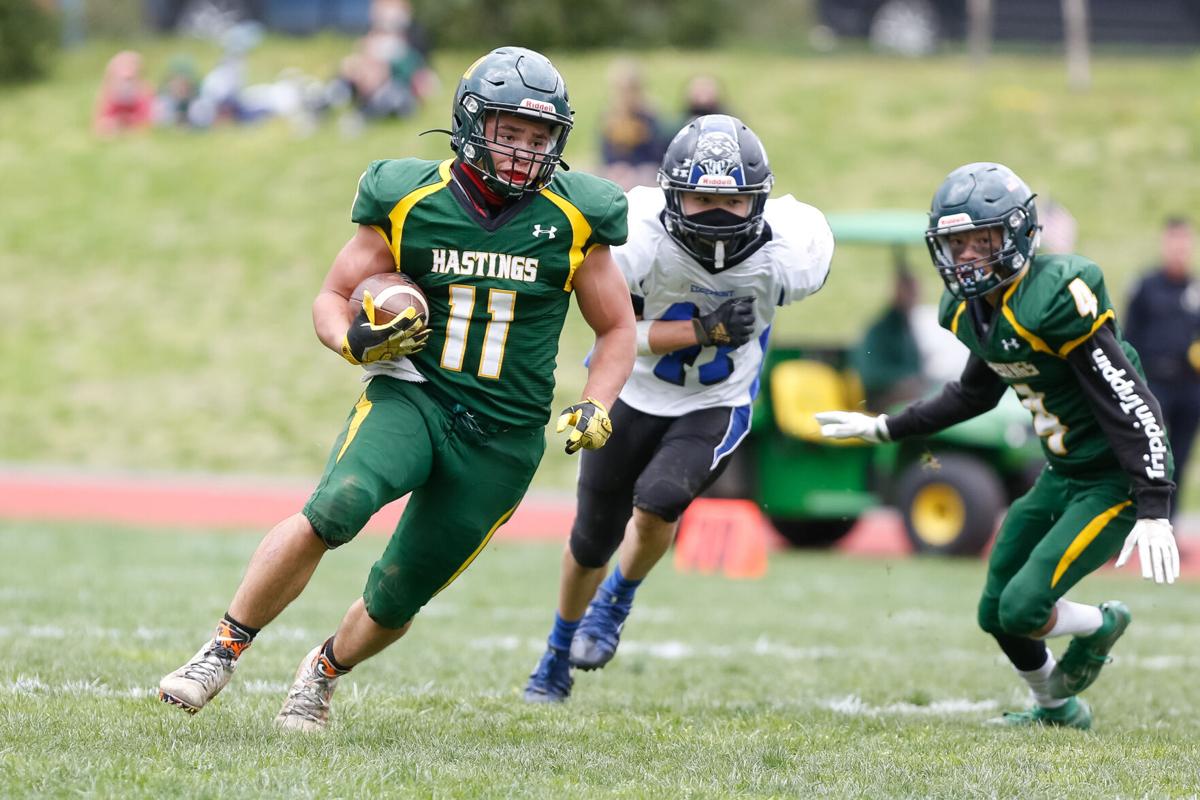 Despite 242 yards of passing from quarterback Michael Belarge, the host Ardsley Panthers closed out the regular season with a 21-7 loss to Byram Hills on April 17 in a rematch of the 2019 Section I/Class B championship game.

The victory kept Byram Hills, who returned a majority of the starters from that 2019 title game, unbeaten in five outings this spring and vaulted them into the Class B championship game against Westlake, who the Bobcats defeated 26-7 earlier this season.

“They [Byram Hills] have some really great athletes, a lot of great athletes at just about every position, and they are well coached,” Ardsley head coach Dan DiFalco said. “I think we, personally, took ourselves out of this game with the mistakes we made in the first half.”

He continued, “We kept giving them a short field to work with because of the mistakes — way too many mistakes to overcome. This loss was not from a lack of effort or a lack of fight. I am really proud of the way guys stepped up today.”

Ardsley, which graduated many of its key players from the 2019 sectional title squad, fell to 3-2 on the season.

“We want to win every game, and losses are not easy to stomach, but at the end of the day we were excited to get out there and compete against a great team like Byram Hills,” DiFalco said. “We are happy that our seniors got the chance to get out there and play this spring season.”

The coach continued, “Next year, we will be returning most of our guys with just a few exceptions. It was great for Michael [Belarge] because he needed the work and, in a game like this, you can’t replicate it and get the type of experience he picked up today. I was really excited to see him and the other guys step it up against a really good team.”

Junior wideout Connor Jones made eight catches for 154 yards. With Belarge also a junior, Ardsley appears set in the passing game for next season, which will be this fall.

Ardsley had trouble containing Byram Hills’ quarterback Hayden Fruhling and running back Matt Weiler, who combined for 291 of the Bobcats’ 314 yards rushing. Weiler had 163 yards on 25 carries, while Fruhling added 128 yards on 25 attempts. Fruhling rushed for two scores and added a 42-yard TD pass to Ryan Abatemarco.

The first quarter was a rollercoaster ride for Ardsley.

A three-and-out from the Panthers offense was followed by Byram Hills marching from their own 33 to the Ardsley 3, where the home team defense stiffened, pushing the Bobcats back to the 8 and forcing a turnover on downs.

Ardsley, however, could not gain a first down and was forced to punt from deep in their own end of the field. Punter Matt Levy then kicked the ball into the back of one of his blockers, and the ball settled at the Panthers’ 14.

Four plays later, Fruhling pushed into the end zone from a yard out for a 7-0 Bobcats lead with 2:20 left in the first quarter.

The remainder of the opening half was controlled by Byram Hills, though Ardsley made enough plays on defense to keep the game close.

“In the first half, we just made too many mistakes,” DiFalco said. “We took a roughing-the-passer penalty, ran into the kicker, kicked the ball into the back of or own player.”

Unable to run the ball consistently, the Panthers offense was bottled up most of the day. In the first half, Ardsley netted 1 yard rushing on 10 tries. Through the air, Belarge was forced to throw 18 times, completing 10 for 68 yards. Belarge was an identical 10-of-18 passing in the second half, but for 174 yards. For the game, Belarge was 20-of-36.

Byram Hills extended their lead to 14-0 just 1:15 into the second period. On a third-and-14 play from the Ardsley 42, Fruhling found Abatemarco down the right seam for the score.

The score remained 14-0 until the opening drive of the third quarter when the Bobcats went 65 yards in 10 plays, taking 6:30 off the clock, moving ahead 21-0 on a 2-yard run by Fruhling.

Ardsley’s offense came to life after that, riding the right arm of Belarge, who went 4-for-4 for 67 yards on an 80-yard, seven-play drive that was capped by a 39-yard scoring strike to Jones with 2:50 to go in the third quarter.

The Panthers drove down to the Bobcats’ 39 on their next possession, only to turn the ball over on downs.

Not giving up, Ardsley blocked a 26-yard field goal attempt by Byram Hills’ David Gold late in the fourth quarter. The Panthers then drove down to the Bobcats’ 20 as time was running down. A last-ditch pass into the end zone by Belarge was intercepted to end the day.

Ardsley gained only 23 yards on the ground on 17 tries, topped by 27 yards on three carries by James Lebberes, who was forced to the sidelines early in the second half with a leg injury. Lebberes also had three receptions for 18 yards.

Tucker Peterson had five grabs for 43 yards for Ardsley, while Ryan Watson tacked on four catches for 27 yards.

McGovern had TD runs of 70 and 25 yards and returned a kickoff 60 yards for a score. He finished the day with 178 yards on 11 carries.

“It was a great team win,” Dobbs Ferry head coach Joe Cox said. “I thought we had our best week of practice this season.”

He continued, “We really played well in all three phases. We've stressed putting together a complete 48 minutes and I thought we did.”

Harry Dann added two touchdowns for the Eagles on runs of 5 and 28 yards, while Jabari Marsland also found the end zone for a rushing TD. Harry Dann finished the day with 162 yards rushing on 11 carries, while Brian Dann added 64 yards on the ground on 10 tries.

The win improved Dobbs Ferry to 3-2.

Briarcliff is the top team in our league,” Irvington head coach Steve Yurek said. “We knew we would have to play extremely well and force turnovers. Hamilton held on to the ball.”

He continued, “Our players have played their hearts out all season. We have had three quarterbacks and five centers play this season and, with little prep time, it’s amazing how this group of players have stayed in games.”

The loss left Irvington at 1-3 on the season.

Edgemont received a 95-yard interception return for a touchdown by Will Shah, who also booted a 37-yard field goal, and a TD pass from Milan Gilleonardo to Davis Kim to escape with the win at Reynolds Field.

“The loss was tough, especially being at home, but the kids played hard,” Hastings head coach Sammy O’Hare said. “They did not quit and we're looking forward to playing Edgemont again in what hopes to be another highly competitive football game.”

Hastings is set to visit Edgemont on April 24 to close out the season.

Kennedy also led Hastings in rushing with 40 yards, while Reign Peterson had 30 yards and Kyle Honecker 21 yards. Capuano led all Jackets receivers with 61 yards, while Chris Rotiroti had 46 yards, one more than Prahl.

The loss left Hastings at 3-2 on the season.