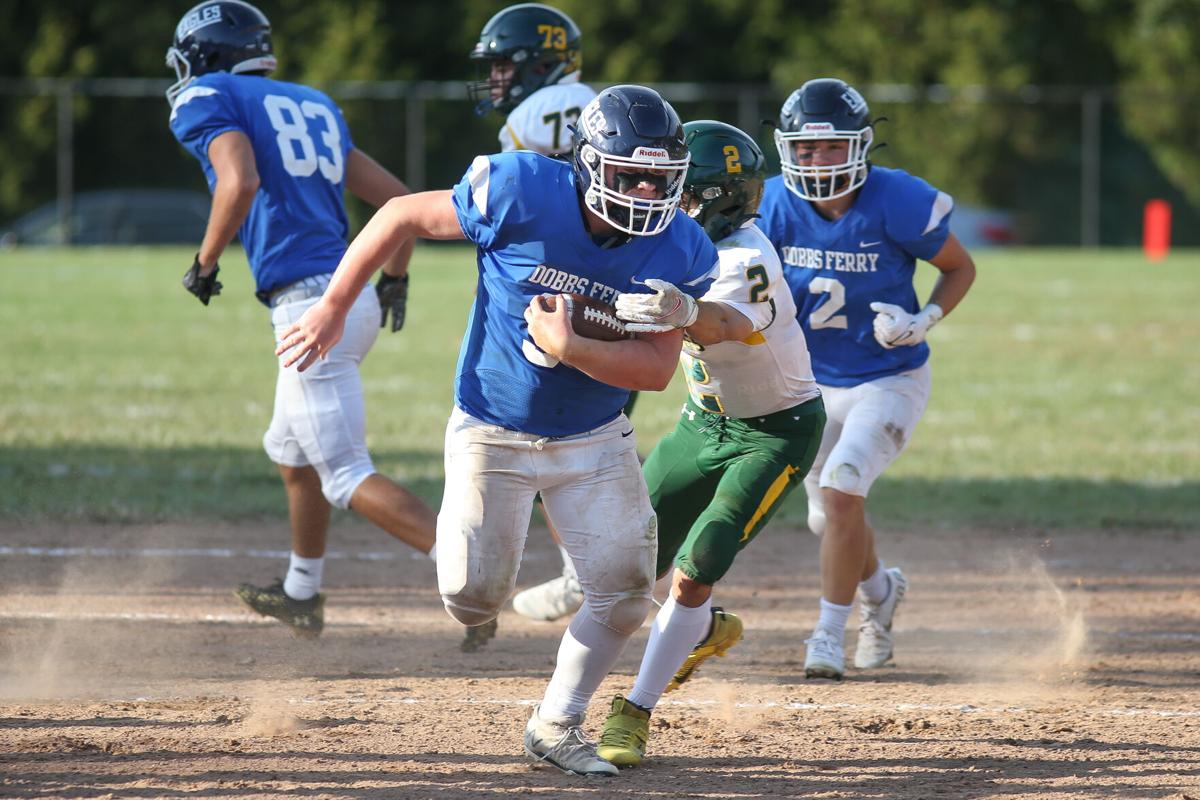 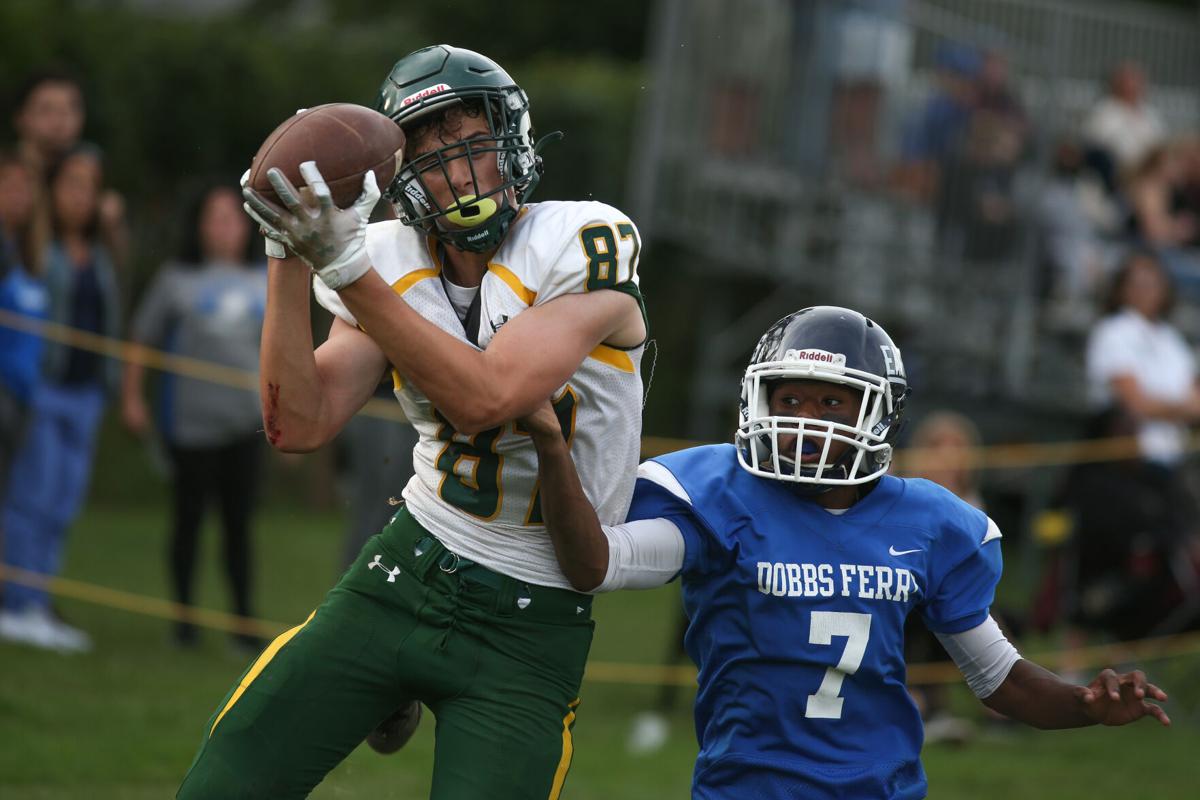 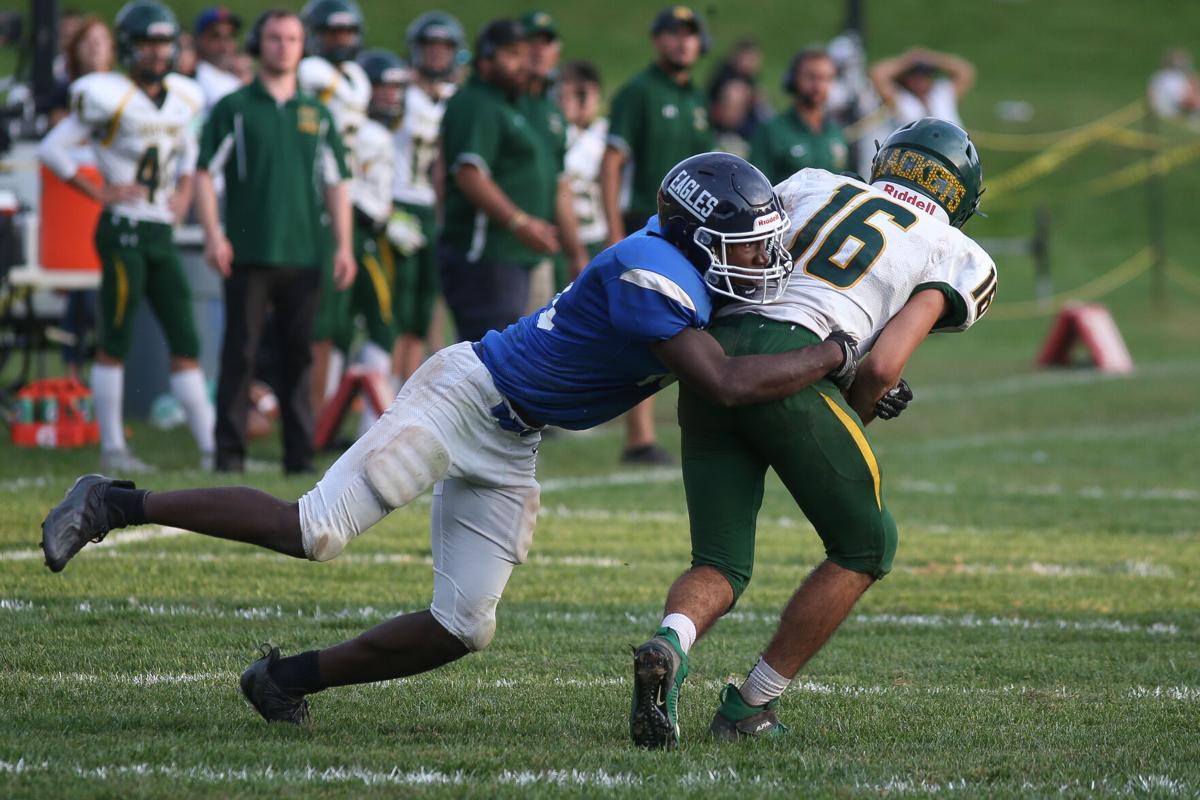 Dobbs Ferry’s announcer called last Friday, Sept. 24, “the night the lights went out.” With 56 seconds remaining in the first quarter and the host Eagles leading 6-0 over rival Hastings, the game was suspended due to multiple portable lights failing at Gould Park.

Almost 70 hours later, on Sept. 27, the Eagles and Yellow Jackets resumed play during the afternoon and Dobbs pulled away for a 35-12 victory.

“It was definitely a little bit of adversity on Friday night,” Eagles coach Joe Cox said after Monday’s victory. “It was just kind of out of everybody’s control and a crazy situation that would probably never happen again. But I thought [the team] handled it well and we kind of tried to clean things up between then and today. We made some adjustments.”

“I think he’s just a product of his work ethic, what he did in the offseason and how much he loves the game,” Cox said of Dann. “I think he runs it like a Dobbs Ferry fullback. He loves the role and he’s the right guy for it.”

Opposing defenses can’t just key in on stopping Dann because the Eagles have other athletes who can hurt them.

Holman gave the Eagles the early 6-0 lead last Friday night with a 25-yard touchdown run with 4:09 left in the first quarter.

Two Jabari Marsland sacks forced Hastings to punt on its next possession, but that’s when the lights went out and the game was put on pause. When the game picked up again on Monday, Hastings punted and the Eagles put together a methodical drive capped off by a Dann 1-yard touchdown with 9:54 left in the first quarter. Sanzo’s two-point conversion run gave them a 14-0 lead.

The Yellow Jackets fumbled on their next possession and Sanzo recovered at Hastings’ 33. A few plays later, Holman found the end zone again on a 7-yard run around the left edge. Jhonatan Almaras’ kick made it 21-0 with 7:08 left in the first half.

“I think we definitely came out ready to roll and finished the start of that second quarter the right way,” Cox said. “We got the score to a good place at that point.”

Hastings came out of halftime with some gusto and put together a lengthy drive aided by a few Eagles penalties. Junior Robert Kennedy found sophomore Keith Capuano on a 32-yard touchdown pass in the right corner of the end zone to get the Yellow Jackets on the board and cut the deficit to 21-6 with 9:57 left in the game. Dobbs’ Jose-Luis Regalado blocked the extra point.

“In the first half we came out a little slow,” Hastings coach Sammy O’Hare said. “It’s weird starting a game late in the first quarter with punting. We started out sluggish and got behind really quickly. We made some adjustments at half, recognized what they were doing and tried to just put our athletes in good positions to make plays.”

Dobbs drove down the field again on its next possession but fumbled, and Noah Unger recovered at the Yellow Jackets’ 10. Hastings couldn’t capitalize and the Eagles were able to respond on their next possession when Dann scored from 3 yards out to make it 28-6 with 4:02 left.

On the Yellow Jackets’ ensuing possession, Kennedy connected with Capuano again, this time on a 50-yard touchdown pass. But Dobbs responded right away when Dann broke a 56-yard touchdown run with under 2 minutes to play to close the scoring.

“If you hit that guy with a full head of steam, I don’t care how strong you are, he’s running you over,” O’Hare said of Dann.

The Eagles put constant pressure on Kennedy as he was scrambling on many plays. They recorded 10 sacks as a team, with Marsland bringing Kennedy down four times. Dann, Jacob Loran, Regalado, Dvanggie Montanpichardo, Sammy Georgioudakis, and Sanzo added a sack each.

“I love those guys up front,” Cox said. “They work really hard and love what they do. They really take a lot of pride in it and love getting after the quarterback. Those guys are really working hard all week and I’m happy it showed today.”

Despite the constant pressure, Kennedy was still able to create plays, particularly in the second half. He went 17 of 29 on pass attempts for 267 yards.

“Rob’s just got that natural ability to feel things out, move and slide in that pocket,” O’Hare said. “Sometimes he holds onto it a little bit long and takes a hit, but for the most part he gets rid of that ball pretty well and delivers a strike, often creating something out of nothing.”

Capuano caught five passes for 120 yards while Josh Thigpen had nine catches for 95 yards. Leading the Yellow Jackets on defense were Capuano and Patrick Walsh, who had nine tackles each. Tim Charles had five tackles and a forced fumble.

Unbeaten Dobbs Ferry (3-0) will look to keep its record that way when it hosts Albertus Magnus at 3 p.m. this Saturday, Oct. 2.

Hastings (0-3) hopes to get in the win column when it travels to Haldane, also on Saturday at 3 p.m.

“I like the progress. I think it’s just made them stronger and more tight-knit as a unit,” O’Hare said, evaluating the team through three games. “I’m looking forward to next week against Haldane and seeing what we can do against them on a short week.”

Ardsley 28, Bronxville 6: Jack Phelan continued his torrid start, rushing for 185 yards on 19 carries and three touchdowns in Ardsley’s 28-6 win over Bronxville on Sept. 24 at Harrison High School. The Panthers jumped out to a 21-0 lead early in the second quarter.

Ardsley senior quarterback Michael Belarge was four of sevn on pass attempts for 43 yards. He fired a 17-yard touchdown pass to Ryan Watson to start the scoring.

Christian Dash forced a fumble that was recovered by Michael Hanney and set up a score for the Panthers. Jaden Levy added an interception and Belarge had a fumble recovery.

The game was originally scheduled to be hosted by Ardsley, but a plan for portable lights fell through.

Irvington vs. Poughkeepsie cancelled: Irvington’s homecoming game with Poughkeepsie, which was scheduled for Sept. 25, was cancelled because the Pioneers were unable to field a team due to the prevalence of Covid-19. The Bulldogs tried to find a replacement opponent but failed, as it was too short notice from Poughkeepsie.