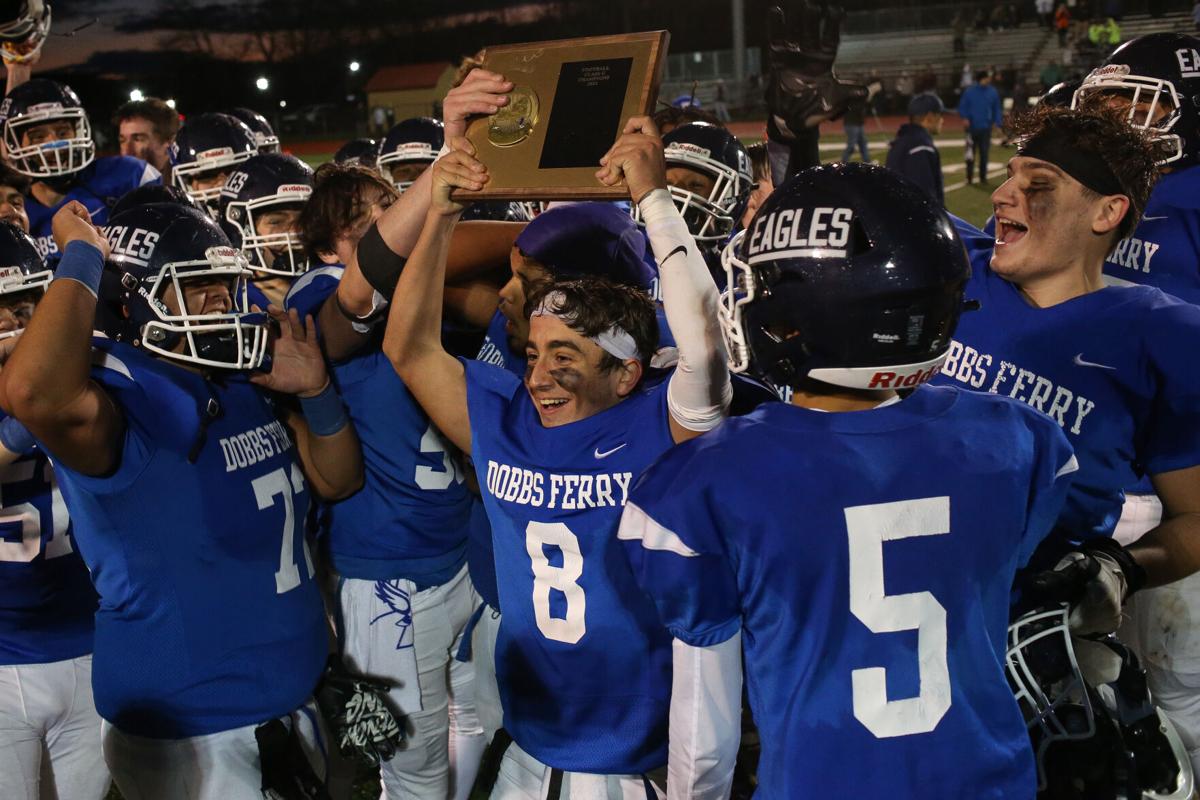 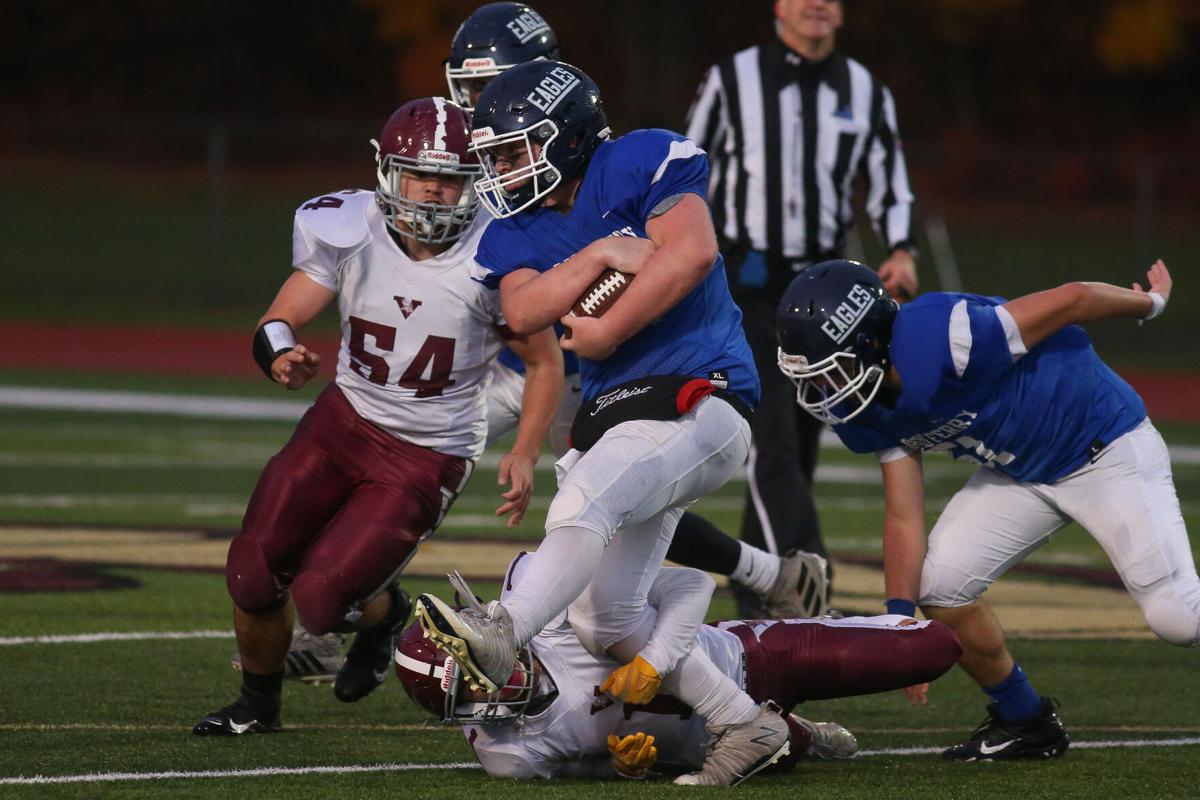 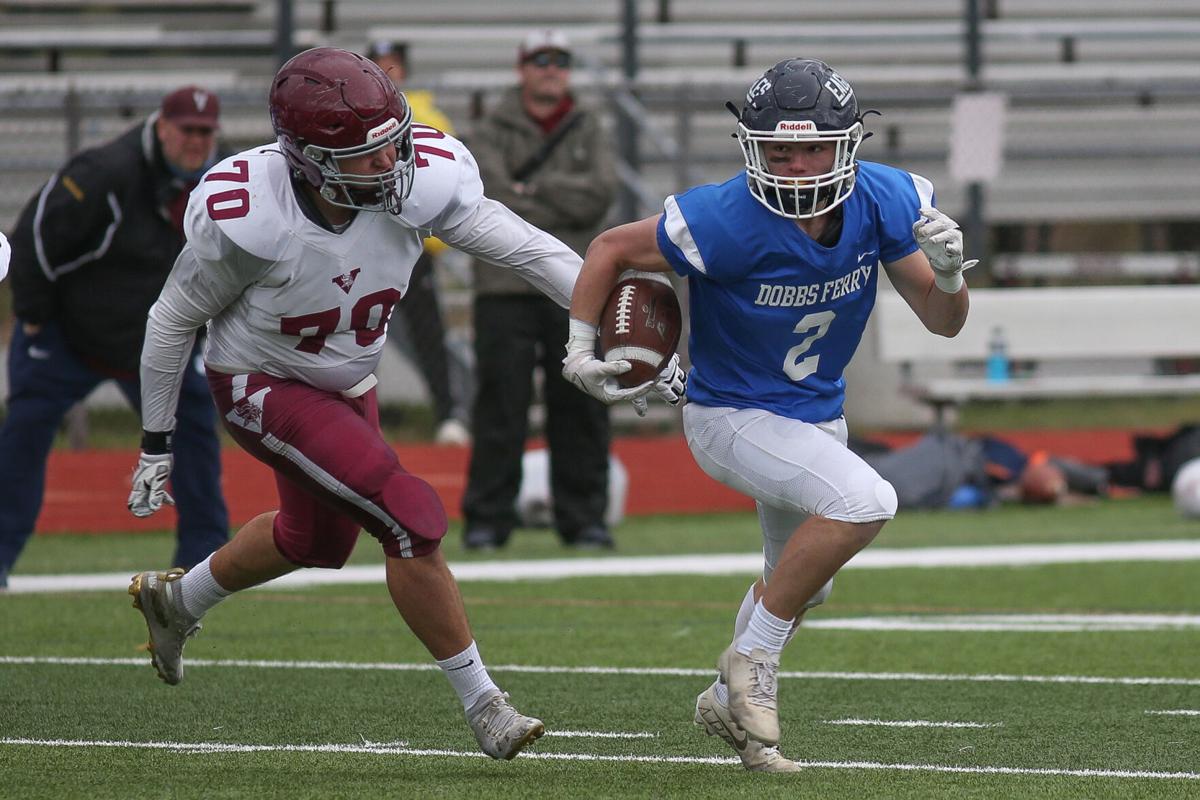 Dobbs Ferry’s Robert Sanzo rushed for 184 yards and a touchdown. 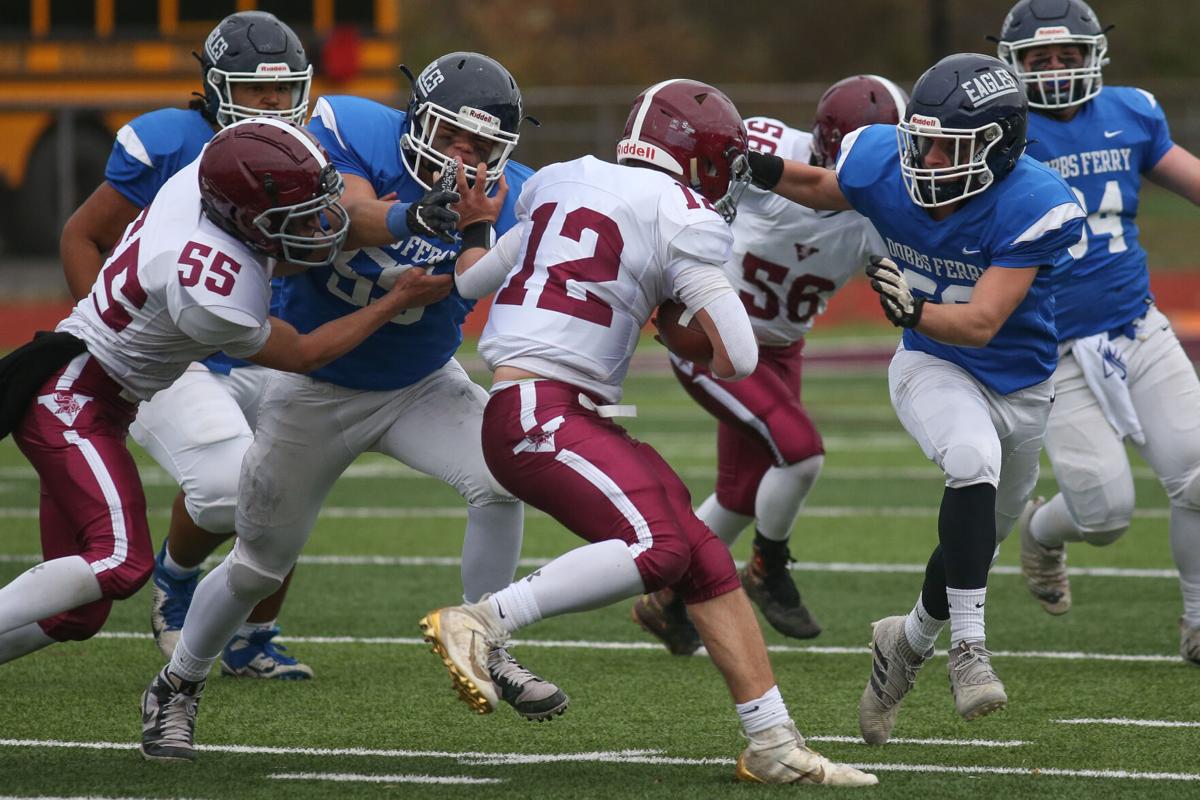 Dobbs Ferry’s Robert Sanzo rushed for 184 yards and a touchdown.

Walking through the Dobbs Ferry community, senior captain Jose-Luis Regalado had heard about past Eagles football teams that had gone on to win section championships.

Regalado and the Eagles were ready to add themselves to Dobbs Ferry lore when they took on Valhalla in the Section 1 Class C championship game on Nov. 13. The Eagles did that behind a dominant second half in a 41-14 win in the Section 1 finals at Arlington High School. It was the Eagles’ first section title since 2018 as they improved their season record to 10-0.

“It means everything,” said Regalado, who was named the game’s Most Outstanding Lineman. “In 2019 we lost to this very team, so this game was very important to us, and winning this section chip feels incredible.”

He continued, “Going around town, there’s so many undefeated teams before us and it just feels amazing to be like, ‘Hey, we’re carrying on tradition.’”

Junior Brian Dann and senior Robert Sanzo led the offense, combining for 399 rushing yards and five touchdowns. Dann ran for 215 yards on 26 carries and four touchdowns on his way to being named the game’s MVP. Sanzo rushed for 184 yards on 14 carries and a score.

“Those are two special kids and I’m just really proud of them and really happy for them the way they played today,” Dobbs Ferry coach Joe Cox said. "They’ve invested so much into this and into the team.”

With the score tied at 7-7 with 6:44 left in the second quarter, thunderstorms caused a 2-hour delay. (With each rumble of thunder, another half hour is added to the restart clock.)

“It was definitely a little bit of a different kind of afternoon,” Cox said. “The radar looked so bad at times. We didn’t know if we were going to be in there until 5 or 6 o’clock. Our guys handled it well. When the time came it was, ‘Put your gear on and let’s go play football.’”

When the game resumed with Dobbs Ferry having the ball at Valhalla’s 17, it was the Dann show. Dann, a 5-foot-10, 210-pound bruiser of a fullback, had carries on Dobbs’ first three plays out of the lengthy break and punched it into the end zone on a 4-yard run with 5:32 left in the second quarter. Jhonatan Almaras, a senior captain, kicked the extra point for a 14-7 lead.

“We knew we had to come out here and start swinging because they were going to swing first,” Dann said. “We just punched them right in the face and we executed well.”

He continued, “I think we were well prepared and had a great week of practice. That led us to the outcome today.”

On Dobbs’ ensuing possession, it was Dann again as he rumbled 38 yards to the Vikings’ 1-yard line and scored on the next play to extend the lead to 21-7 with 2:16 left in the first half.

“Honestly, we made a couple adjustments during the delay but we were still confident in our game plan,” Sanzo said. “We tried to stay as locked in as possible.”

Valhalla, however, was able to answer with 8 seconds left in the half when quarterback Michael Dawson connected with Devan Cooper on a 30-yard strike to send the game into halftime with the Eagles leading 21-14.

The second half was all Dobbs Ferry.

Dann scored his third touchdown of the game on a 34-yard run to give the Eagles a 28-14 lead with 4:56 left in the third quarter.

“It’s amazing to watch because he’s living that lineman dream of being a starting center freshman year and then going to fullback,” Regalado, an offensive tackle, said of Dann. “We know he’s doing his job and we know that he’s going to do it all the way for us.”

The Vikings drove deep into Dobbs territory on their next possession, but senior linebacker Sammy Georgioudakis stripped the ball carrier and recovered a fumble late in the third quarter. It was the last time Valhalla threatened to score.

On the first play of the fourth quarter, Sanzo jetted around the right edge and up the sideline en route to a 47-yard touchdown run to extend the lead to 34-14.

“The key to our success started up front and from our split ends,” Sanzo said. “They gave us key blocks and big holes that made it easy for us to get into space and make people miss. They’ve done a great job all season doing that for all our backs.”

Dann closed out the scoring with his fourth touchdown of the day with 2:15 to play. Almaras made his fifth extra point to make it 41-14.

Almaras had returned an interception 31 yards for a score to give the Eagles a 7-0 lead midway through the first quarter. Valhalla answered on a touchdown pass with 8 seconds left in the quarter to tie the game at 7-7.

Dobbs Ferry also defeated Valhalla 34-7 on Oct. 22, during the regular season. In the 2019 section finals, the Eagles fell to the Vikings 21-7 and also lost to them during a Covid-shortened 2020-21 season that was moved to the spring.

The Eagles now enter the state tournament where they will face Section 9’s O’Neill in a Class C state quarterfinal at Mahopac High School this Saturday, Nov. 20, at noon.

“It means a lot to this whole team to be section champs,” Sanzo said. “We cemented our legacy and no one can ever take this from us.”

There’s a tight bond among the Eagles players.

“We’re a family,” Dann said. “We love each other and have trust in each other. I think that ties it all together.”

And it all started with hard work as the Eagles were in the weight room training right after the spring season, which they finished 3-2.

“The last two years have been tough on a lot of people, and these kids in particular,” said Cox. “They’ve handled adversity the right way every step of the way.”

He added, “This group right now this year, they’re the caretakers of the program. They’ve just worked really hard and they’ve invested so much into it. I’m just proud of them and the way they’ve come together.”