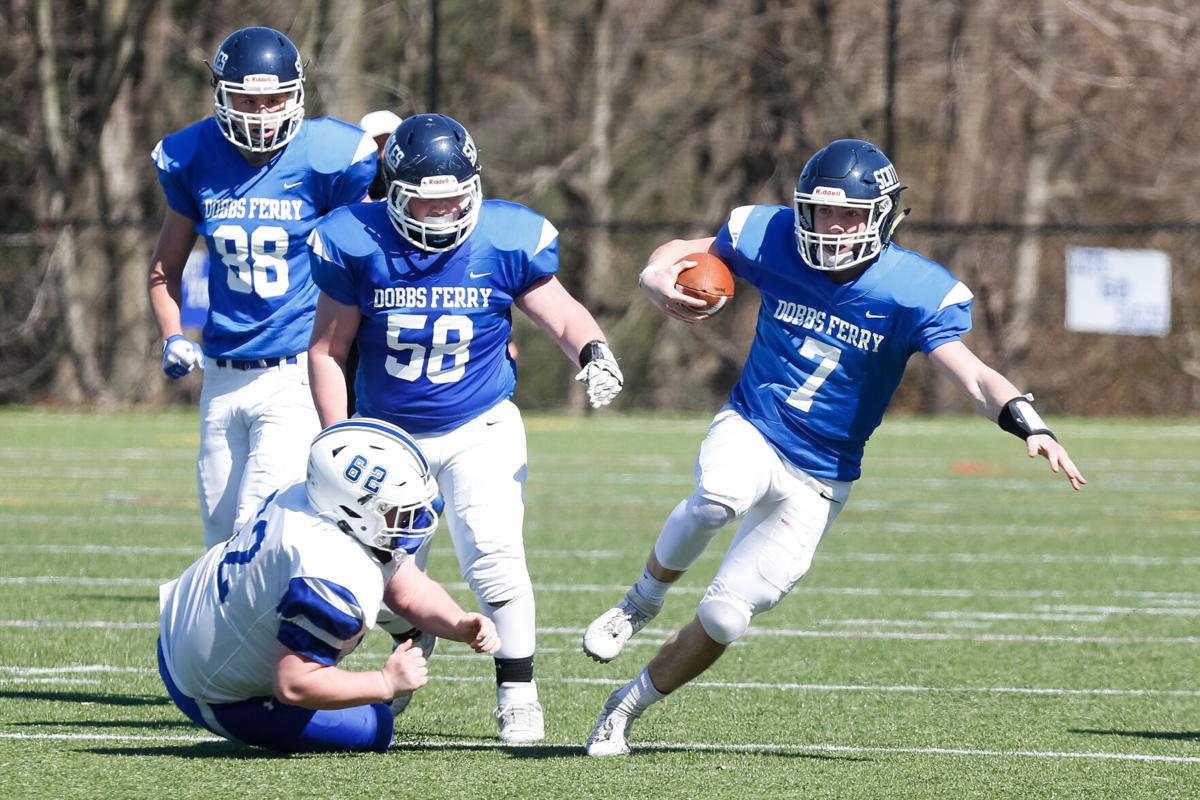 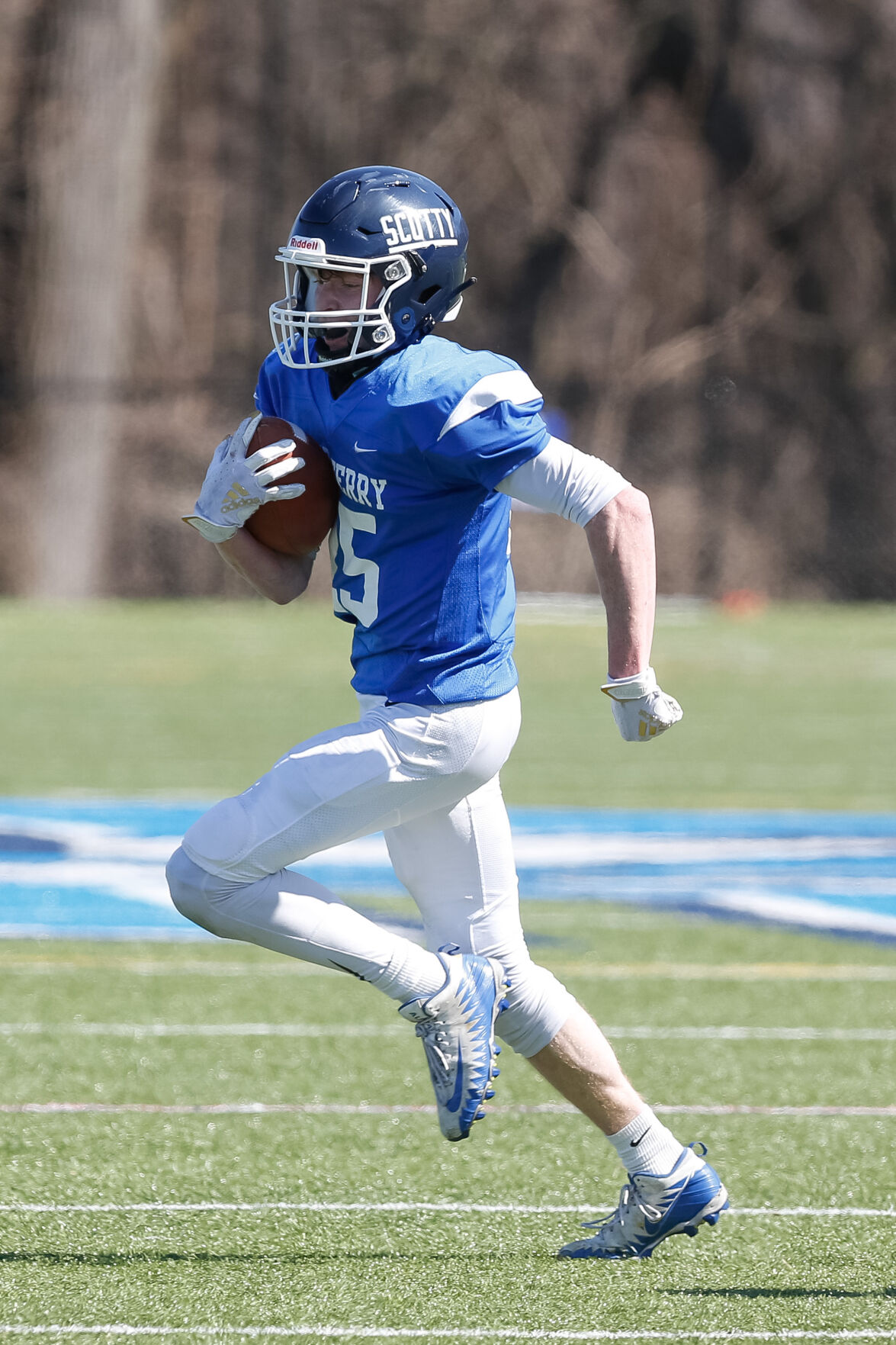 The Dann family has shifting from the offensive line to a skill position down pat.

In 2019, QB Harry Dann made the swap from guard to under center. This time around, younger brother Brian went from snapping the ball to his brother to being the recipient of handoffs out of his fullback position.

The sophomore made quite a debut as a skill position player on March 20, scoring five touchdowns to help lead Dobbs Ferry to a 50-26 opening-day win over visiting Haldane at Springhurst Elementary School.

The younger Dann had a pair of 1-yard scoring runs, another two from 3 yards out, and a fifth from 12 yards away as he rumbled for 94 of the Eagles’ 298 yards rushing.

Senior James McGovern added a trio of scores for the Eagles — an 11-yard reception from senior QB Harry Dann, a 3-yard run, and an 82-yard interception return.

It all added up to a happy return to the gridiron for the Eagles, who had waited 16 months for the chance to get back on the field.

“Sometimes you can forget just how long it has been since we played,” Dobbs Ferry head coach Joe Cox said. “The wait was a long one, but if it ends up that this is the only one we get to play, they would all do this all over again just to get that one chance.”

The day did not start out well for the Eagles. On their initial possession, Haldane’s Darrin Santos ripped the ball out of Zach Soderquist’s hands and raced 69 yards for the first score of the season.

The Eagles answered with a seven-play, 65-yard drive that ended with a Brian Dann 3-yard run and, after a Jhonathan Almaras PAT, a 7-6 lead midway through the first period.

“We knew that we had something special in him [Brian Dann] last summer,” Cox said. “He is an incredibly tough kid and an incredibly mature kid. He started for us at center as a freshman and we knew he was different.”

The coach added, “Still, this day is all because of what he did in the off-season — all of the work in the weight room. He earned this day; he created this day for himself. I am so happy and proud of him and I think his future is so bright.”

One play into the second period, it became 14-6 after a Brian Dann 1-yard plunge into the end zone. Meanwhile, the Eagles’ defense was stifling the Blue Devils’ attack.

Dobbs Ferry then made it three consecutive scoring drives, McGovern hauling an 11-yard pass from Harry Dann and racing into the left corner of the end zone — the TD increasing the home team’s lead to 21-6, which is where the game stood at the intermission.

“I wasn’t surprised by the success we had on offense,” Harry Dann said. “We have a great group of guys. I liked the way we bounced right back up after they punched us in the mouth a couple of times.”

Haldane came out strong after the break. Aided by a controversial pass interference call on McGovern that kept their second-half opening drive alive, the Blue Devils found the end zone on a 9-yard Daniel Santos to Drew Donaghy pass. The two-point conversion cut the visitor’s deficit to 21-14.

After Harry Dann tossed an interception, Haldane found the end zone again — this time a 21-yard run by Darrin Santos. The Eagles’ defense answered by stuffing Daniel Santos on his conversion run, keeping the home team ahead 21-20 with 7:01 to go in the third quarter.

Needing a response, the Eagles’ offense moved 62 yards in seven plays with Brian Dann finding paydirt from 3 yards out with 3:19 left in the third period. McGovern added the conversion run to up the home team’s advantage to 29-20.

Cox elected an onside kick and the gamble paid off when Brendan Smith snared the ball on the Haldane 40. Six plays later, Brian Dann broke a handful of tackles and bulled his way into the end zone from a dozen yards out. Almaras’ PAT increased the Eagles’ lead to 36-20 just 10 seconds into the final quarter.

“I have to give a huge shout-out to my offensive line,” Brian Dann said. “They opened some huge holes for me today.”

He added, “Today was a fantastic day. We waited a long time to get back on here; we all put in a lot of work in the off-season getting ready for this day, and it was just a phenomenal day for all of us.”

McGovern then delivered the knockout blow, picking off Daniel Santos on the Eagles’ 18 and jitterbugging his way through traffic all the way to the opposite end zone for a touchdown and, after Almaras’ kick, a 43-20 Dobbs Ferry lead.

After Darrin Santos’ 1-yard TD run for Haldane, Brian Dann, who, along with at least a half dozen of his teammates battled cramps throughout the second half, capped the scoring with a 3-yard run with 2:25 left in the game.

Harry Dann led Dobbs Ferry with 106 yards on 18 carries, while McGovern gave the Eagles a pair of 100-yard rushers with 103 yards on 11 tries.

Dann completed 3-of-5 passes, all the completions to McGovern.

Darrin Santos paced Haldane with 111 yards and two scores on 13 carries. His brother, Daniel, was 11-of-21 throwing the ball for 132 yards, one TD, and three interceptions, all by McGovern.