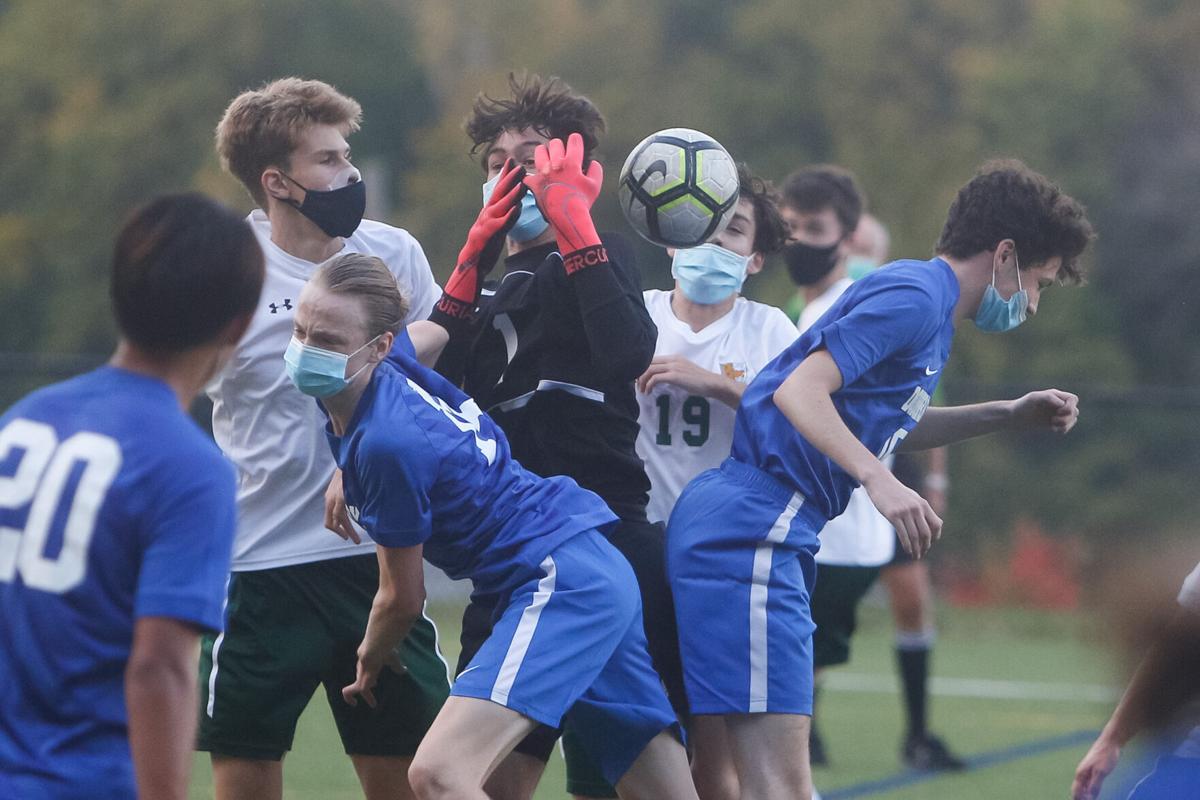 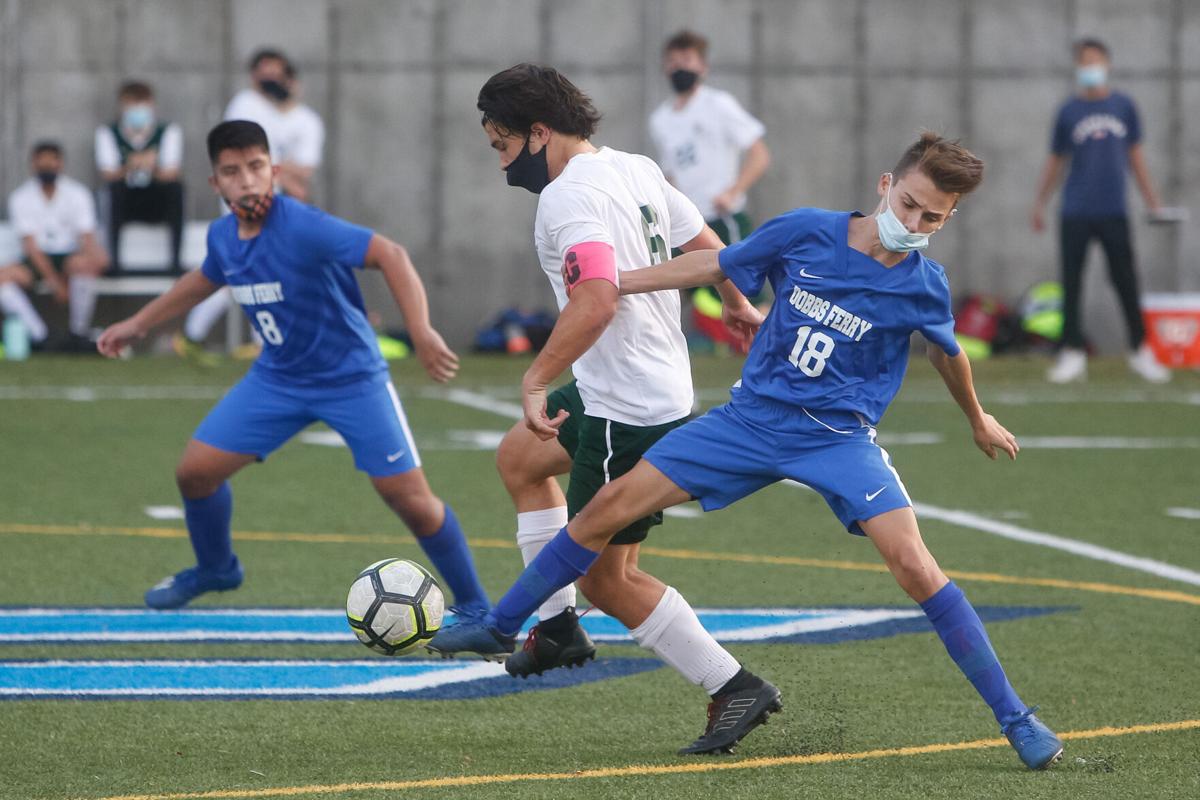 Bryce Jacobs of Hastings handles the ball against Dobbs Ferry.

Bryce Jacobs of Hastings handles the ball against Dobbs Ferry.

Camilo Granada-Cossio snapped a 1-1 deadlock with 2 minutes remaining to lift visiting Hastings to a 2-1 win over Dobbs Ferry on Oct. 21.

Luca de Novelis scored in the first half for the Yellow Jackets, assisted by Zeke Manly. Luis Kersten tied the score for the Eagles before the intermission. Felipe Iglesias made five saves in goal for Hastings, while Sebastien Orlowski recorded six stops for Dobbs Ferry.

“The first half, we played well, scoring early,” Hastings assistant coach Richard Kavy said. “Dobbs capitalized on a mistake and scored with 6 seconds left in the first half.” That goal, he added, clearly signaled “a momentum shift as Dobbs came out the second half and dominated possession and pace.”

Kavy continued, “We started to get into a second-half rhythm at the 60-minute mark and were finally able to score a winning goal with 2 minutes left after an initial shot and a Dobbs keeper deflection.”

There was no building on the win over Dobbs Ferry, as the Yellow Jackets fell 3-0 at Irvington on Oct. 23 and then 4-0 at Ossining on Oct. 24.

In Ossining, the home team’s Yohance Douglas had two goals while Kevon Evans converted a penalty kick for the third tally and Malcolm Phillips closed out the scoring with a late second-half goal.

IRVINGTON started off this past week with a 3-0 loss to visiting Bronxville on Oct. 21. Will Redmen had a goal and an assist for Bronxville, which also received goals from Joey Gallo and Ellis Goodson. Liam Sawian had three saves in goal for Irvington before being relieved in the second half by Miles Demarest, who also recorded three stops. J.P. Swenson made one save in goal for Bronxville.

“Bronxville played really well as a team,” Irvington head coach Bernie Keating said. “We had some really nice combinations of passing, but are still getting used to playing together. There are a lot of positives we can take from the game to continue our growth as a team.”

The Bulldogs wrapped up the week with a 2-1 overtime win at Dobbs Ferry on Oct. 27. Isaiah Boyles scored the winner for Irvington, which also received a tally from Arjan Delija. Nathan Baker set up Preston Long for Dobbs Ferry’s equalizer. Demarest was credited with 11 saves in the Bulldogs’ goal, while Sebastien Orlowski made 11 stops in goal for the Eagles.

“We had 70 percent possession throughout the game, but Hastings’ stout defense and superior goalkeeping by Felipe Iglesias kept the score line at nothing to nothing until the 55th minute,” Ardsley head coach Eric Petrone said.

He added, “We had a high number of completed passes and communicated well. Hastings played very tough, but unfortunately had a number of leg cramps and injuries which forced early substitutions. A number of these were attributable to the field condition, which was poor.”

Ardsley next won the “Battle of the Panthers,” downing visiting Edgemont, 4-2, on Oct. 22. Ardsley picked up first-half goals from David Hay, Pierce Dillon, and Robert Watson for a 3-0 lead at the intermission. Hay’s second of the afternoon increased Ardsley’s advantage to 4-0 with 10 minutes gone in the second half. Aidan Muldoon recorded a pair of assists, while Alec Levi recorded one helper. Spiniello (seven saves) and Sebastian Lund (one save) split time in goal for Ardsley — Lund playing the final 20 minutes.

Michael Yang and Daniel Bench scored late in the game for Edgemont, who received nine saves from Sander Schuchat and one stop from Aarya Shah.

“We played great,” Petrone said. “In extremely sloppy conditions on our main field, we initially struggled to settle the ball... After the first mask break at the 20th minute, we began to pass the ball well and find runners.”

Ardsley also fell, 2-1, in Chappaqua to host Horace Greeley on Oct. 26. The Panthers led early off a goal from Robert Watson 3 minutes into the match. The Quakers tied the game at 1-1 on a Matt Burack goal 10 minutes later. Owen Parsons netted the winner in the second half for Greeley.