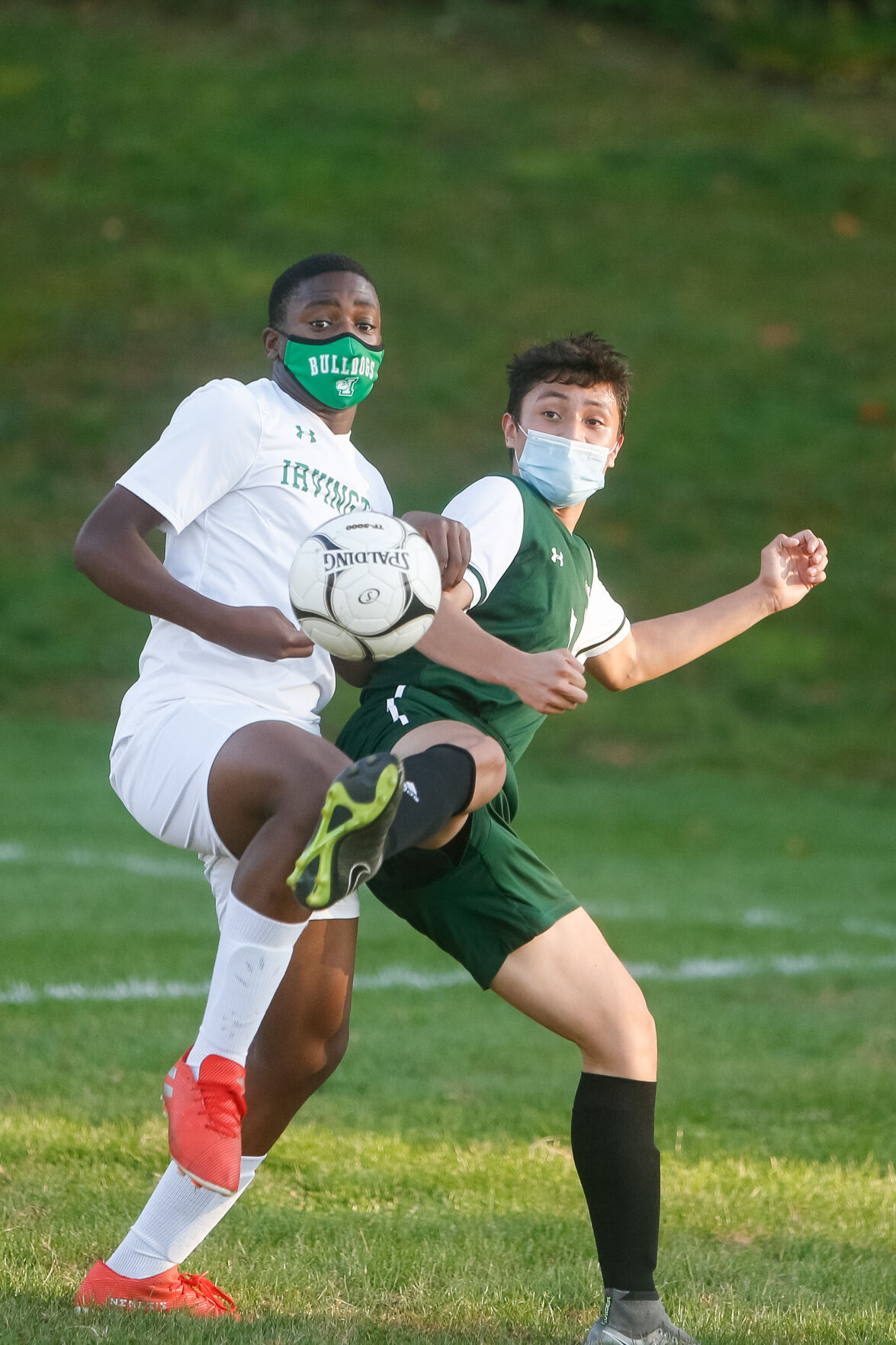 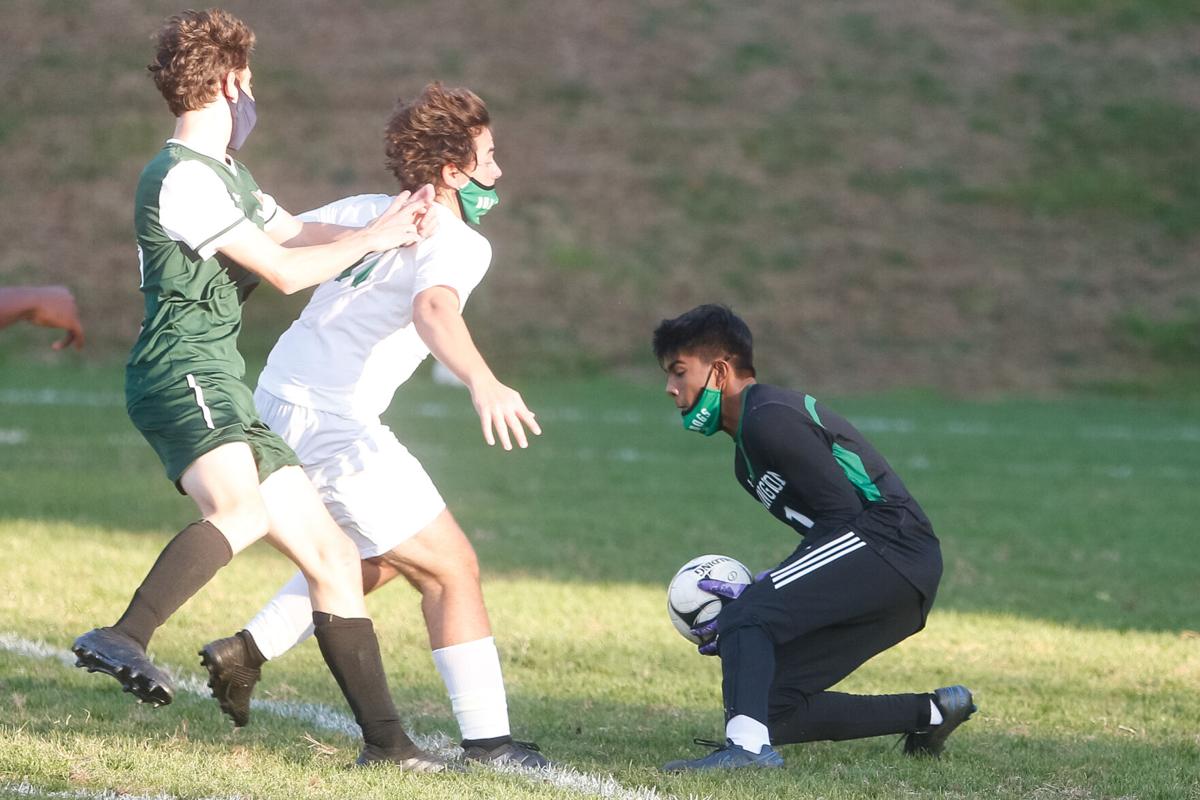 Irvington keeper Liam Sawian makes a save against Hastings.

Irvington keeper Liam Sawian makes a save against Hastings.

Ardsley received two goals apiece from Robert Watson and Pierce Dillon and won for the fifth time in six outings, downing host Sleepy Hollow, 4-0, on Nov. 4. Both of Watson’s goals were in the opening half, while Dillon’s pair were after the intermission.

The victory happened a day after the Panthers blanked visiting Edgemont, 1-0, behind a first-half goal from David Hay.

“The team and I were excited to head over to Edgemont on election night…” Ardsley head coach Eric Petrone said. “This was also our second game on turf, after frontloading all of our home games on our soggy grass field. We finally started getting used to passing. In our previous turf game at [Horace] Greeley we couldn't settle the ball.”

“That said, Edgemont had a lot of chances, but Vincenzo [Spiniello] played great, notching eight saves,” Petrone said of his goalie. “We had a lot of opportunities on net, but Edgemont's goalie, Sander Schuchat, played an outstanding game and kept us off the score sheet, also making eight saves.”

The following night, under the lights at Sleepy Hollow, the Panthers started slowly.

“Having to play back-to-back with masks was tougher than expected,” Petrone said. “Sleepy had a few chances in the first 15 minutes as the score remained 0-0. Robert Watson then awoke and scored his two best goals of the season — one with each foot — to bring the score to 2-0 at half.”

The coach continued, “In the second half, however, we unluckily couldn't find the net for 30 more, tense minutes. Watson and David Hay combined for 10 shots on target over that span. It was Pierce Dillon in the 70th and 75th from center-defensive back that broke the game open for us scoring the third and fourth goals of the contest.”

The Panthers closed out their week by rallying for a 2-1 win in Cross River over host John Jay. The home team led 1-0 at the intermission on an Aiden Oates’ goal. Five minutes into the second half, Aidan Muldoon tied matters for Ardsley; then, 10 minutes later, Watson’s header proved to be the winner.

IRVINGTON came into the week off a 3-1 loss at Bronxville on Nov. 3. After a scoreless first half, Will Redman gave Bronxville a 1-0 lead 3 minutes after the intermission. Aidan Sullinarski made it 2-0 for the home team before Irvington’s Isaiah Boyles cut the Bulldogs’ deficit to 2-1. Ellis Goodson’s goal late in regulation time sealed the win for Bronxville.

“It was a good game — 0-0 at the half,” Irvington head coach Bernie Keating said. “They scored their first goal on a PK, then added a second on a set play a few minutes later. We scored on a PK earned by Isaiah Boyles after a nice run of play. Isaiah converted the penalty as well.”

J.P. Swenson made four saves in goal for Bronxville, while Miles Demarest recorded 15 stops in the Irvington cage.

On Nov. 9, Arjan Delija netted both Irvington goals in a 2-1 road win over Hastings. Boyles and Xavier Canfin had assists for the Bulldogs, while Liam Sawian was credited with seven saves in goal, including one on a PK in the first half that swung momentum Irvington’s way. Shortly after the save, Delija scored the first of his two goals. Zeke Manly had the lone Hastings goal.

DOBBS FERRY fell to visiting Alexander Hamilton, 1-0, on Nov. 4. Juan Henao-Escudero scored for Hamilton in the game’s opening minutes, and the Raiders’ defense made it stand up for the win.

The Eagles also downed visiting Scarsdale “B,” 2-0, on Nov. 6. This game was shortened to two, 20-minute halves after Scarsdale arrived about 20 minutes late for the 4 p.m. start.

HASTINGS got the game-winner 3 minutes into overtime from Chris Capuano and downed host Edgemont, 2-1, on Nov. 7. Zeke Manly had the assist on the winner as the Yellow Jackets rallied from a 1-0 deficit.

“Zeke Manly beat a defender down the far sideline and played a great ball across the box to Chris Capuano, who slotted in the game winner in OT,” Hastings assistant coach Richard Kavy said.

Isaac Erez had the equalizer for Hastings late in the second half, assisted by Malcolm McNulty.

“Isaac Erez made a great run toward goal, drawing the defender to the near post before going to the back post, knocking in the first goal of the game for Hastings,” Kavy said.

Felipe Inglesias made eight saves in goal for Hastings.