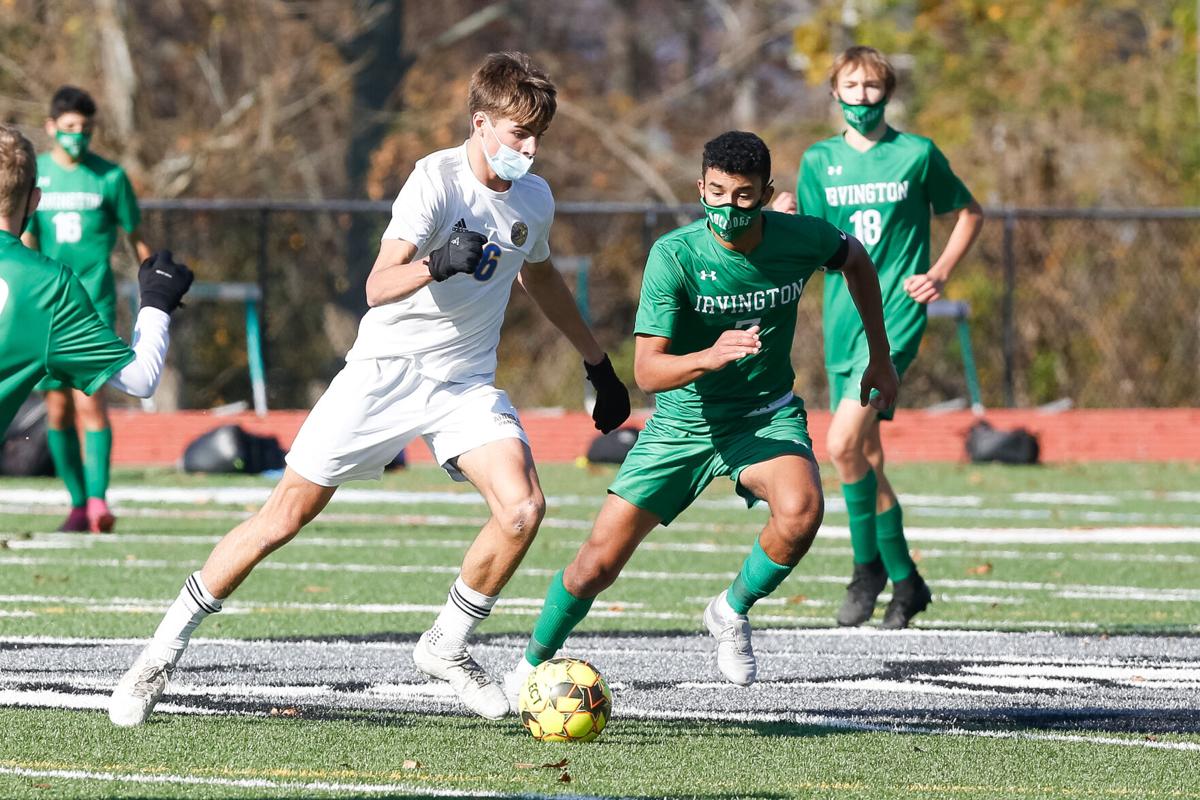 Ardsley's Pierce Dillon plays the ball away from Irvington’s Joseph Song on Nov. 14. 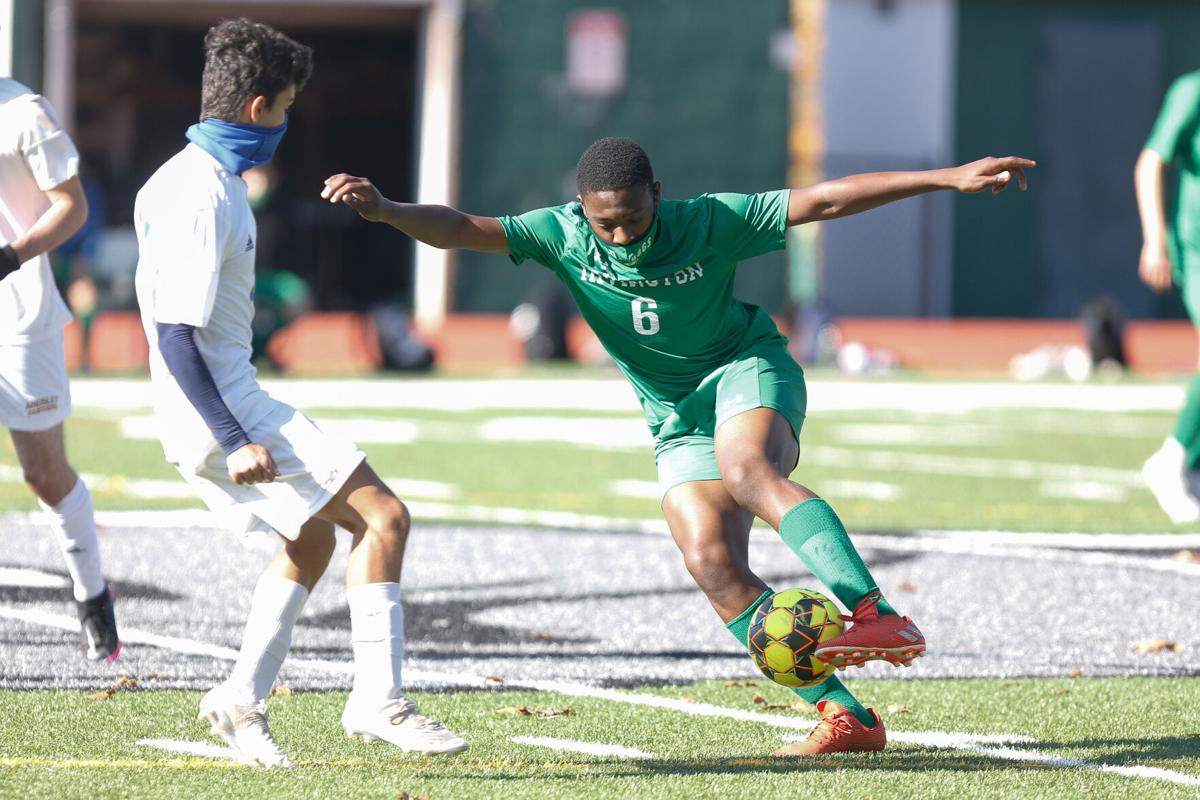 Irvington’s Mohammed Ahmed makes a move with the ball on Ardsley's Matt Cardoso on Nov. 14.

Ardsley's Pierce Dillon plays the ball away from Irvington’s Joseph Song on Nov. 14.

Irvington’s Mohammed Ahmed makes a move with the ball on Ardsley's Matt Cardoso on Nov. 14.

IRVINGTON got the break it needed when 10th-seeded Blind Brook’s fifth penalty kick sailed over the goal during the Southern Westchester Small Schools’ first-round match on Nov. 16.

By virtue of their 5-4 margin in the shootout, the seventh-seeded Bulldogs escaped with the opening-round win and advanced to a Nov. 18 quarterfinal at second-seeded Alexander Hamilton in Elmsford.

“A great win in a hard-fought game,” Irvington head coach Bernie Keating said. “I felt like we had a ton of chances that we did not convert on in the first and second half. In overtime, both teams seemed pretty gassed, but neither would give in and let the other get the breakthrough goal.”

Irvington began this past week with a 3-2 loss at Briarcliff on Nov. 11.

The Bulldogs led 2-0 with less than 7 minutes remaining in regulation time, off of goals by Boyles and Rahul Srivastava, both assisted by Delija.

Tyler Cho then scored for the Bears with 6:47 remaining. With a 7 seconds left in the second half, Luca Vargish netted the equalizer. In overtime, Ethan Klar’s first career varsity goal capped the comeback win for Briarcliff.

“Really tough one, but a lot of positives,” Keating said. “We put ourselves in a good position to win the game, up 2-0 with 7 minutes left — just need to work on closing the game out and matching intensity when the game gets close.”

In goal, Liam Sawian made a dozen saves for Irvington.

Also in the first round of the Small Schools’ bracket, 12th-seeded and visiting DOBBS FERRY succumbed to fifth-seeded Rye Neck, 2-0, on Nov. 16. Matt Pereira and Josh Rubin tallied for the Panthers, who played at the fourth-seeded

Leffell School in Hartsdale in the quarterfinals on Nov. 18.

Ninth-seeded HASTINGS suffered the most heartbreaking defeat of the first round, losing 4-3 in overtime at eighth-seeded Westlake in Thornwood.

The victorious Wildcats tied the game to force overtime as Joe Corona scored with 22 seconds left in regulation. Five minutes into overtime, Alex Guaman finished a pass from Gianluca Ruggiero to send the Wildcats home winners.

Camilo Granada-Cossio and Isaac Erez traded goals with Westlake’s Martin Sunjic and Isaiah Ortiz to leave the game knotted early in the second half. With 20 minutes left in the second half, Erez converted a penalty kick to give the Yellow Jackets the 3-2 lead.

Westlake’s win moved the Wildcats into a quarterfinal match on Nov. 18 at top-seeded Bronxville.

On Nov. 13, Granada-Cossio scored with 7 seconds remaining in regulation to lead Hastings to a 1-0 win over host Dobbs Ferry at Springhurst Elementary School. Felipe Inglesias made six saves in goal for Hastings, while Sebastien Orlowski made seven stops for Dobbs Ferry.

ARDSLEY closed out the regular season on Nov. 14 with a 2-0 win at Irvington that sealed the third seed in the Southern Westchester Large Schools’ tournament. Eddie Santos converted a penalty kick in the first half to open the scoring for the Panthers. Pierce Dillon tallied his seventh goal of the season in the second half to clinch the victory.

“Our game at Irvington went exactly as planned/hoped, although there were some nervous minutes,” Ardsley head coach Eric Petrone said. “We had played the night before at John Jay-Cross River, so to turn it around so quickly, with the playoffs beginning this week, I didn’t want to hurt or injure my starters.”

He continued, “As the JV season is over, I brought up five players from that squad, and ended up playing 24, most before we even scored a goal. [Irvington] coach [Bernie] Keating‘s team was well prepared and were in the game throughout.”

“Sebastian recorded two miraculous saves to keep the score line at 2-0 for the final,” Petrone said.

Ardsley opened the week by traveling to Cross River for the second time in five days and handing host John Jay a 2-1 defeat on Nov. 13.

The Panthers received a goal from Alec Levi with 15 minutes remaining to catapult them to the victory. From just inside the attacking third of the pitch, Levi split the Wolves’ defense by chipping the ball ahead and into the penalty box. Levi then tracked down the ball ahead of an onrushing Owen Rabii, the Jay keeper, and chipped the ball once again — this time over Rabii’s head and into the cage for the winning goal.

Pierce Dillon had opened the scoring by converting a 25-yard direct kick just outside the upper left corner of the penalty box, the boot curling over Rabii’s outstretched arms and into the upper right-hand corner of the goal.

“Was a great game,” Petrone said. “John Jay-Cross River play was really tough — their keeper made a lot of saves. They were especially good on counterattacks from 50-50 balls that we didn’t settle in the midfield.”

On Nov. 9, the Panthers rallied for a 2-1 win against John Jay at Cross River. The home team led 1-0 at the intermission on an Aiden Oates’ goal. Five minutes into the second half, Aidan Muldoon tied the game for Ardsley. Ten minutes later, Robert Watson’s header proved to be the winner.

“We got to the field kind of late and had a slow start to the game,” Petrone said. “We did not have our striker David Hay, so we moved a few players around and started Felipe Remon up top instead of at center back. We tried a few different variations through the first half, but were down 1-0 on a really well-played chip over Vincenzo [Spiniello]. The score line at the half was fair.”

The coach continued, “After moving Robert Watson up top and Alec Levi out to his position on the right wing, we started to click. We began to dominate possession and create a lot of opportunities down the left wing with Aiden Muldoon. We ended up with our best second-half performance of the season.”