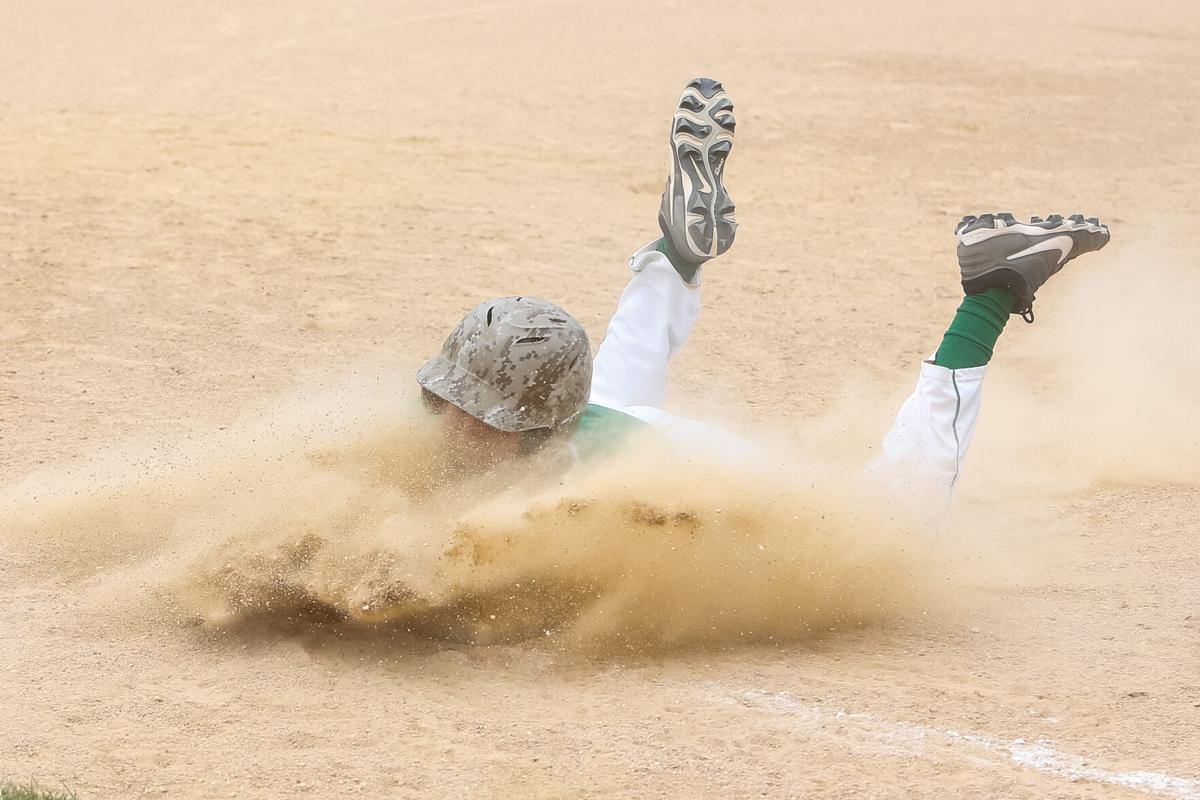 Irvington’s Eddie Hanlon slides into third base against Hastings on May 22. 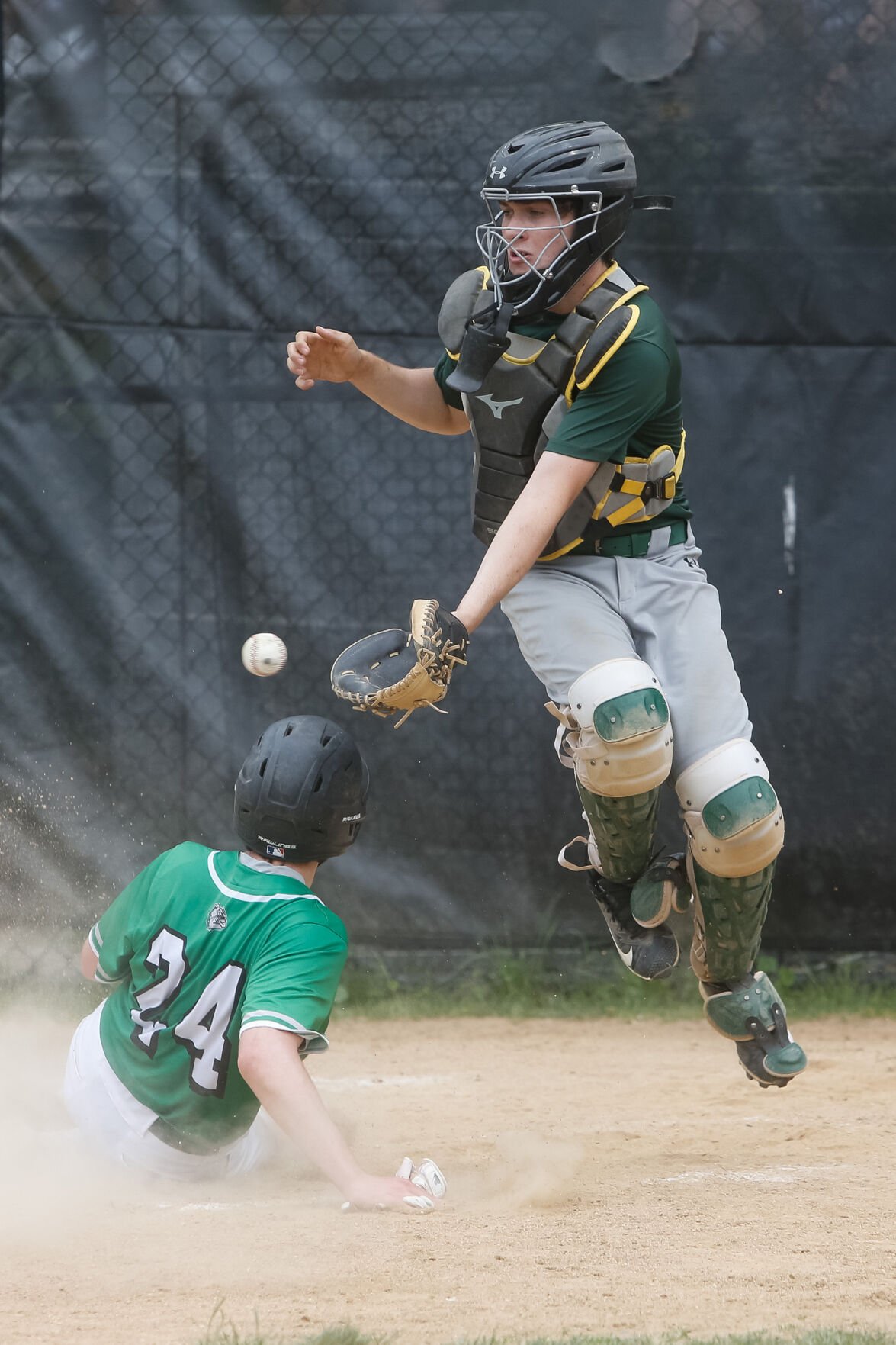 Irvington’s Adam Moskal slides into home plate as Hastings’ Frank Krapf leaps to catch the ball on May 22. 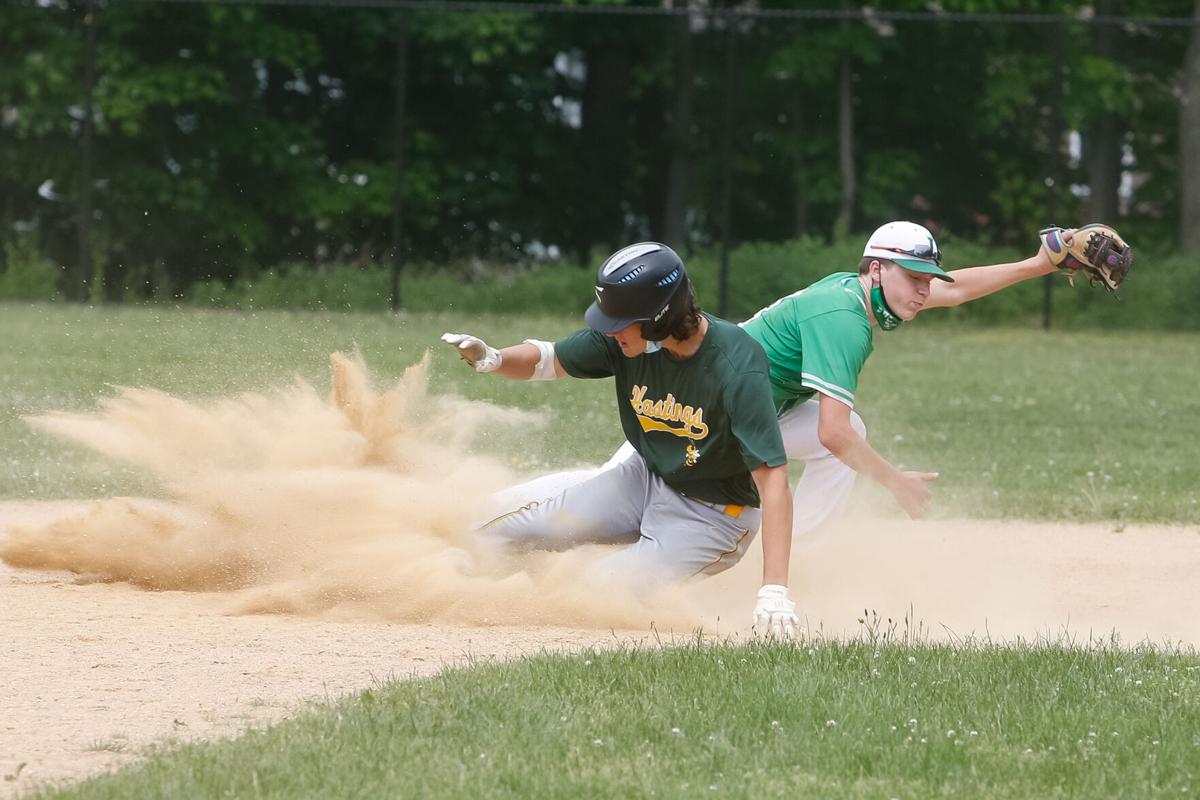 Irvington’s Jake Bryant stretches for a throw as Hastings’ Keith Capuano slides into second base on May 22.

Irvington’s Eddie Hanlon slides into third base against Hastings on May 22.

Irvington’s Adam Moskal slides into home plate as Hastings’ Frank Krapf leaps to catch the ball on May 22.

Irvington’s Jake Bryant stretches for a throw as Hastings’ Keith Capuano slides into second base on May 22.

Irvington and Hastings renewed their rivalry this past week by splitting a pair of games, with each team winning at home.

The Bulldogs trailed 4-0 heading into the home half of the sixth inning before pushing across all five of their runs.

Joel Mendoza led off the decisive inning with a walk for Irvington and proceeded to steal second base with Adam Moskal at the plate. Moskal then singled to score Mendoza with the Bulldogs’ first run.

Caleb Moyer then singled and, after the throw to third to get Moskal was late, scooted into second base to leave Irvington with two runners in scoring position. Trevor Annicharico followed with a double that scored both runners.

Eddie Hanlon walked to put runners on the corners for Kevin McLaughlin, who lifted a sacrifice fly that plated Annicharico and allowed Hanlon to move up to second. Stuart Graeber’s single then scored Hanlon with the lead run.

Graeber won the game on the hill for Irvington, going six innings, allowing five hits, four runs (three earned), walking two, and striking out four. Jake Bryant struck out the side in the seventh to pick up the save.

The Jackets avenged that loss on May 22, winning in walk-off fashion, 7-6. Hastings trailed 6-4 entering the last of the seventh and then capitalized on a pair of walks and an error to tie the game before a sacrifice fly by Luke Cizewski gave them the victory.

DOBBS FERRY kicked off the week by losing in walk-off fashion at Bronxville on May 19.

Peter Coquillette’s single in the bottom of the seventh scored Jack Gangemi, who had doubled a batter earlier, with the winning run for the host Broncos. Coquillette also picked up the win in relief.

Adam Schwartz pitched the first 4 2/3 innings for the Eagles, allowing four hits, three runs (none earned), striking out three, and walking six. Schwartz was also 2-for-3 at the plate with a triple, two runs scored, and a pair of RBIs.

Ryan Brunenays had three hits and knocked in a run for the Eagles, who also received an RBI apiece from Javonni Williams and Jacob Sellitti.

The following afternoon, Bronxville handed the host Eagles a 10-1 defeat.

Alex Graff pitched 4 1/3 innings for the Eagles, surrendering seven hits and three earned runs while striking out three and walking two, while Schwartz had a double and Brunenays an RBI.

On May 22 at home, the Eagles received 5 2/3 innings of two-hit, 12-strikeout pitching by Zach Soderquist and upended Blind Brook, 2-1. Soderquist also had two hits and scored the winning run.

The Eagles made the trip north to Putnam Valley on May 24 and came home with a 12-2 win. Schwartz starred in the mound and at the plate, tossing five innings of two-run, five-hit ball, while striking out seven and going 3-for-3 at the plate with two runs scored and four RBIs.

Soderquist was 4-for-4 at the dish with a double, triple, four runs scored, and a pair of RBIs, while Javonni Williams went 3-for-3 with three runs scored and an RBI. Brunenays added two RBIs, while Brandon Astreicher knocked in one run.

HASTINGS opened this past week with a 12-1 loss to visiting Edgemont on May 19. Bryce Jacobs pitched five innings and surrendered three earned runs for the Jackets.

Harrison’s Parker Gibbons went five scoreless innings to open the game for the host Huskies on their way to an 8-2 win over ARDSLEY on May 20. Gibbons allowed two hits and struck out three over his five frames. Cal McCarthy had a pair of doubles and drove in two runs for Harrison.

“In the second inning, we gave up five runs where we made a mental and physical error,” Ardsley head coach Jeff Caldara said. “We seem to have one bad inning a game, and the crooked number is hard to overcome.”

The coach, though, was happy with Valle’s performance. “He has improved with every start,” Caldara said.

The Panthers suffered a 7-6 loss on May 22 to visiting Edgemont when tying run Chris Rossi was gunned down at the plate after tagging up on a fly ball to center by Avi Julka. Ardsley had entered the bottom of the seventh down 7-5 before a Tyler Griff RBI single cut their deficit to a single run.

James Kane had a hit, run scored, and three RBIs for Ardsley, while Robert Watson had an RBI triple and scored once. Jaime Rifas also had an RBI.

Ardsley tied the game at 1-1 in the home half of the first on an Edgemont error. They moved ahead 3-1 in the third on a run-scoring ground out by Kane and by Watson’s triple.

A two-run single by Kane in the fourth knotted the game at 5-5 and answered a four-run top of the stanza by Edgemont.

Edgemont pushed across single runs in the fifth and sixth to take their 7-5 lead.

Joe Ferraro took the loss for Ardsley, allowing only two earned runs out of the seven he surrendered as he was hurt by four errors behind him.

Ardsley suffered a walk-off loss at Edgemont, 8-7, on May 24. Sophomore Avi Julka gave Ardsley three strong innings in his first varsity start and was followed by Riley Feinhauer, who tossed 3 2/3 frames of one-run ball. Robert Watson and James Weber each had two hits and an RBI.