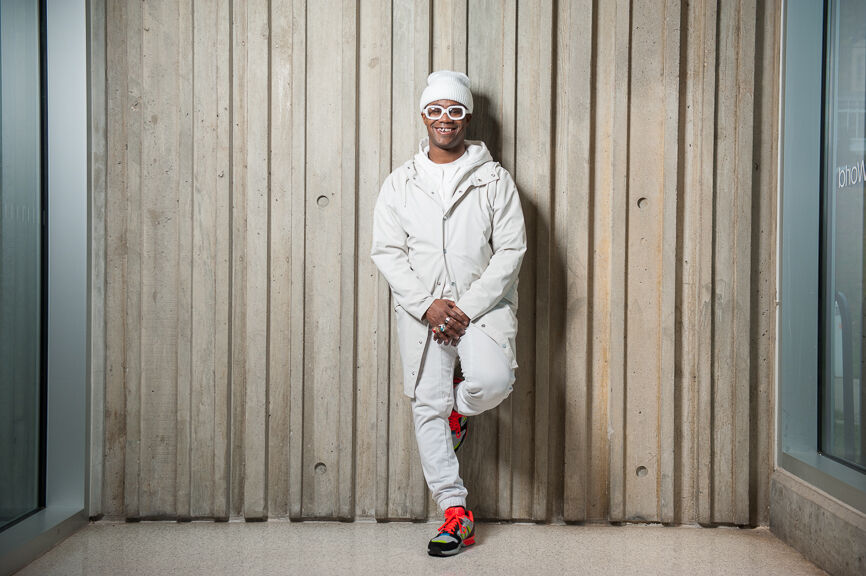 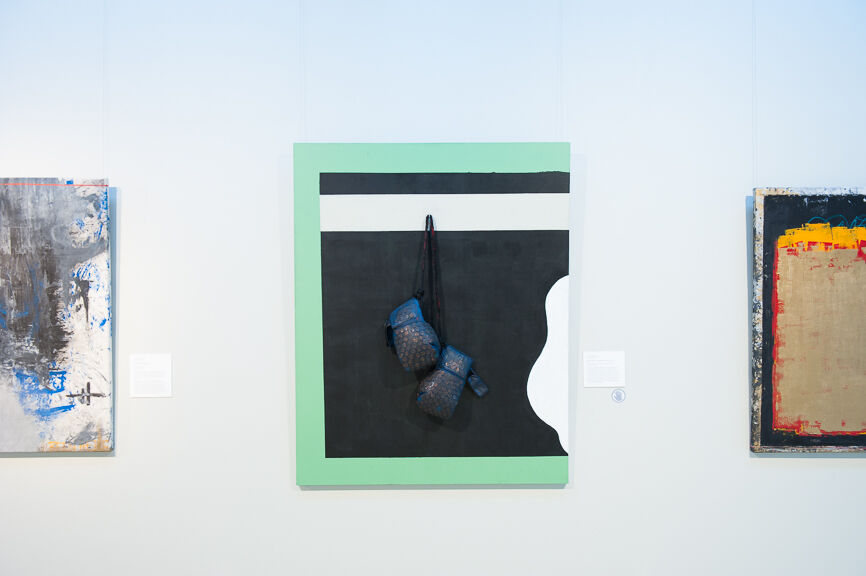 Robinson’s “Fighting for Change: Fist Full of Tears” (center) flanked by “Been Here All Along” (left) and “AbuELLA” (right)

Robinson’s “Fighting for Change: Fist Full of Tears” (center) flanked by “Been Here All Along” (left) and “AbuELLA” (right)

“The Hudson River Museum has positioned me to be a part of this great arc of history, and I humbly accept,” Jamel Robinson said from his Harlem residence and studio.

Five works, including the piece from which the show “Jamel Robinson: “Beauty from Ashes” takes its name, are being presented concurrently with the museum’s primary exhibition, “African American Art in the 20th Century.” Robinson is also HRM’s teaching artist-in-residence.

This is the first museum show for the 42-year-old Robinson, a multi-disciplinary artist whose output includes painting, sculpture, writing, and performance art. His work has been featured in several solo gallery exhibitions, most recently at the Established Gallery and the Ivy Brown Gallery in New York and the Gallery Von Schmordenfaden in Copenhagen, Denmark. In 2018, his work was featured in 100 Works, curated by Derrick Adams and other artists, and presented by ARTNOIR, LatchKey Gallery, and E+.

The five works that comprise “Beauty from Ashes” were assembled in response to the works included in “African American Art in the 20th Century.” Both exhibitions opened Oct. 15 and run through Jan. 16.

Being a visual artist was not on Robinson’s radar when he was growing up in his grandmother’s Harlem apartment — the same one where he lives and works today — nor when he attended Xavier High School, class of 1997, and SUNY Albany.

“I always saw myself as a poet, a writer, maybe eventually a professor, so I was majoring in English Lit,” Robinson said. “But life had other plans for me.”

Those “plans” included a multi-year struggle with alcohol and drugs. He is now celebrating 12 years of sobriety — and 12 years of teaching himself to be the accomplished and recognized artist that he has become, an artist unafraid to try new ways of self-expression.

His life as a painter began 10 years ago when a friend asked him to paint a poem on a canvas for a group show. The show was a success, according to Robinson, and he enjoyed the process. For a while he began to stencil, first on paper then on canvas.

“Then, in December 2011, I grew tired of stenciling and went to an art supply store, and began filling up the apartment with paint,” Robinson said. “I began teaching myself the art of abstract self-portraiture and did that for a long time.”

Ultimately, the Robinson grew tired of working with a brush, and of self-portraits, and began painting with his hands and using squeegees to manipulate the images. Although not comfortable with people watching him at work, that attitude changed as well. Videos on his website show him in his studio, predominantly on the floor in what he calls “a bent position of surrender.”

“The process is physical,” Robinson states about “Beauty from Ashes” in a statement posted on the HRM website. “While the majority of works in this series are abstract, it’s impossible to ignore the presence of the body, my body, and the intended viewer.”

In a New York Times review published last month, reporter Alina Tugend wrote that “Fighting for Change: Fist Full of Tears” “encapsulates the artist’s love of wordplay as well as philosophy about what it means to be a Black man making art in America.”

The boxing gloves covered with pennies in “Fighting for Change” together with the multi-media piece “Beauty From Ashes” contain materials and images that Robinson uses to convey the struggles of African Americans: pennies, which are often devalued; sand, which Africans crossed to get to the slave ships; a flag and a cross, to convey how country and religion have been used oppressively; as well as chains, ropes, cotton, dried roses, and other totems.

“This work speaks from the past to the present,” Robinson said. “Much has changed, but I do not believe enough has changed in everything relating to the Black experience in America.”

Robinson’s first visit to the Hudson River Museum occurred several years ago when he was invited to contribute a piece to the Yonkers Arts Weekend. Then, in 2019, when his friend the visual artist Derrick Adams was planning an exhibition there, Robinson visited the museum again.

“This was when I met the Hudson River Museum family,” Robinson recalled. “It is a privilege to be part of that family now, as teacher artist-in-residence.”

“We were aware of him, intrigued by both him and his work,” said Laura Vookles, chair of the curatorial department. “He met the requirements of being a teacher artist-in-residence, especially as that position has evolved over time. Now, it is a position where one can interact with many of the museum’s personnel and programs.

“While the teacher artist-in-residence is always compensated, this year the funding of the position is really special,” Vookles said. “It is being funded by the widow of Alvin Hollingsworth, a leading African American painter of the 20th century.”

Robinson is relishing the opportunity, especially the interaction with the junior docents, who are students from Yonkers public high schools.

“I’m doing pretty good, actually, and made my way out of a grey area,” he said. “The greatest part of this journey is working with the junior docents — the youth, the future. They have taught me so much about the future of this world, and if there are more like them out there, we will be OK. My vision was to equip them with the courage to be audaciously creative.

“If the museum says I’m qualified to do this, I can tell them they are qualified to do these things, too,” Robinson concluded. “We plan and then we implement programs. It is the greatest collaborative effort.”