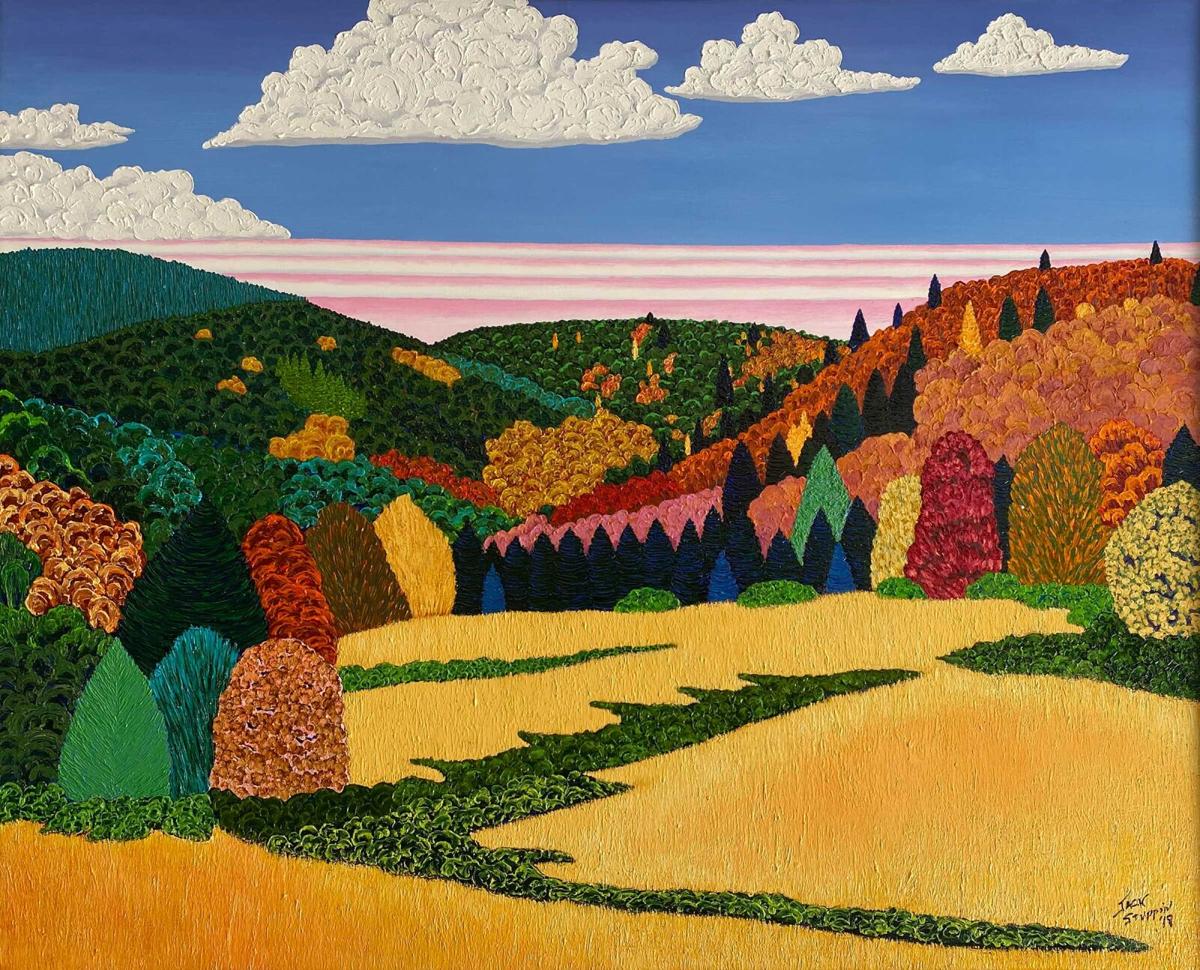 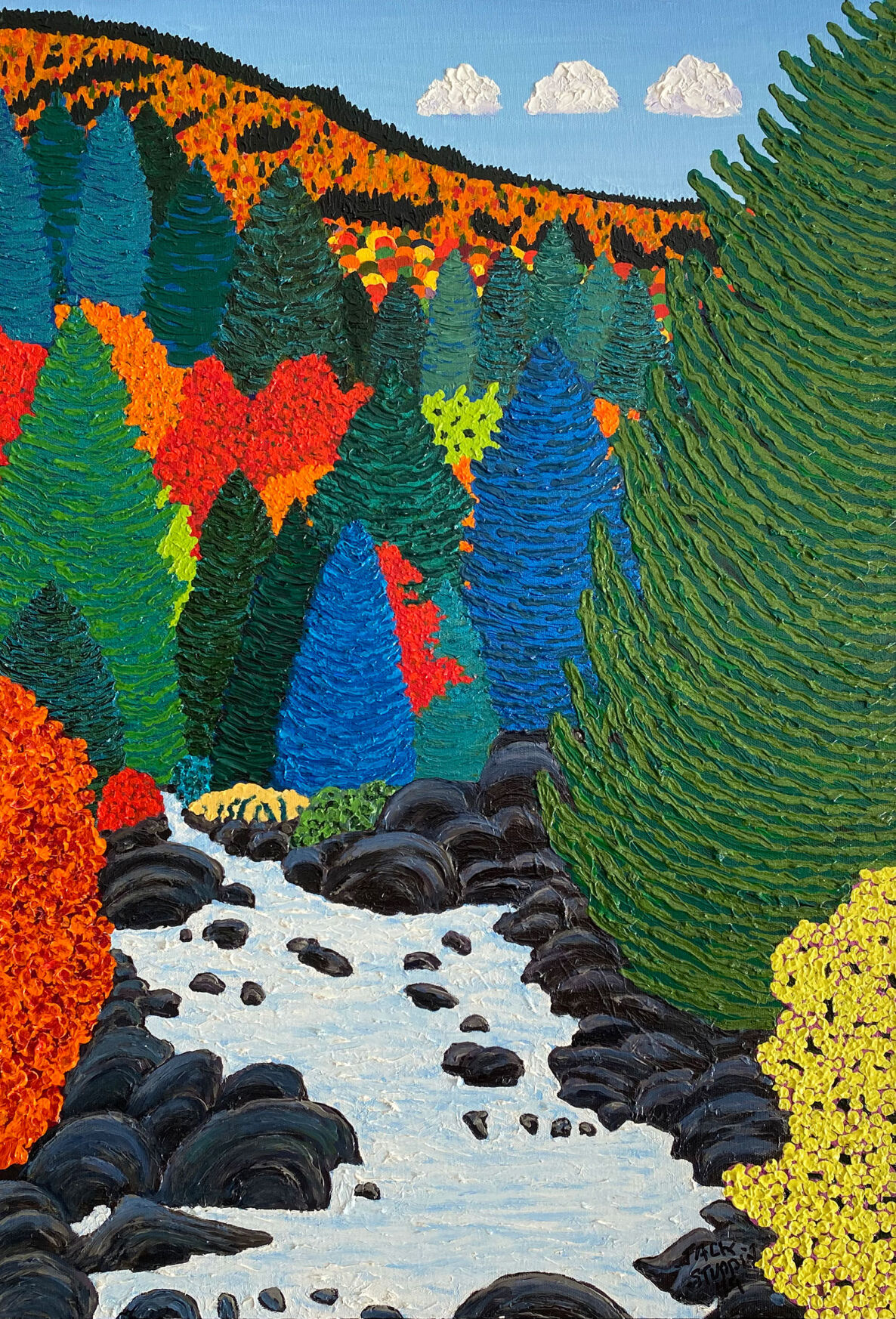 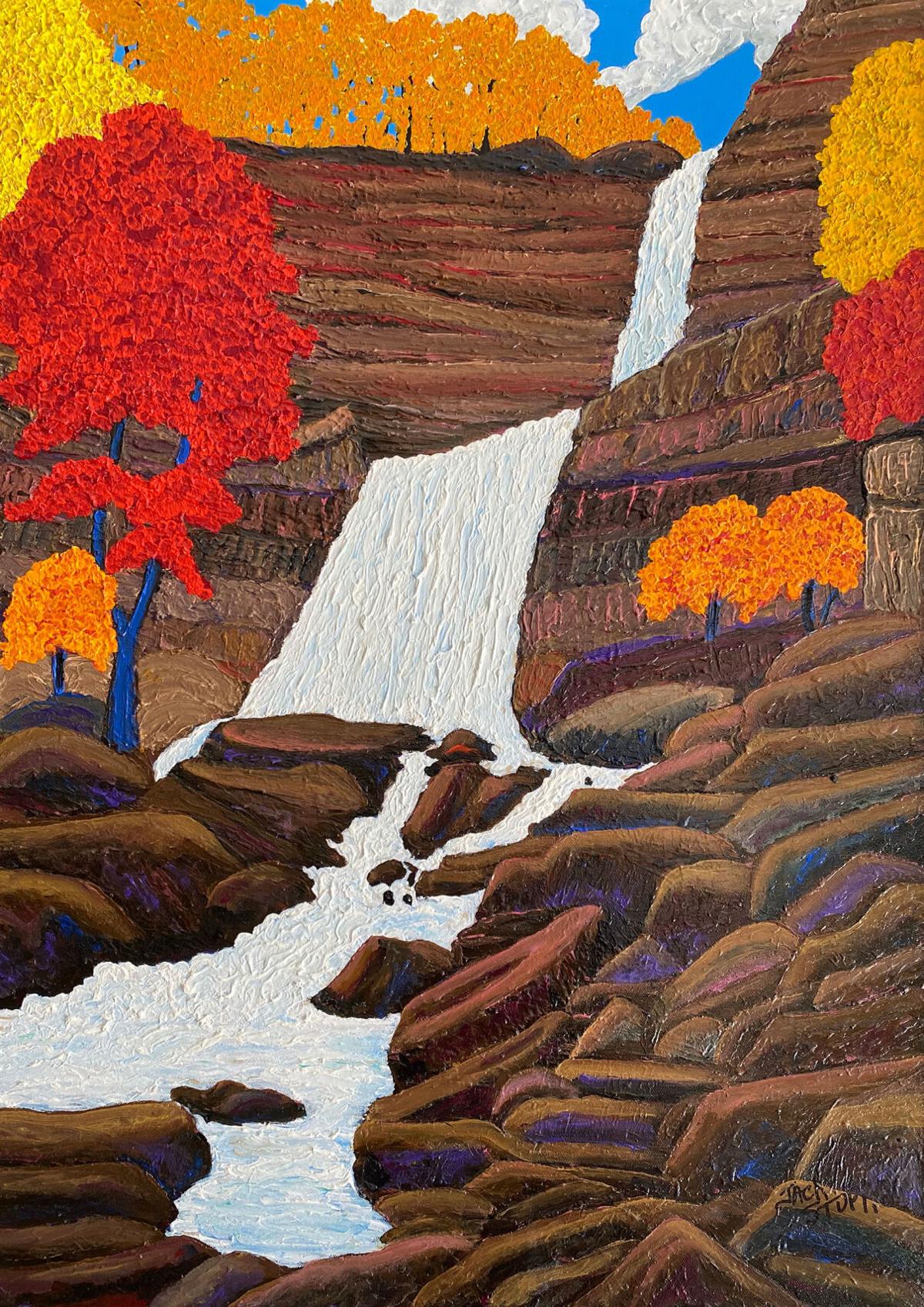 “When I start a painting, I have no idea what it is going to look like,” Yonkers-born artist and entrepreneur Jack Stuppin said. “It is a journey, with one discovery after another. I get lost in the process, and disappear in the work.”

Nine of the 87-year-old artist’s vibrant oil-on-canvas landscapes are on view now through Sept. 12 in “Jack Stuppin: The Beginning of My World” at the Hudson River Museum. The paintings, from 2008-2020, are part of a series he calls “Homage to the Hudson River School.”

The painting “Catskills Tatashu Farm” is in the Yonkers museum’s permanent collection. Stuppin’s work can be found in 21 museums throughout the U.S.

“For the first years of my life, the Hudson River and the Palisades were the end of my world,” he said from his home in Northern California, where he has lived for 35 years. “Now the Pacific Ocean is the end. But I’ve been drawn back to the ‘beginning’ often in my work.”

While Stuppin does not recount his life story as a saga, it is just that, full of twists and turns, all leading to success not only as an artist, but as a businessman as well.

After graduating from Yonkers’ Gorton High School in 1951, Stuppin enrolled at Manhattan’s Columbia College where he received a bachelor’s degree in 1955, working full time to pay his tuition.

“I’ve always been lucky. I was drawing from the time I was a boy, 11 or 12,” he recalled. “My parents — my dad worked in the post office, which was a good job in the Depression, and he dabbled in watercolors, and my mother was a teacher — thought I should take lessons. If I saw something, I could draw it.

“Then I took an art course at Columbia, with models for the first time. I had a fabulous teacher, Peppino Mangravita, and he changed my life,” he continued. “He took a look at my work, which was done in charcoal, and gave it a big X. ‘Where is your mind, heart, soul? Why paint in a way that a camera can do better?’ Peppino said. This liberated me from having to draw something exactly as it was.”

After college, Stuppin joined the U.S. Marine Corps and visited San Francisco. He was determined to live there once out of the Corps. But first came deployment to Japan, where he found an ancient art form that influenced the rest of his life.

“I studied ikebana, the art of flower arrangement, where the world is divided in three parts: heaven, earth, man,” Stuppin said. “To this day, in all my paintings, however many colors I use, I always use an odd number, never even.”

In 1958, back in the States and out of the Marine Corps, Stuppin made his move from Yonkers permanent, driving cross country to San Francisco. He worked as an insurance salesman, stockbroker, and investment banker. He painted at night and on the weekends, and studied at the San Francisco Art Institute. Stuppin founded six companies, five of which were successful. One of the five was the technological software giant Autodesk, now worth billions.

By the 1980s Stuppin was able to retire and devote himself full time to art, settling in Sonoma County, where he still lives. Through a fluke involving the building of a table, he met the artist and hippie commune founder Bill Wheeler. This meeting, in turn, led to the creation of what came to be known The Sonoma Four, a group of  plein-air landscape painters: Stuppin, Wheeler, Tony King, and William Morehouse.

“For two years we got together and painted the same landscapes, never looking at each others’ work. When we finally did look, we couldn’t believe how radically different they all were,” Stuppin said. “We held our first ‘fence show’ in 1992. We were very well received and the show brought us recognition.

“I convinced the others to ‘paint our way across America,’ which we did, from Yosemite to Massachusetts,” Stuppin added.

Eventually came invitations to exhibit at the Century Association in New York City and to show their work at galleries from coast to coast. Each of The Sonoma Four created a significant body of work.

Coming back East to exhibit brought Stuppin once again to the Hudson River and, in particular, to the Catskills. The latter are celebrated in several of the paintings on exhibit at the museum. In a 2016 review of “Homage to the Hudson River School” at the ACA Gallery in Manhattan, the Wall Street Journal referred to Stuppin’s paintings as “zingers” with some “being zingier” than others.

Laura Vookles, chair of the Hudson River Museum’s curatorial department, said that “Jack has a unique pattern with shapes and hues that radiate joy.”

Sometimes, but not always, according to the artist, he uses the computer to digitally enlarge a favorite plein-air painting that he then paints anew in bold, imaginatively placed colors — colors that are jam-packed on a filled canvas.

Although age has slowed him down, Stuppin said, “I paint most days. I’ve always been lucky. Painting makes me happy.”

The Hudson River Museum, 511 Warburton Ave., is open Thursday to Sunday, from noon-5 p.m. Tickets cost $8 for adults, $5 for students (with a valid ID), senior citizens 62 and older, and veterans; and $4 for youth ages 3-18. Admission is free for museum members and for children under the age of 3