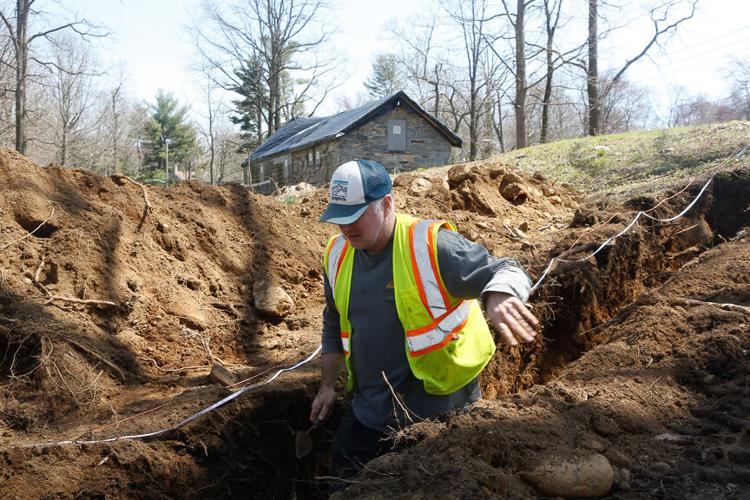 Matthew Kirk examines one of the two ditches. 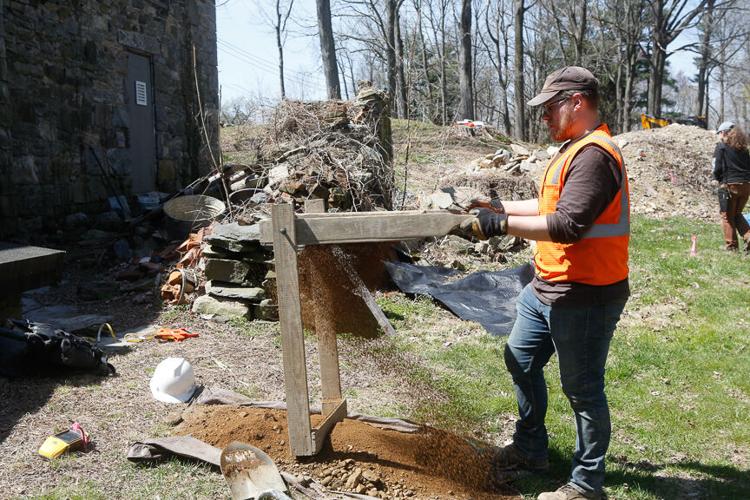 Matthew Kirk examines one of the two ditches.

Pieces of the past were unearthed last week during an archaeological excavation outside the 18th-century Odell House on Ridge Road.

The Friends of Odell House Rochambeau Headquarters funded the $8,000 effort, which was conducted by Hartgen Archeological Associates, a firm based in upstate Rensselaer, in preparation for creating a landscaping plan as part of the upcoming restoration of the site.

“To create a landscape plan, you need to know if you’re disturbing anything historic,” Friends president Susan Seal said on April 14.

During the excavation on April 13, Hartgen vice president Matthew Kirk and the team of Danielle Duguid, Cindy Herrick, Adam Gersten, and Christian Futyma unearthed assorted items: shards of pottery, such as creamware from 1760-1780 and pearlware from 1780-1820; and early 18th- to late 19th-century architectural materials, including iron hardware. Near a collapsed chimney, Friends board member Kathy Evers found an iron kitchen hook used to suspend pots in a fireplace.

The team determined that an outdoor privy was most likely of mid- to late-19th-century provenance. In addition, an icehouse is largely intact, but filled with brush, leaves, and debris to a depth of at least 3 feet. Seal noted, “The Odell family used to cut ice from the Sprain River, haul it up by oxcart, store it in the ice house. Surrounded by straw, it would keep all season.”

The archaeological team used trowels, shaker screens, and a GPS unit to conduct their work. The Town of Greenburgh had removed weeds, fallen branches, and one dead tree; one more will be taken down. Seal projects the area will be used for classes and demonstrations.

First, however, the land must be made level. The Town loaned Hartgen a small backhoe to dig two trenches, enabling them to determine whether anything of importance is buried there.

“We found the base of a child’s pottery tea set at the end of one trench, probably from the late 19th or early 20th century,” Kirk said. “Otherwise, we found no artifacts or features.”

In the summer of 1781, the Odell House was the headquarters for Jean-Baptiste Donatien de Vimeur, comte de Rochambeau, the commander of the French forces allied with Gen. George Washington’s troops, who were encamped near Ardsley High School. From their encampments, the two armies marched to Yorktown, Va., where they won the Revolutionary War.

Hartgen will return for another round of work, and then file a report about their findings.

“Our GPS unit helps us map exactly where we conducted the excavations,” Kirk said. “...We will overlay our GPS map on the survey that’s being done [by Ward Carpenter Engineers in White Plains] so we can know exactly where the excavation points will occur.”

“We did a limited-scale, one-day excavation with a small team just to get a sense of what the architectural potential of the property is,” he added. “There’s a lot more material that could be found. We’re going to do a few more tests, then we’ll do a more intensive excavation of certain parts of the property.”

For the landscaping plan, the Friends will issue a request for proposals seeking a landscape architect with experience in historic properties. Seal estimates that project will cost $25,000-$30,000, and that a grant from a private foundation, already in hand, in addition to funds from other private donors, will cover most of the cost.

“It wasn’t really about the artifacts,” Kirk concluded. “It was really about how the landscape developed. What it looked like in the 18th century is very different from what it looks like today. We’re really trying to understand those changes.”