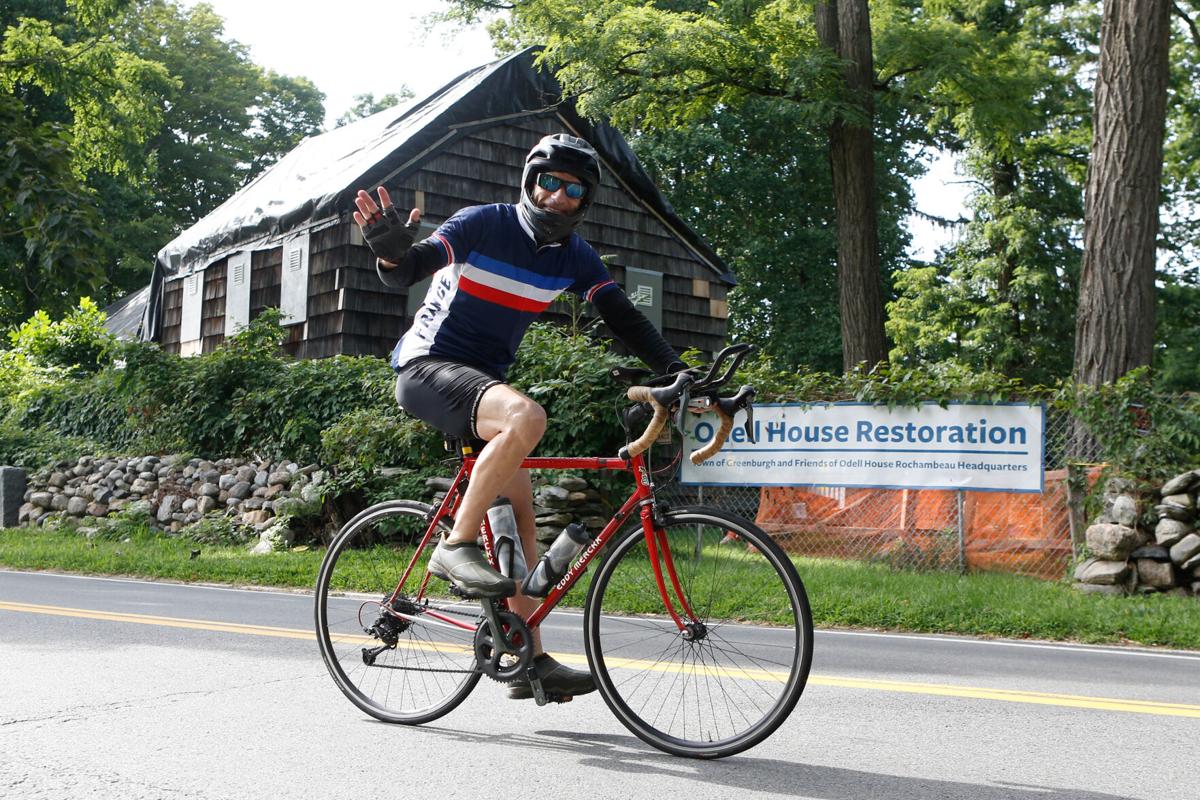 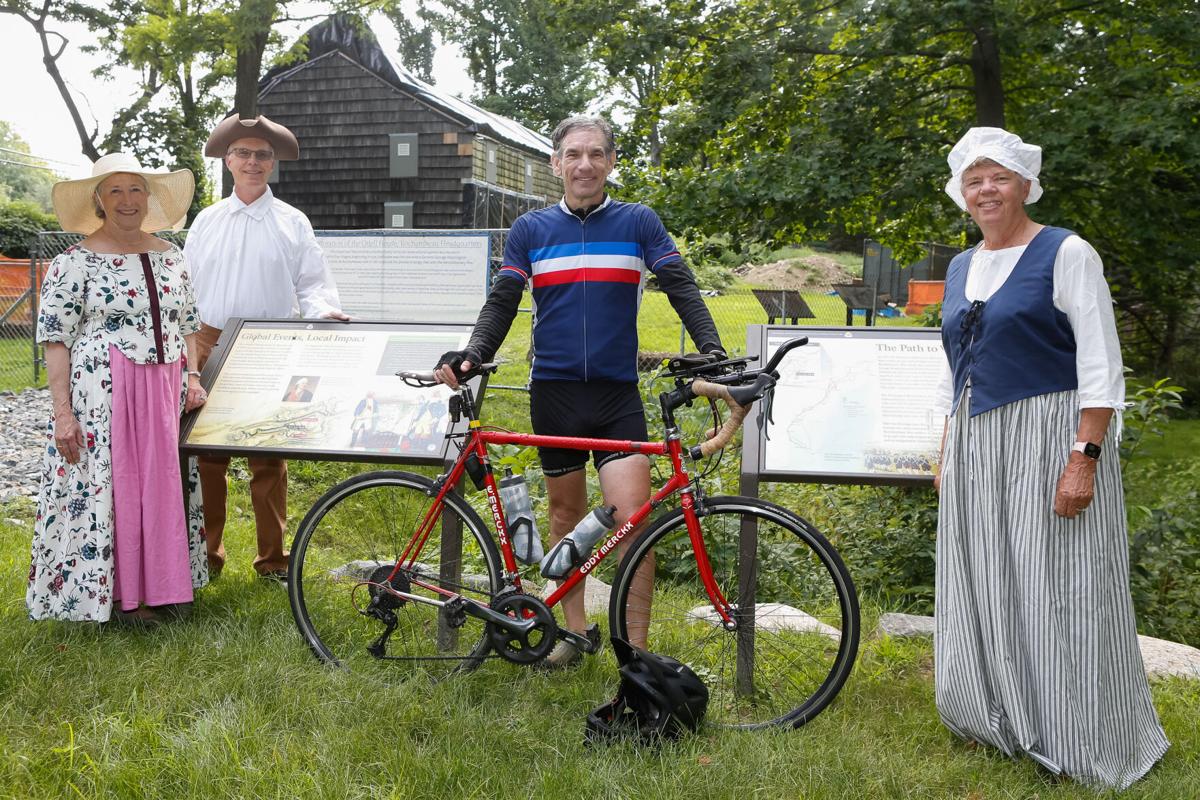 Fresh off a 70-mile trek from Waterbury, Conn., 54-year-old bicyclist Sal Lilienthal pulled up to the historic Odell House on Ridge Road in Hartsdale on Tuesday, Aug. 17, at 4 p.m.

Lilienthal was winding down the fourth day of a two-week, 795-mile solo bike-and-kayak journey organized by the nonprofit Washington-Rochambeau Revolutionary Route Association, or W3R, retracing the multi-state path taken by the French and Continental armies who joined forces in the American Revolution to defeat the British. The trip is scheduled to conclude on Aug. 28.

Lilienthal, the director of the Connecticut-based Bicycle Tour Co., as well as a “self-taught independent historian,” was met by Susan Seal, president of the Friends of Odell House Rochambeau Headquarters, and several of its members, some in period dress.

The house, which is undergoing a multi-year restoration, served as the headquarters of Comte de Rochambeau and his French forces from July 6 to Aug. 18, 1781, while Gen. George Washington’s troops were encamped in Ardsley. From Westchester, the two armies proceeded to Yorktown, Va., where they defeated the British under Lord Cornwallis, winning the war.

“The role of the French [in the Revolution] is an undertold story,” Lilienthal said, adding that Washington and his troops couldn’t have won the war without France. Equally neglected, he continued, was the importance of the “on-the-water component” of the military campaign, which Lilienthal duplicated together with the overland journey. The tour kicked off with a 12-mile kayak trip on Narraganset Bay, from Newport to Providence, R.I.

In 2019 the Washington-Rochambeau National Historic Trail organization (WARO), part of the National Park Service, put out requests for proposals for historical endeavors. Lilienthal, who lives in Kent, Conn., designed the trip with several goals in mind: calling attention to the Trail (which runs from Massachusetts to Virginia), stimulating economic development state by state with ceremonies, receptions, and re-enactments, promoting a healthy lifestyle, and spreading his passion for Early American history, especially in light of the upcoming 250th anniversary of the nation’s founding.

WARO approved Lilienthal’s trip proposal, and he was also awarded a matching grant by the National Park Service. W3R, which is not affiliated with the Park Service but collaborates on administrative functions, doled out the money and assisted with the planning. The organization intended to include multiple riders, but due to road and Covid safety concerns, the tour was restricted to Lilienthal.

“This is much bigger than me biking,” he stated. “The National Park Service is involved, W3R is involved, individual state organizations have stepped up to the plate. It’s really great to see — all of us living in the 18th century.”

Lilienthal works with his partner, Jeff Canning of Cortlandt Manor, who uses a van to transport the kayak to the water routes and the bike to the opposite shores. “The backup is incredible,” Lilienthal said. “I wouldn’t be able to do it without him.” That same day the van had broken down. The team resumed the trip with a U-Haul on Aug. 18.

W3R’s website describes the Washington-Rochambeau 2021 Bike and Kayak Tour as “One Person’s Journey to Promote a Revolutionary War National Historic Trail.” There is also a 14-day itinerary listing points of departure, destinations, departure and arrival times, and links to Mapquest and bike route GPS’s, and includes photos and historical paintings interspersed with fun facts (e.g., the French Army sailed from Newport to Providence.) The website is a veritable historical seminar, with a state-by-state Colonial-era timeline. A sample entry: “Massachusetts, 1768, October 1: British troops occupy Boston to curb perceived lawlessness.”

Lilienthal was born in New York and raised in Connecticut. He spent three years in Europe in the 1990s as a mechanic on the Motorola Cycling Team — of which Lance Armstrong was a member — and later joined the U.S. National Team. In 1998, he led a bike tour near the section of the Delaware River crossed by Washington and his men in 1776. “It looked nothing like the [iconic] painting,” he recalled. This piqued his interest in Revolutionary history.

“I had thought it was [nothing more than] a bunch of guys in white wigs in Philadelphia signing papers declaring independence,” he confessed. “The more I researched the more fascinating the story was to me.” So fascinating, in fact, that in 2014 Lilienthal published “Revolutionary Battles: Experience America’s Roads to Independence,” available on Amazon. “The trip complements the book,” he said. In December, he will teach a course entitled “Revolutionary Spies and a Traitor” at the Frederick Gunn School in Washington, Conn., where he also coaches the crew team and organizes regattas.

“I hope that Sal’s tour will raise awareness of the important role the French played in our victorious end to the Revolutionary War,” Seal said. She also noted that the $600,000 matching grant the Town of Greenburgh received from New York State for the restoration only covers repairs to the house. The Friends continue to accept donations for addition work. For more information, visit odellrochambeau.org.