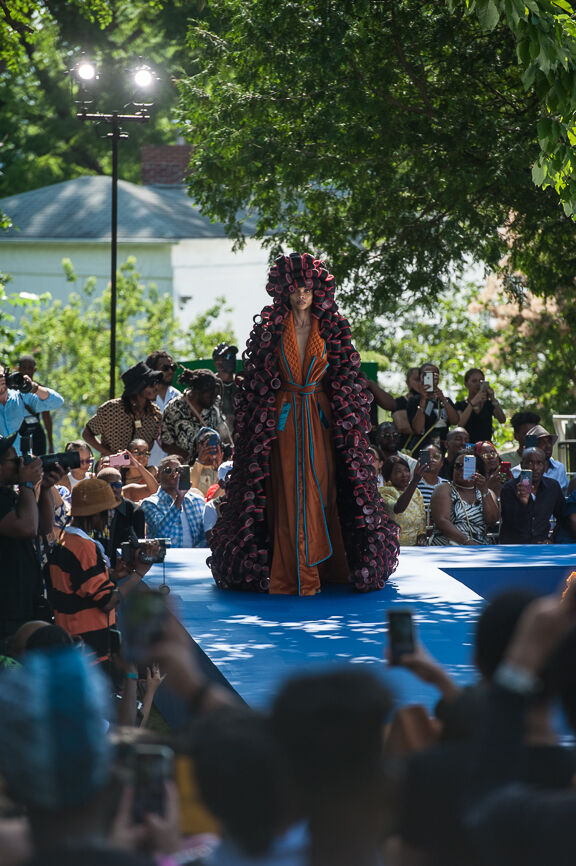 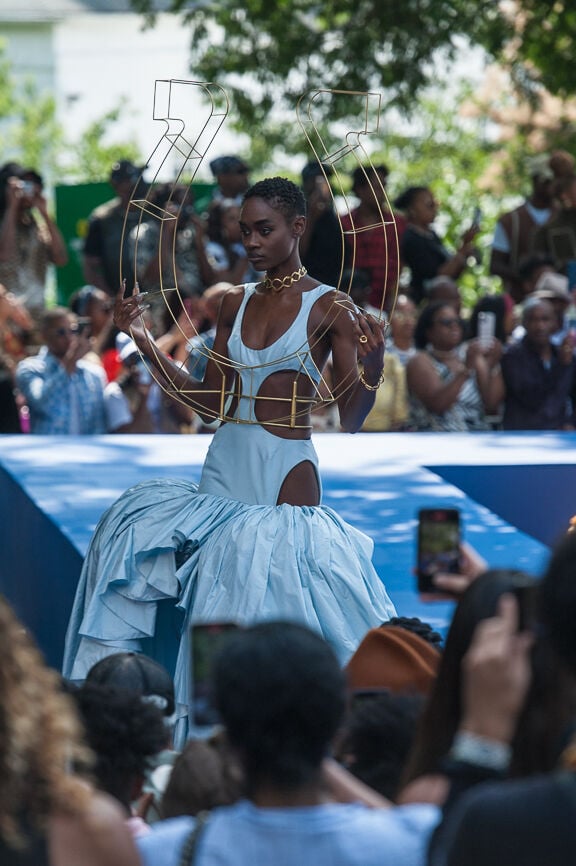 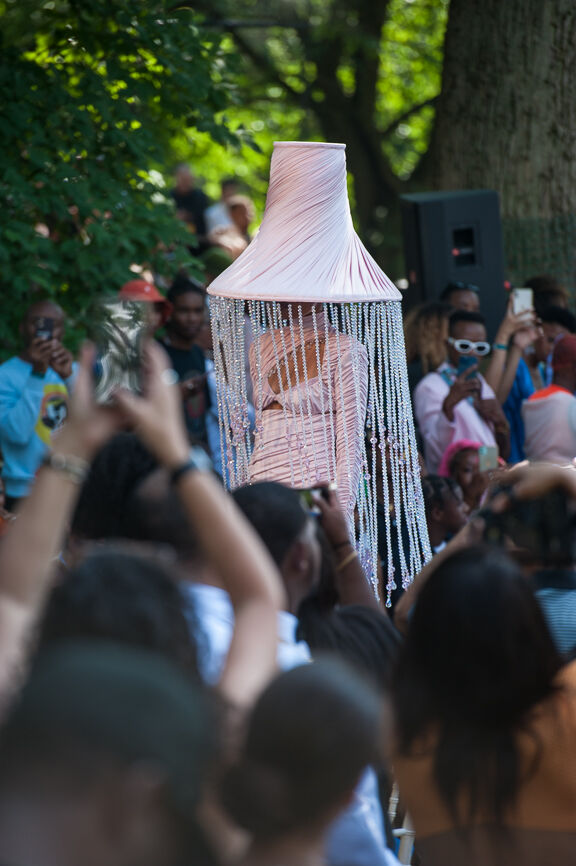 Outfits in the shape of a refrigerator, a bottle cap, a peanut butter jar, and more were among the attractions as the international fashion industry shined a spotlight on North Broadway on Saturday, July 10.

The occasion was a couture show by designer Kerby Jean-Raymond, founder of the label Pyer Moss, on the front lawn of Villa Lewaro, the 34-room mansion that Madam C.J. Walker, the country’s first female self-made millionaire, had built in 1918 with money she made selling beauty products for Black women.

The show was the first by a Black American designer during Haute Couture Week, a series of events organized by the Chambre Syndicale de la Haute Couture, the governing body of the French fashion industry founded in 1868.

The show had been scheduled for Thursday, July 8, but was postponed after Tropical Storm Elsa blew into Irvington. The weather cooperated two days later. In between, Jean-Raymond had made a limited number of tickets available to the general public.

Jean-Raymond is interested in empowerment for the Black community. To warm up the crowd, Elaine Brown, former chair of the Black Panther Party, strode the runway to deliver an energetic monologue that echoed the Black Power demonstrations of the 1960s and ‘70s as well as the current Black Lives Matter movement.

Rapper 22Gz, a native of the Flatbush section of Brooklyn, as is Jean-Raymond, performed on a multi-tiered stage surrounded by the runway. He was accompanied by drummers, string musicians, and white-tuxedoed dancers who gradually shed pieces of clothing until they were wearing nothing but their white pants.

Titled “Wat U Iz,” the show consisted of 25 ensembles that were all tributes to everyday items made by Black inventors.

In a YouTube video filmed at the event, Jean-Raymond says, “We decided to highlight inventions by Black people and show them in a nontraditional way with garment construction mixed with fabrication, mixed with sculpture. It wasn’t just couture in the traditional sense where we’re just sewing up garments. It was like, welding involved, and fiberglass molding... everything is like severely over-engineered.”

He explained that the collection had been in development since last year, when he rented a facility in Los Angeles and brought in costume designers and fabricators from the movie industry to help engineer the garments, which were shipped to New York for finishing touches.

For example, a model wore an outfit shaped like a peanut butter jar, an homage to George Washington Carver, who made hundreds of products from the peanut plant. Other outfits included a folding chair, an invention of John Purdy, and a dress shaped like a three-light traffic signal, invented by Garrett Morgan, the first Black person in Cleveland, Ohio, to own a car.

A particularly ambitious ensemble consisted of a giant fabric hand, worn as a coat and holding a mop, the invention of Thomas W. Stewart. There was also a glittering gold mini-dress decorated with keys and padlocks, as well as models who wore replicas of a fire escape and a cellphone.

Jean-Raymond told Vogue magazine that Madame C.J. Walker inspired the showstopper of the collection — a trailing, hooded cape made of hundreds of hair rollers.

Like Walker, whose parents were born into slavery, Jean-Raymond is a self-made success story. His mother died when he was young. When his father was hospitalized, and there was no money coming in, he lied about his age and was hired, at age 13 to work at a sneaker store in Brooklyn. The following year, he was accepted into a New York City high school for the fashion trades. He hoped to study sneaker design, but the course was canceled, so he shifted to fashion and pattern making. Jean-Raymond’s talent earned him an internship with the dress designer Kay Unger, who mentored the 14-year-old. He went on to attend Hofstra University and to start his own label in 2013.

In addition to outfits about race and society, Jean-Raymond designs wearable clothing for men and women such as jackets, hoodies, sweatshirts, T-shirts, leggings, shorts, track pants, dresses, and gowns. For Reebok, he designed elevated versions of pants, skirts, blazers, shirts, and socks.

The attendees included Villa Lewaro’s current owner, Richelieu Dennis, who oversees the New Voices Foundation, a nonprofit that invests in women entrepreneurs, especially women of color. Dennis bought the mansion, which is listed in the National Register of Historic Places, from Harold and Helena Doley in 2018.

Like Madam Walker, Dennis earned his fortune formulating products for Black women. He was the founder and CEO of Sundial Brands, the maker of Shea Moisture. Sundial later bought the rights to the Madam C.J. Walker brand name, under which Dennis started a separate line of beauty products. Dennis sold Sundial to Unilever in 2017, and in 2018 he purchased Essence Communications from Time, Inc., returning it to Black ownership.