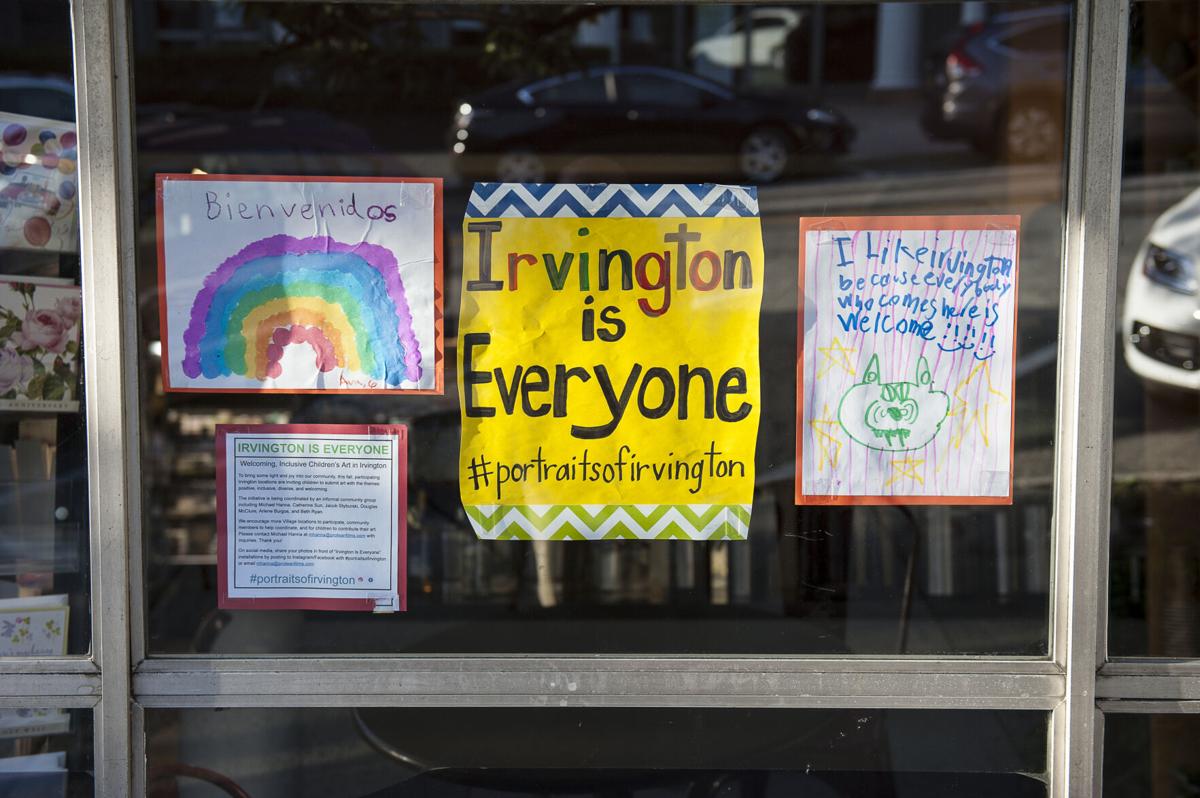 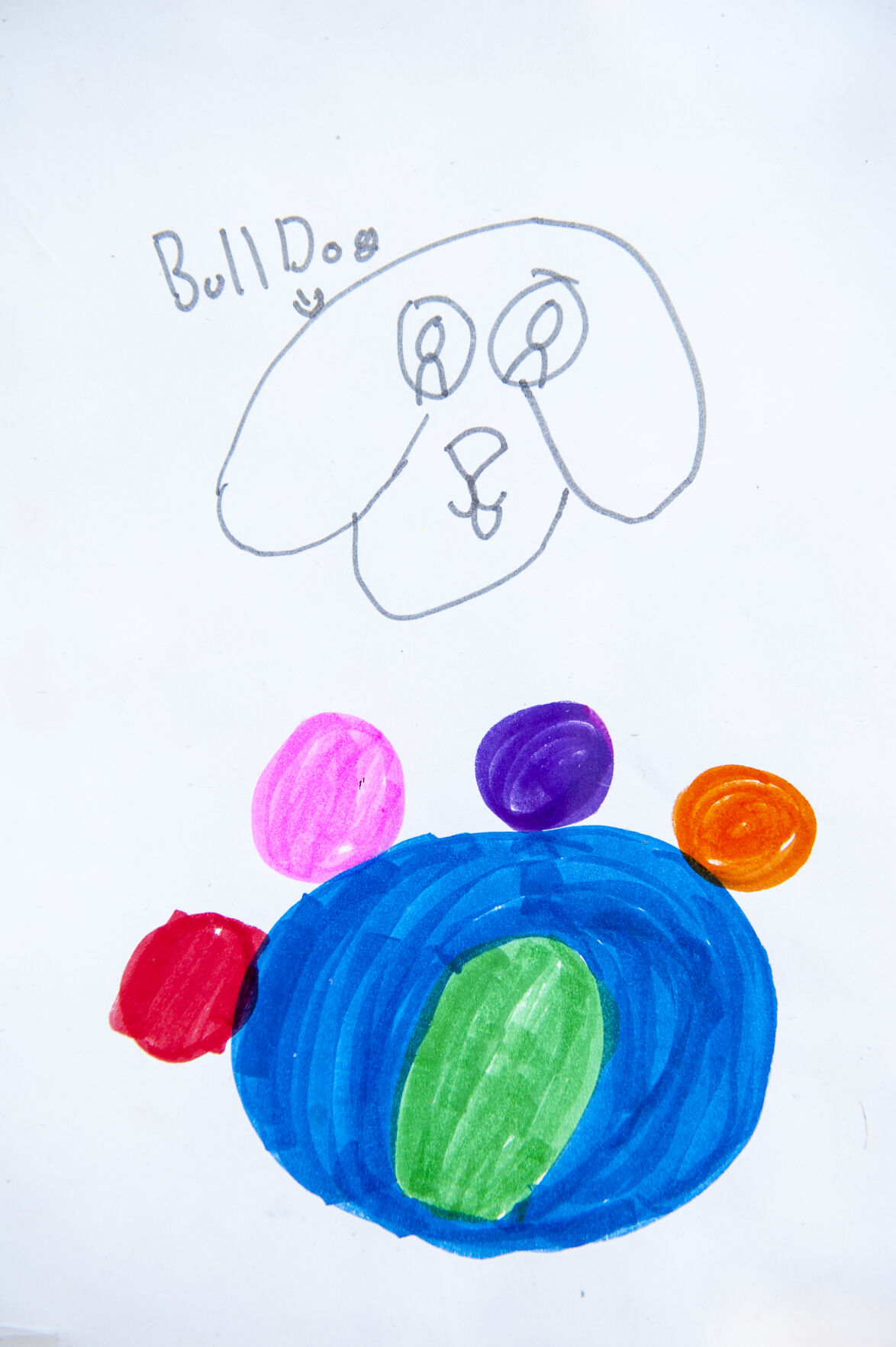 Visitors to downtown Irvington will see a streetscape that’s a little brighter this month, thanks to a growing number of pop-up displays of children’s artwork in the windows of local merchants.

“I talked about this initially with Jacob and Catherine at Revenge, and the project sort of grew,” Hanna told the Enterprise on Sept. 7. “Our small businesses are doing their best in this pandemic. This brings together many things — our small businesses, our families. It’s just a little bit about coming back from summer, and school starting, and wanting to create something that was positive. And definitely, the community is having conversations around being welcoming and featuring our diversity and our inclusiveness.”

Hanna said his group wanted the displays to “grow organically.”

The organizers put the word out over social media the first week of September, asking for kids’ artwork with welcoming, inclusive messaging. A week later, almost 30 kids had complied. “More is coming in every day,” he explained. “As one family does it, they mention it to another family.”

By the end of this week, displays should also be in place at Brrzaar, Poppy Studio, Squint Optometry, and Dr. Mac. “We invite other businesses to reach out to us, and we’ll be reaching out to them,” Hanna said. “It’s just been wonderful for us to see each day the ability to put it up in another window. It’s an opportunity for families to come and see their own art and other children’s art.”

Social media accounts under the name Portraits of Irvington have been established on Facebook and Instagram. Villagers are encouraged to post pictures of themselves standing next to one of the storefront displays.

The artists range in age from about 3 to 14, and their messages are clear. “I like Irvington because everybody who comes here is welcome,” read the caption on one picture. Friends with different skin colors are featured on many illustrations, including one depicting hands of four skin colors reaching toward a heart with the words “Better Together.” A simple picture of the Hudson River carries the words “Irvington Loves Everyone — We Love You!”

Main Street School plans to kick off the new academic year with a complementary project coordinated by art teacher Nina Rossi.  The artworks, which students will create during the all-remote first two weeks of school, will be on view on the fence in front of the school and inside the building.

If Irvington, as a community, has only recently begun to talk actively and publicly about issues of race, its school district is ahead of the curve.

Principal Joyce Chapnick told the Enterprise on Sept. 7 that the Irvington is Everyone project aligned closely with “the work we do at MSS around our many identities. Our approach at MSS has been to consider how we are global citizens within and beyond the walls of our school. Through the books that we read, the discussions that we have, and the projects that we engage in, we ask students to consider a variety of perspectives of people from all over the world.”

Last year MSS partnered with Welcoming Schools, a project of the Human Rights Campaign Foundation. “Through this work we began in-depth conversations about our many identities, and then engaged our students in explicit learning related to race, ethnicity, religion, and gender, to name a few,” Chapnick explained. “This village project is a wonderful opportunity for our fifth-grade students to bridge the many identities conversations from last year into this year, and an introduction to the conversation for our fourth-graders.”

Rossi said this learning would continue in an art context, considering the artist’s role in the community. “We will think about how an artist can visually interpret our most important ideals to help us see, actually see, what we value,” she told the Enterprise. “Variety and unity are essential principles of design. As artists we will use these principles to infuse our work with a message that speaks to the power of our differences to bring us together.”

The year 2020 has seen Irvington groping for a clearer vision of itself as a welcoming community, while coming to terms with a heritage that included slave-owning tenant farmers in Colonial times, and its current challenges as a school system of predominantly while students and staff. The question of whether to open residents-only Matthiessen Park to the general public, after the park’s renovation is completed this year, has not been resolved. The art project’s organizers hope to offer a positive counterpoint to these issues.

Interestingly enough, to the children who are making artwork for the store windows, the answers are simple.