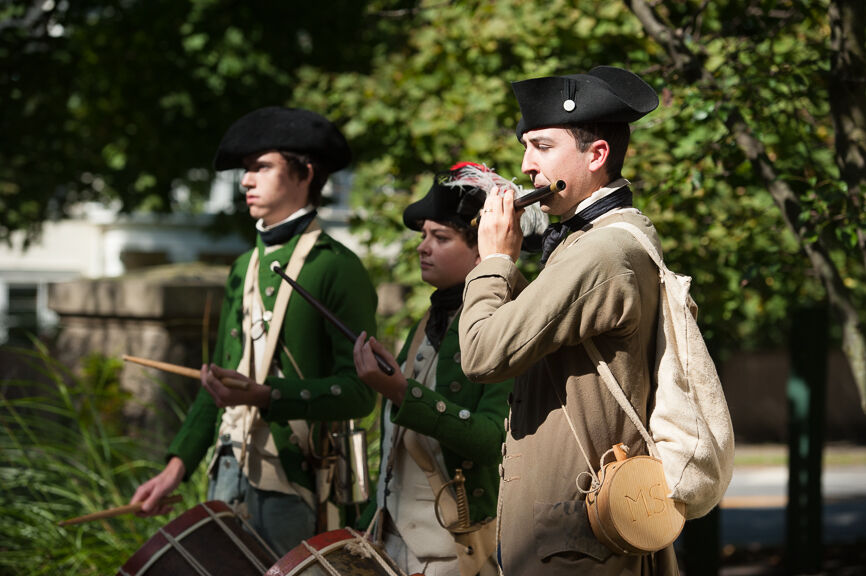 The Hearts of Oak fife and drum trio of Garrett Miller, Brin Dennis, and Matthew Skic perform on Oct. 2. 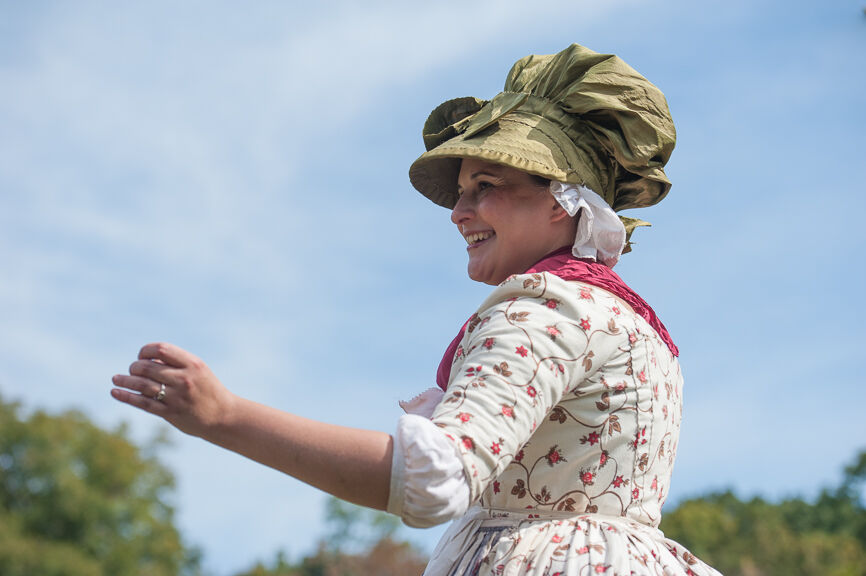 Eliza Vincz-Lichack sings “Here’s to the Maiden of Bashful Fifteen,” accompanied by her husband, Erik Lichack, on harpsichord on Oct. 2.

The Hearts of Oak fife and drum trio of Garrett Miller, Brin Dennis, and Matthew Skic perform on Oct. 2.

Eliza Vincz-Lichack sings “Here’s to the Maiden of Bashful Fifteen,” accompanied by her husband, Erik Lichack, on harpsichord on Oct. 2.

Hastings residents, dignitaries, and a costumed fife and drum trio turned out at Wagner Plaza on Sept. 30 to celebrate the dedication of “Revolutionary Walk,” where six interpretive panels tell the story of the Battle of Edgar’s Lane. Near that site, on Sept. 30, 1778, Continental soldiers helped by local informants ambushed a troop of Hessian mercenaries working for the Redcoats, killing all the enemy cavalry and taking their commander prisoner.

The dedication was part of the run-up to the 250th anniversary, or semiquincentennial, celebrations planned across the U.S. in 2026.

Mayor Nicola Armacost called the parklet “a stunning, beautiful new gateway into our village... it will be a treasured resource for parents and teachers as they explain to their children what happened here in Hastings almost 250 years ago.”

The dedication of the plaza was five years in the making by a volunteer group, Revolutionary Hastings.

Longtime resident Fred Charles wanted to call attention to Hastings’ role in the American War of Independence. A multi-talented committee formed around him, including vice-chair Andrew Bordwin and Niles Jaeger, a trustee of the Hastings Historical Society. Other residents with a special interest in history or a particular skill set joined them as the group gained support and funding. Revolutionary Hastings has had financial support from entities such as the Village of Hastings, Westchester County, the Scarsdale Historical Society, and the Diane Dobbs Allen Charitable Trust for Hastings-on-Hudson.

Painter Don Troiani gave the committee permission to reproduce his painting of the battle, “Ambush at Westchester,” in the plaza, and cartographer Robert Romagnoli (who designed the map of the Old Croton Aqueduct Trail) produced an illustrated map of the area to accompany historical illustrations by John Wright and graphic design by Laura Smyth.

Area historians were also recruited, including Erik Weiselberg, Ph.D., a history teacher at Irvington High School who is also principal historian for Revolutionary Westchester 250. Weiselberg produced an 82-page report on the battle. “His writings are the spine of the project,” Charles said.

Natalie Barry, president of the Hastings Historical Society, said she first met Fred Charles when he came into the society’s headquarters at Observatory Cottage to talk about staging a re-enactment of the battle. She thought it would be a great, family-friendly event. “Little did we know then that the one-day re-enactment would morph into a custom painting of the battle, then a couple of historic signs about the battle, and then a total revamp of Wagner Plaza with new landscaping, walkways, and six beautiful interpretive signs.”

Kehoe read some remarks from Weiselberg, who was unable to attend the ceremony. “Westchester was once a dangerous no-man’s-land in time of war,” he wrote, noting that the colonials’ local knowledge and the terrain of the area worked in their favor. “We have placed the Battle of Edgar’s Lane into a larger narrative of the 1778 campaign and the long years of war here in Westchester County.”

Benny Bulfamente, an area landscape construction contractor, provided the construction work for the plaza at cost. But because the plaza’s bluestone pavers were delayed in transit, the installation of the pavers, seating, gravel areas, and planted landscape beds designed by Susan Jainchill could not be completed by Sept. 30.

The dedication of Revolutionary Walk was a prelude to the weekend’s other commemorative events, including guided lantern tours on Oct. 1 from Warburton Avenue to Revolutionary Walk, and a day-long family fun festival on Oct. 2 at Zinsser Park. Charles’ wife, Eileen, organized the festival.

“We wanted to represent all the people who lived here during that time, and before that time,” she said on Oct 4.

That 6-hour celebration included a Continental encampment, complete with Revolutionary War re-enactors, and a pop-up version of the Peter Post Tavern built by Steve Pucillo of Hastings. In the original Post Tavern, the plot to trick the mercenaries unfolded.

In addition, there were performances by historical balladeer Linda Russell, master storyteller Jonathan Kruk, and the Hearts of Oak Militia. There was also blacksmithing, butter churning, cider pressing, open-hearth cooking, weaving, wreath-making, and writing with a quill pen and ink. Plus Barry Keegan demonstrated the technologies of Hastings’ first residents, the Lenape.

“It really brought to life the period and the history,” Eileen Charles said. “We were tenant farmers; we weren’t a high-class society. This was not the fancy Westchester it is today.”