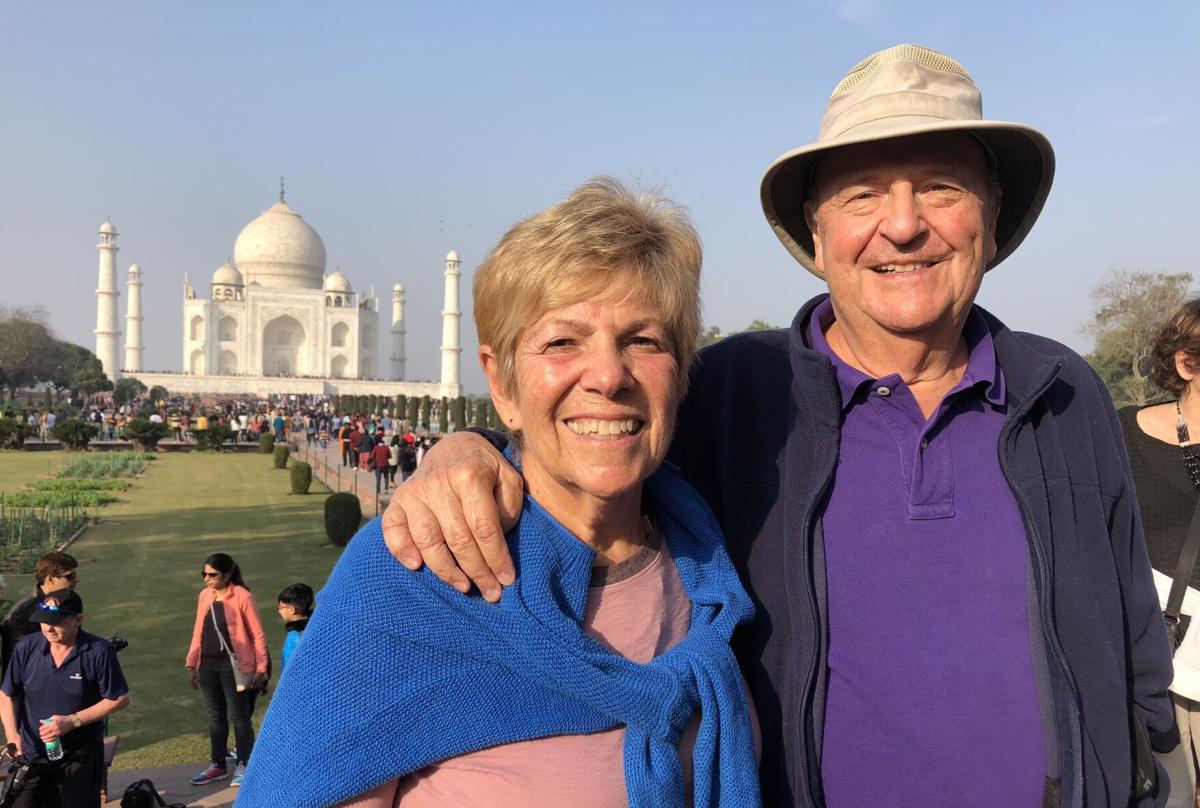 Iris and Howard Burkat outside the Taj Mahal

A shop in the City of Kochi

A sign for a synagogue in the City of Kochi 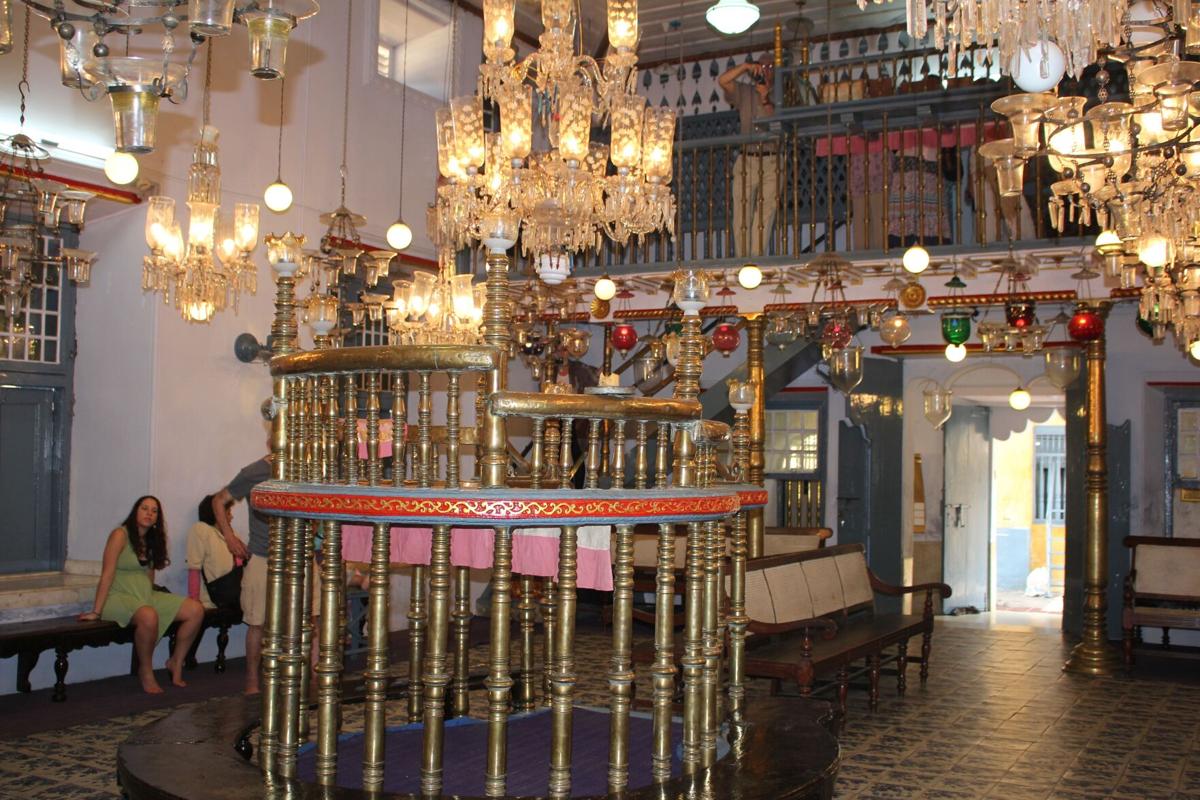 A synagogue in the City of Kochi

Iris and Howard Burkat outside the Taj Mahal

A shop in the City of Kochi

A sign for a synagogue in the City of Kochi

A synagogue in the City of Kochi

Iris Burkat first met her husband, Howard, on a Greyhound bus, when both were heading back to school in Philadelphia in the 1960s. Travel has been a major motif of their union ever since.

The Hastings couple, who until 2009 were longtime residents of Scarsdale, have been married since 1965 and have visited more than 80 countries over the years. Iris’ career included personal finance and travel-related services for financial sector companies such as American Express, and her work entailed lots of international destinations. Howard also relished business trips as a marketing and communications executive and later as a communications consultant.

Their joint explorations of foreign lands began the year they were married, with a two-week trip to Venezuela. They took lengthy trips every year thereafter, even when their careers were at their peak. She remembers those days fondly.

“Nobody had cellphones, and they couldn’t find us,” she said on April 9.

The Burkats’ wanderlust even inspired a new business venture. In 2014, the couple, who were then in their 70s, decided to combine their passion for travel and their interest in Jewish history by offering tours of lesser-known centers of Jewish life, such as India, through their travel consulting company, Burkat Global.

Iris Burkat will talk about the enduring Jewish culture in India at a presentation next Friday, April 23,on Zoom at 12:15 p.m., sponsored by the Westchester Reform Temple in Scarsdale. To access the link, visit the “Upcoming Events” section of www.wrtemple.org.

The seed of the idea for the Burkats’ “3,000 Years of Jews in India” tour was planted during a visit to Israel. “When our son was 13, we went on a family trip with Westchester Reform, our synagogue, to Israel,” she recalled. “Our rabbi took us to the Israel Museum in Jerusalem, and there was a synagogue they had taken from South India and set it up in the museum. I was fascinated by it.”

She wanted to see more Indian synagogues, but to see them where they were built, in India. By 2012, she and her husband had visited South India to do on-location research on the history of the Jews there. They pinpointed sites of historic and cultural importance, beginning with the Jews who first arrived as spice traders in Cochin 3,000 years ago, and continuing on to a beach near Mumbai, where Jews were shipwrecked 1,000 years later.

“We uncovered information that got us deeper and deeper into the culture,” she said. “Three thousand years is a long time. There’s a lot to learn and a lot to debate. I’ve had a lot of help from scholars and rabbis.”

The tour takes visitors to centuries-old synagogues and includes opportunities to sample the subcontinent’s unique Jewish cuisine. “You will always find dishes with wonderful spices, and mostly vegetables and fish,” she said. “You have to love spices to go to India.” She noted that in Cochin, which is located in South India, there’s even an eatery called the “Menorah Restaurant.”

On the tour, visitors cover about 2,000 miles, by air and overland travel, and also take trips to important Indian tourist sites, such as the Taj Mahal.

With the success of their Indian Jewish tours, the Burkats decided to branch out to another country with a vibrant Jewish history: South Africa.

“Howard always wanted to go to South Africa since he was a little boy, but it wasn’t politically appropriate during apartheid,” Iris Burkat said. They were finally able to go in 2004, and returned several times after that. They followed the advice of their rabbi, who told them that wherever they traveled, they should get to know members of the Jewish community.

In fact, they found the country so appealing that they rented out their co-op in Hastings for a year, and from 2015-16 they rented a house in a small town outside of Cape Town, where they became immersed in the local culture.

They spent another six weeks in South Africa in February and March 2020. They had just launched the advertising for their Jewish history-oriented tour of South Africa when the coronavirus pandemic put all travel plans on hold. The Burkats returned to New York in time to encounter the lockdown; the farthest they have traveled for the past year has been to Vermont. They are optimistic that the tours will resume next year, if it’s safe to travel.

The Burkats have been planning an itinerary that highlights South Africa’s most dramatic destinations, from cities and small townships to safari parks and spectacular beaches. For those interested in Jewish history and culture, touring South Africa offers perspectives on the role Jewish people played as traders, as participants in South African mining and other industries, and most recently as allies in the fight against apartheid.

It’s also a place Burkat considers a terrific bargain for snowbirds. “If you’re bored with Florida, South Africa is a more beautiful, more affordable place to spend the winter,” she said. “When we spent a year there, it cost us a quarter of what we spend here.”

Overviews of both the India and South Africa tours can be found at burkatglobal.com.