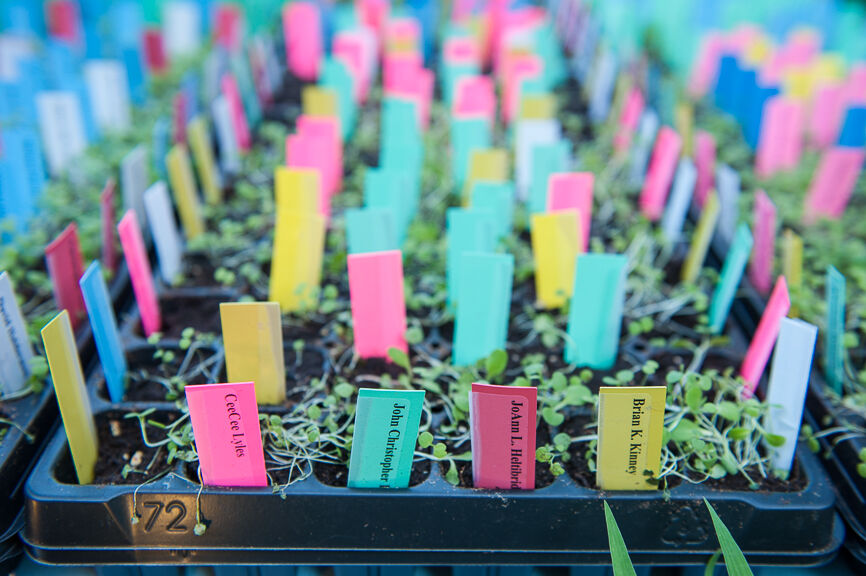 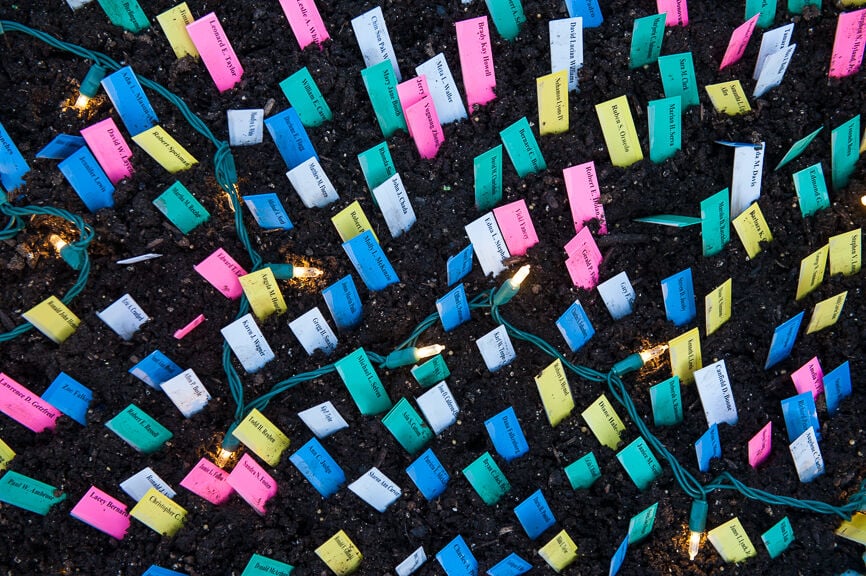 Almost 3,000 forget-me-not seedlings were arranged on the sloping lawn in front of VFW Post 200 on Warburton Avenue earlier this week. Each plant honors a victim of the terrorist attacks on Sept. 11, 2001.

The plants were placed in the shape of the Twin Towers of the World Trade Center. Each plant includes a tag with a name of a victim. In between the towers, name tags fill a heart that honors those lost at the Pentagon and on hijacked United Airlines Flight #93, which crashed in Pennsylvania. The six victims of the 1993 attack on the North Tower of the World Trade Center are also included.

The tribute is the work of Lisa O’Reilly and her fellow staff members at the Hastings Parks and Recreation Department, where she works as a recreation assistant. She has been with the department for 25 years, 18 of them as a full-time employee.

“I knew we had to do something for the 20th anniversary of 9/11 and I wanted it to be something that would let us remember each one of the people we lost on that day,” O’Reilly said.

As with the annual Memorial Day Parade and other events she plans on behalf of the rec department, O’Reilly set out to find an appropriate theme for the anniversary.

“I wanted it to be a living, breathing memorial and it occurred to me that a remembrance flower like a forget-me-not would be a great tribute and one that would also achieve my goal,” O’Reilly said. “So I visited a gardener friend and he educated me on how to take care of almost 3,000 plants. Basically, they have been in residence here at the community center since July.”

O’Reilly chose purple forget-me-nots [myosotis scorpioides] because the hue seemed the most appropriate for the memorial. In addition, she had the plywood planks that form the Twin Towers and heart painted blue in memory of “how perfectly blue and clear that September sky was 20 years ago,” she said.

In the midst of caring for the plants, O’Reilly visited the 9/11 Memorial and Museum in downtown Manhattan for the first time.

“It was an unbelievable experience,” she shared. “And the museum is so well done, so personalized in the way they display someone’s set of keys, or a shoe.”

O’Reilly is drawn to days of remembrance — such as Memorial Day and Veterans Day — because she comes from a family of veterans. Her father, Lenny Glosser, served in the U.S. Navy. Her brothers, Johnny and Lenny, were both Marines who saw combat in Vietnam. Johnny Glosser died there.

“We should continue to talk about these dates and what they mean,” O’Reilly said. “As with 9/11, yes, it did happen. We need to remember that it did — we should remember the people we lost.”

The forget-me-not memorial will remain in place through Monday, Sept. 13. The plants will return to the James Harmon Community Center on Main Street on Sept. 14. There they will be available to anyone who wants to bring one or more home.

Signs in the storefront at 555 Warburton will provide information on how to obtain a plant. Information will also be available on the Village of Hastings website (hastingsgov.org). The names of the victims are also printed on sheets of paper placed in the windows of 555 Warburton.

“It would be wonderful if the person who takes a forget-me-not home looks at the name tag, and then tries to find out something about that person,” O’Reilly said. “The 9/11 Memorial and Museum website is an excellent source of information and the only source I used as I put this remembrance together.”