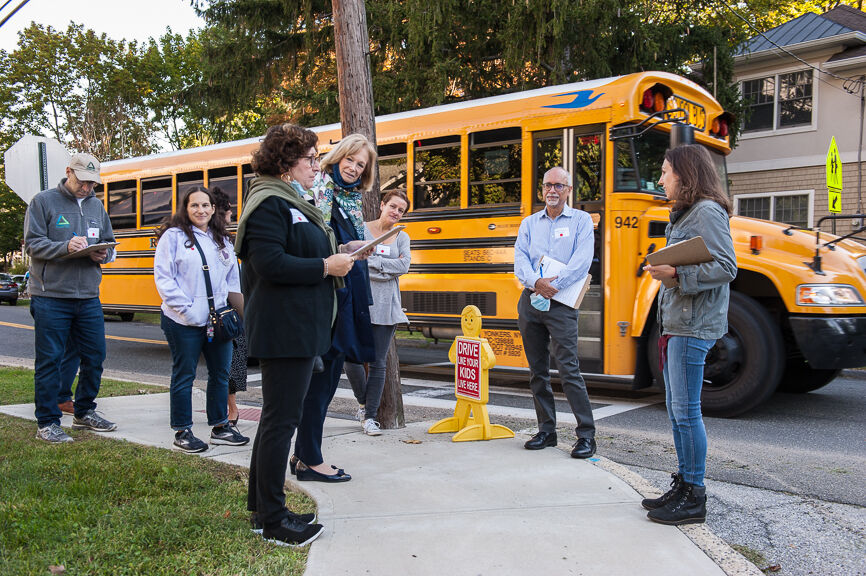 County Legislator MaryJane Shimsky (center) talks as the group led by Becky Pitts (right) stops at the intersection of Bellewood and Walgrove avenues. 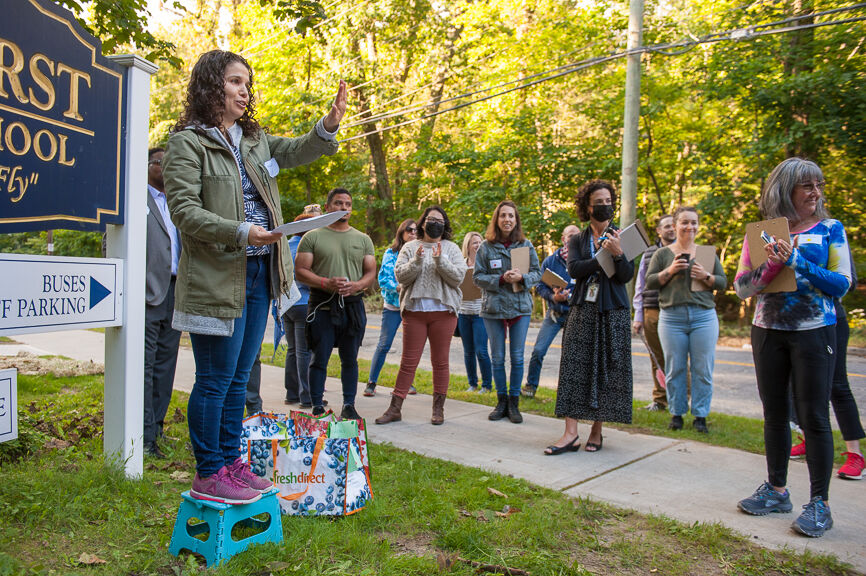 County Legislator MaryJane Shimsky (center) talks as the group led by Becky Pitts (right) stops at the intersection of Bellewood and Walgrove avenues.

Stakeholders hit the streets on the morning of Sept. 30 for the first Community Walking Tour sponsored by Our Streets Dobbs Ferry, a volunteer organization formed to promote safety and walkability in the village.

Approximately 35 participants — including parents, government officials, and school district leaders — put themselves in the shoes of children who travel to and from Springhurst Elementary School on foot, by bicycle, or using mobility devices.

“Our Streets is thrilled with the turnout,” event organizer Brianne Lucyk said on Oct. 1. “The participants were engaged and gave thoughtful comments and insights on how to make our village safer for everyone. We are grateful to everyone for taking time out of their day to attend.”

Divided into groups — led by Becky Pitts (red team), Jessica Pflueger (yellow team), and Liz Mendez (green team) — participants walked one of three routes to the school, using a checklist to note their observations about the condition or lack of sidewalks, crosswalks, signage, and traffic calming devices; intersections and street crossings; and driver behavior.

To promote the event, the Westchester Youth Congress, a high school student-led organization that encourages activism, made a short video about an experiential walk to the school (bit.ly/3Fd3xDU).

“Our Streets is heartened by the turnout at the county level,” Lucyk noted.

The intersection of Ashford and Storm Street elicited the most dismay from the red team. The consensus was that the wide roadway encourages drivers to speed, though the posted limit is 25 mph. Police enforcement wasn’t deemed practical. However, it was noted that when a crossing guard is stationed at the spot, with cones to narrow the road, traffic is forced to slow down and vehicles are prevented from passing.

The red team thought that narrowing the road to one lane in each direction, installing a pedestrian island, or using speed bumps or speed cameras was a more sustainable solution than employing crossing guards for more hours. They thought the same solution could apply to the crossing at Maple Street and Broadway.

“The route that I walked does present some challenges for pedestrians,” Rossillo acknowledged afterward. “We have been working on securing funding to improve the sidewalks and streets. We do have a schedule of streets and sidewalks that will be improved. In addition, we will be working with homeowners to make them aware of the importance of making their property safer and more walkable.”

He also had a positive observation: “We did see groups of kids walking to school as well as drivers dropping their kids off. Everyone seemed to be obeying the traffic laws.”

The team’s major concerns were the dangers of children walking or biking on wide roads that had no crosswalks and sidewalks, and those with confusing parking and other signage. Again, narrowing roads with paint, planters, poles, or other obstacles, and using speed bumps and speed cameras rather than expecting police to be there 24/7 were discussed. People wanted crosswalks added and improved, but building sidewalks was the most favored solution. However, the group acknowledged that budget constraints and possible resistance from residents had to be considered.

Where children walk into the village on one side of Walgrove Avenue, there is no sidewalk; to get to the sidewalk on the other side, they must cross a busy road that has no crosswalk. Speeding on upper Walgrove Avenue is an issue, as are sightlines across the bus circle. Also, part of D’Assern Drive has no sidewalks. If children walk through the woods instead of on the road, they must pass through a hole in a fence to get to school property. Winter weather makes the path difficult or dangerous to navigate.

The green team felt that speed bumps on upper Walgrove could slow drivers; a gate between the Springhurst and CV properties would obviate the need to walk through a fence; adding gravel to the path would make it walkable, and improving the crosswalk at the bus circle could be done with signage and the removal of a parking spot that blocks a driver’s perspective.

Our Streets plans to share the results of the Community Walk with the village board, school board, and PTSA. “We hope our forthcoming reports and analysis will offer a real-time snapshot of current challenges and opportunities for improvement,” Lucyk stated. “These challenges are not unique to Dobbs Ferry. In collaboration with local youth [the Westchester Youth Congress], we plan on sharing our experiences, successes, and challenges around organizing a ‘walk audit,’ with the hopes that others will be inspired to host similar events in their own neighborhoods.

“Often these events are led by consultants and professionals,” she added, “but it’s central to our mission that citizens are best equipped to engage with their community and public space — [they’re] experts in their own right.”