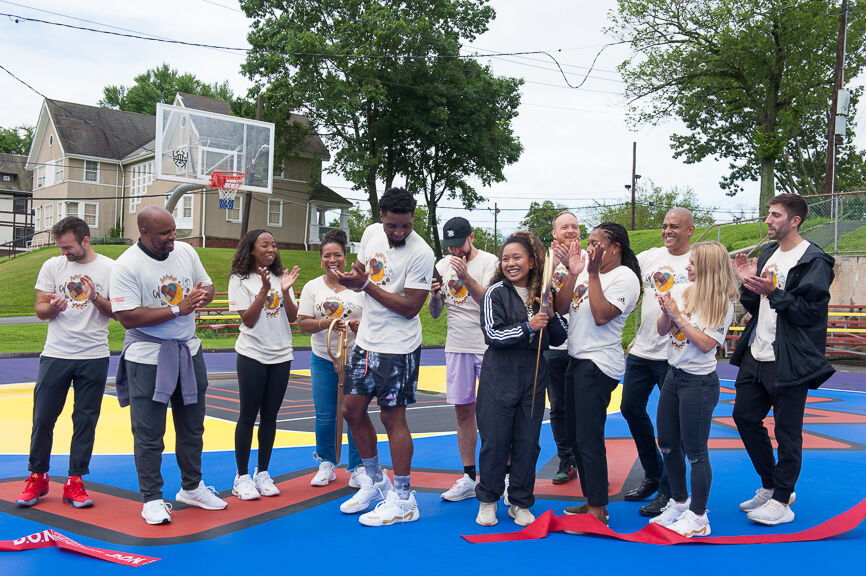 Donovan Mitchell, his mother Nicole, his sister Jordan, and members of CV’s staff applaud after the ribbon-cutting for the court outside the Lanza Activities Center. 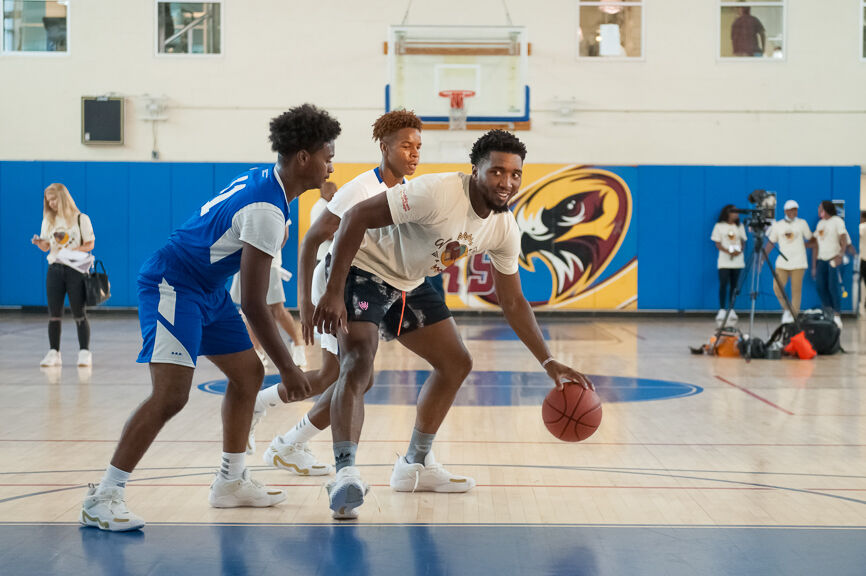 Mitchell plays basketball with members of CV’s varsity team inside the gym at the Lanza Activities Center. 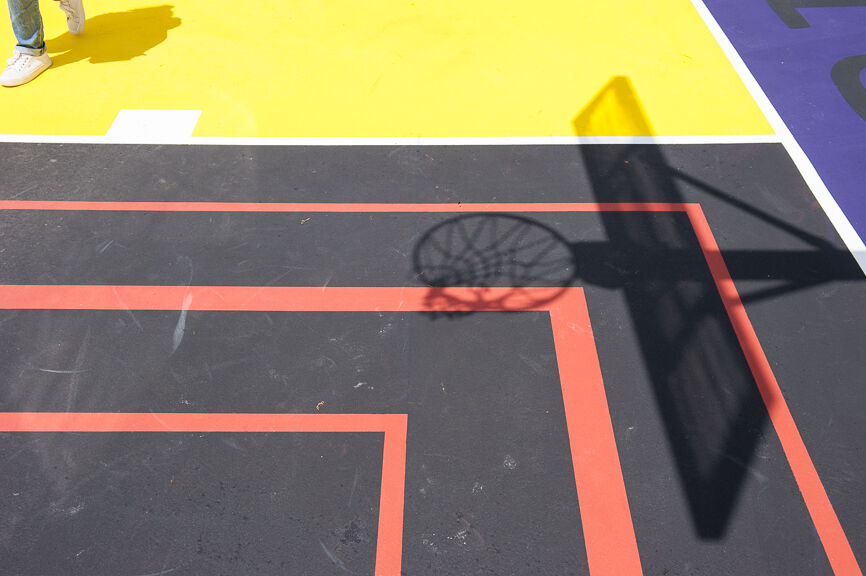 Part of the new court outside the Lanza Activities Center

Donovan Mitchell, his mother Nicole, his sister Jordan, and members of CV’s staff applaud after the ribbon-cutting for the court outside the Lanza Activities Center.

Mitchell plays basketball with members of CV’s varsity team inside the gym at the Lanza Activities Center.

Part of the new court outside the Lanza Activities Center

The Children’s Village held a ribbon-cutting with two-time NBA all-star Donovan Mitchell on Friday, July 9. The Utah Jazz shooting guard funded the restoration of three outdoor basketball courts at the residential treatment facility for children in honor of his grandmother, a former social worker at CV who passed away in September 2020, at age 77.

Adidas and Mitchell’s nonprofit organization, Spidacares, funded the restoration with support from Project Backboard, a nonprofit that renovates basketball courts to “ensure all communities have a safe and inviting place to play basketball,” according to its website.

Mitchell has played for Utah for four seasons. In addition to being an all-star — averaging 23.4 points per game — he is the recipient of the NBA Cares Community Assist Award. The award was presented “in recognition of his continued efforts to advance social justice and champion education between the 2019-20 and 2020-21 NBA seasons,” according to the NBA website. NBA Cares awarded $10,000 to Mitchell that he put toward the courts at CV.

Mitchell’s mother, Nicole Mitchell, and her mother, Blossom Wright, lived in staff housing at CV while Wright worked there. Nicole Mitchell designed the refurbished courts along with Jamila Baucom, vice president for advancement at CV, and Project Backboard. The old asphalt courts were functional, but cracked. Project Backboard arranged for the cracks and uneven areas to be filled and then applied acrylic resurfacer to the courts. Tape was laid down to outline the designs, and students helped paint the vibrant colors.

“We devote a lot of our resources to making sure the kids have what is needed, and when possible, we also make sure they have really beautiful spaces,” Baucom said. “It’s not just function — these kids deserve beautiful spaces as well.”

Baucom added that the renovation was “a wonderful opportunity for kids to see the kind of support they have from others in the community.”

CV provides temporary housing for about 150 children ages 6 to 18 in foster care, those who had been in juvenile detention, runaway and homeless youth, and undocumented children. This year marks the nonprofit’s 120th anniversary in Dobbs Ferry, although the organization itself was founded in 1851.

“We are here to provide a safe, comfortable space for young people who cannot be at home,” Baucom explained. “So, we take pride in what this space physically looks like, and really work hard to ensure that young people not only have a safe space, but also are really prepared to find their permanent home and then return to their communities.”

Nicole Mitchell is now her son’s manager and runs Spidacares. She approached Baucom about the courts when she visited CV in December. While handing out Adidas goodie bags filled with socks and water bottles, she noticed that the basketball courts “were used, as in the kids love to use them. And then I thought, ‘Oh wow, this is amazing. I can take this opportunity to add more life to the basketball courts.’”

Nicole Mitchell pitched her idea to Baucom and to Adidas, which sells clothing and sneakers branded with Donovan Mitchell’s name. In March, they toured the site together, and her idea took off.

“They pretty much heard the passion in my voice,” she said after the ribbon-cutting. “It makes a great story [for Adidas], but it’s just a great thing to do.”

Nichole Mitchell later added that “We spent time here. We grew up here,” referring to herself and her mother. “This is full circle. And what touches my heart the most is that for [Donovan], he wants to do this. I didn’t have to pitch it to him.”

Donovan Mitchell graduated from the Greenwich Country Day School and then Canterbury Day School, both in Connecticut. He attended the University of Louisville in Kentucky for two years before being drafted to the NBA.

In December 2020, Mitchell pledged $12 million to Greenwich Country Day, which his sister also attended and where their mother taught from 2007 to 2019. The school used the donation — the largest single bequest in its history — to create the Mitchell Family Scholarship Fund, for students from pre-K through grade 12, and the Nicole Mitchell Faculty Support Fund, which aids teachers who demonstrate a passion for their profession. The donation will also fund the construction of the school’s Determination Over Negativity Mitchell Family Athletic Center.

“[Donovan] has a great heart, giving back is something he’s passionate about,” his mother said. “It’s just natural for him.”