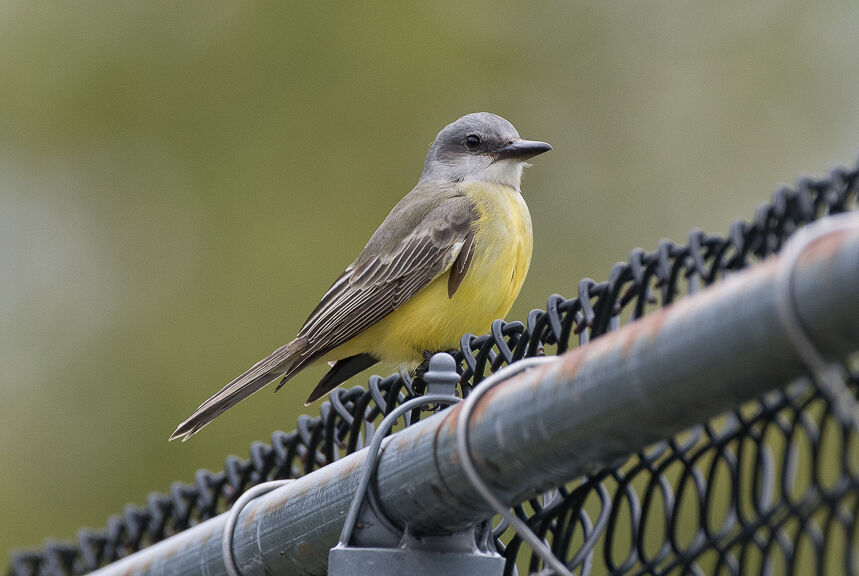 The tropical kingbird atop a fence at The Landing 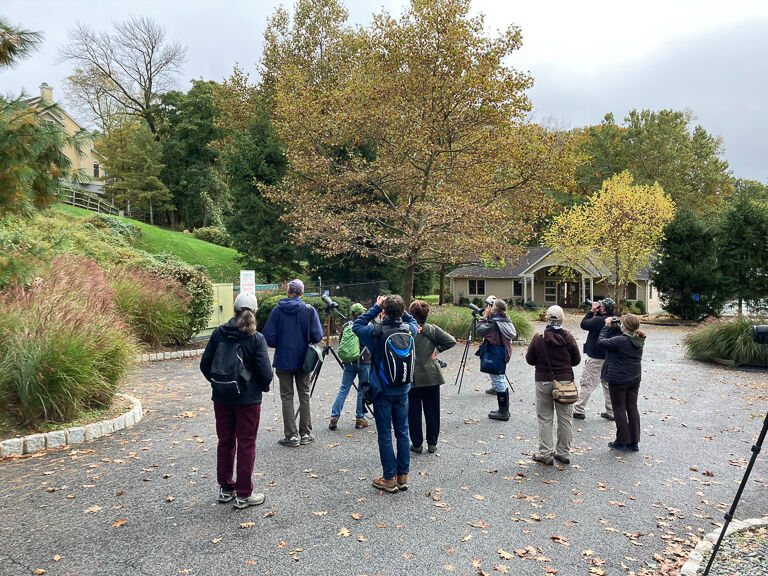 Birders watch the kingbird from the clubhouse parking lot.

The tropical kingbird atop a fence at The Landing

Birders watch the kingbird from the clubhouse parking lot.

The birding world was atwitter last week as word spread over the internet that birder and nature photographer Tom Warren, a 15-year resident of The Landing in Dobbs Ferry, had spotted a rarity: a Tropical kingbird.

This is the first recorded instance of a Tropical kingbird (Tyrannus melancholicus) in New York State; its native territory is Costa Rica, though it’s been spotted in Texas and Arizona.

Warren, 60, a retired photojournalist, was out in his neighborhood on the afternoon of Tuesday, Oct. 27, near where Wickers Creek empties into the Hudson River, when he saw a flash of yellow land in a nearby tree. He photographed the bird before it flew to three other perches and then took off, sensing the presence of a Cooper’s hawk and a small falcon called a merlin.

Initially Warren surmised that the yellow-breasted bird, about the size of a robin, was a Western kingbird, like one he had seen at Croton Point Park last year. Later that afternoon, he and Julien Amsellem, a Hastings High School sophomore who leads bird walks in Hillside Woods, saw the bird again, which they photographed. In addition, Amsellem recorded the bird’s song. The pretty warble helped them identify their sighting.

Warren registered his find on eBird, an international database belonging to the Cornell University Lab of Ornithology, then posted photos and the recording, along with his written observation, on the Lab’s Macaulay Library archive.

Other birders soon notified aficionados through the Manhattan Bird Alert and Joe DiCostanzo of Inwood Birder, who leads birding trips for the American Museum of Natural History. Birding websites were abuzz with excited comments.

Near sunrise the next morning, Oct. 28, Warren again saw the bird, near the same location where he first spotted it. By then other birders were with him, watching and listening. Mid-morning, the bird was reported near the Ardsley-on-Hudson train station. Later it perched on a chain-link fence at The Landing’s tennis courts. The parking lot near the Landing’s clubhouse offered the best vantage point for viewing the kingbird.

Warren texted the birding community, and they flocked from near and far, toting cameras and binoculars. About 100 people roamed the area on Oct. 28, including “the best birders in New York State,” Warren told the Enterprise, adding, “One boy drove from Washington, D.C., and brought his mother from Queens.”

The Landing, a complex of townhomes, is private property, so the birders were careful not to descend in a horde. Residents were curious, though, when they saw strangers — except for Warren — peering up into the trees. A couple of residents asked to look through someone’s binoculars; another asked to see a picture of the bird. When Warren’s neighbor Jan Goorsky heard that the group was looking for a rare bird, he responded, “That’s cool!”

“I think people by and large were impressed that it was such a rare happening,” Warren commented.

Despite the attention, the bird appeared unfazed. “It likes to go up very high on branches so it’s not disturbed,” Warren explained. “Everyone is very respectful…  they use long binoculars, long scopes, and camera lenses” to observe and photograph the bird.

Another factor worked in the birders’ favor. “Wednesday is normally leaf-blower day; every Wednesday they come en masse,” Warren said, referring to landscapers. “Because it was such a rainy, foggy morning, that made all the difference, because you could hear the bird and see the bird.”

As of Nov. 4, the kingbird had not been seen since Thursday, Oct. 29, but hopeful enthusiasts from Queens and Long Island arrived in Dobbs Ferry on Oct. 30.

Warren recalled that when he was 12, his parents installed a birdfeeder outside his window in Ridgefield, Conn., where he grew up. “I would photograph the birds through the glass: the tufted titmouse, chickadees… I have my parents to credit for instilling that love of nature in me,” he explained. “I’ve always loved photography and I’ve always loved birds, so they go well together.”

Warren, who reflects on his kingbird experience on his website (tomwarrenphoto.wordpress.com/author/tomwarrenphoto), said he’s received a barrage of congratulatory online comments. “‘Nice find,’ ‘awesome find’ — gee, the bird is the one who deserves all the credit here,” he noted. “I look at it as such a huge gift to see that bird, especially with all the difficulties going on around us nowadays.”

Warren saw the Tropical kingbird fly away mid-morning on Thursday, Oct. 29. “It flew off with similarly sized birds,” he reported. “When it flew off, I had the sinking feeling that it was the last we were going to see of it.”