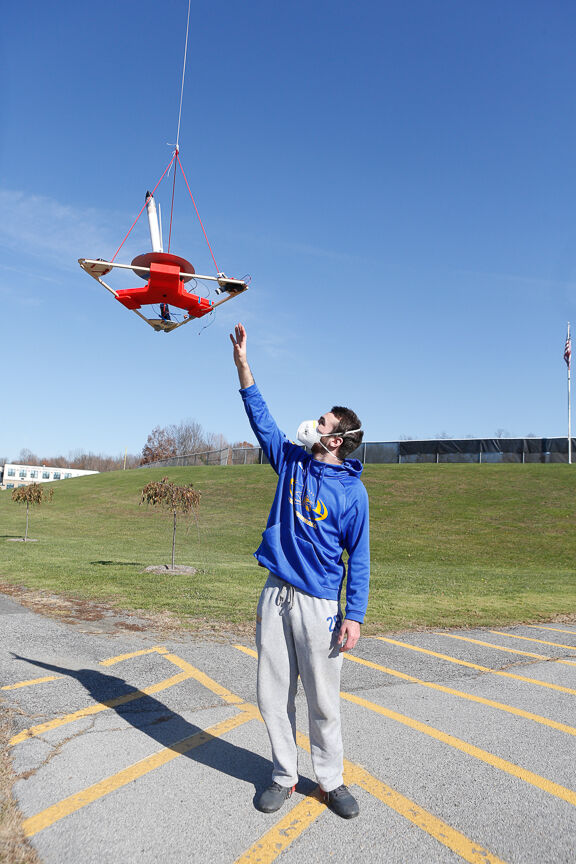 Josh Cohen lets his "rockoon" lift off in Pawling on Nov. 7. 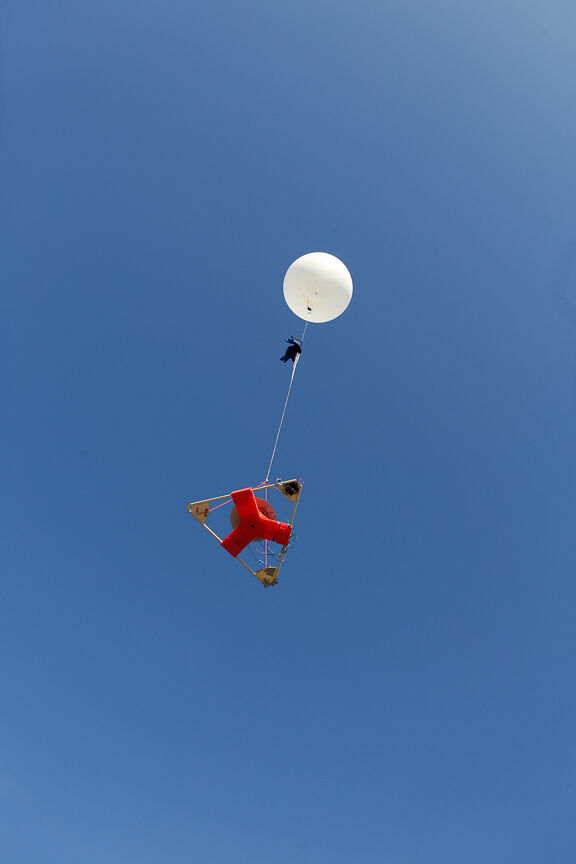 The balloon carries the platform and rocket into the air on Nov. 7.

Josh Cohen lets his "rockoon" lift off in Pawling on Nov. 7.

The balloon carries the platform and rocket into the air on Nov. 7.

A rockoon comprises a small, high-performance rocket launched from a platform suspended below a balloon sent high into the atmosphere. The idea was inspired by the Aerobee, an unguided rocket first used for high atmospheric and cosmic radiation research in the late 1940s.

Cohen, 17, created his project for his school’s three-year Science Research program. “My whole life I’ve always been interested in space and rockets,” he said. “The program is the only reason I’ve been able to explore this interest with more than reading articles.”

When he first heard about rockoons he was skeptical. “It was an old concept that never really took off, but recently with all the new developments in technology, it’s got me interested,” he said. “I can prove it has a material advantage and significant gains for launching a rocket.”

He explained the future applications of rockoons for launching satellites, which are becoming smaller and smaller. “A CubeSat weighs less than a pound and can fit into a small framework. It would be launched from a platform,” he elaborated. “My project is a scaled-down version of what would be a project to launch CubeSats.”

Last weekend Cohen was in Pawling both mornings, launching his foot-high creation — a carboard tube with 3-D printed fins and an attachment securing it to a platform, weighing 3 pounds altogether, suspended from a helium-filled balloon. Cohen built both his rocket and its platform.

The rockoon uses two micro-controllers: one launches the rocket, which can soar to 25,000 feet from the platform; the second separates the balloon’s cord from the platform. The balloon will later burst at 100,000 feet.

There are satellite trackers in the rocket and on the platform. On the rocket is an ultra-low-band radio tracker (altimeter) providing a more detailed flight path by sending information to Cohen’s phone, but “You can’t program a flight path,” he noted.

He described activating the engine in the rocket as “flipping a switch” to ignite the commercially available ammonium perchlorate solid rocket fuel. “There’s no control; once you light the engine, it goes,” he clarified.

Cohen once lost a rocket that traveled more or less horizontally from Westchester to Massachusetts. He was able to save the platform.

“That was an early design,” he recounted. “I couldn’t fit the satellite tracker on. But it gave valuable data to improve the design for the next launch.”

So far, a rocket launched from Byram Hills was the only one to land in water; it splashed down in Long Island Sound.

The Nov. 7 launch was hampered by the engine, which would not ignite. On Nov. 8, everything functioned properly, and Cohen received the data he needed to recover the rocket, which landed near Bridgeport, Conn.

Cohen projects that in the next five years, experts will launch small CubeSats from balloon and, eventually, every satellite will be a CubeSat.

“With the size of the technology going down, the whole cube and rocket should fit in an 18-wheeler, when scaled up to full size,” he stated. “The balloon would probably be a hot-air balloon that could be pulled in, not destroyed.”

Cohen plans to enter his rockoon project in the virtual Westchester Science & Engineering Fair (WESEF) next March. He is a semifinalist in the National Merit Scholarship program and a three-sport varsity athlete — football, wrestling, and lacrosse. Next fall he’ll enter Worcester Polytechnic Institute in Worcester, Mass., with the goal of scoring a job at NASA.